Sunday on my way home from a 15 hour day, I decided to stop at the Blink QC at Tahoma Market where I had successfully charged the day before.  My other option was Tacoma Mall and being a Sunday afternoon, I figured it would be packed (it was) and Tahoma Market is viewable from I-5 and it was abandoned as I rolled by at 20 mph so there I went.

But a charge was not to be. I tried both sides several times and despite everything looking functional, the station would simply not provide me a charge.  I cursed Blink and headed to the mall.

When I arrived at the EVGO stations, it was packed including a Volt on L2, a LEAF not charging on L2 but with plug locked to the car. Both QCs had LEAFs charging and one was at 36 mins when I got there. It eventually stopped on its own around 50-55 mins.  So I had 15 mins more or less before I would get a station so ran into the mall, got some food, brought it back out just as the other person fast charging unplugged his LEAF.

So I plugged in and....nothing.  Station did everything it was supposed to but timed out eventually cancelling the charge. I call EVGO tech support and they reset the machine, etc.  all to no avail.  It was now I began to realize it was likely my port.  I had nearly no range left but Puget Sound Co op Credit Union was right around the corner so went there limping into the station with 6 GIDs and...nothing.  I tried both plugs several times and nothing.

So I called a tow truck. I couldn't think of anything else to do.  While waiting for a confirmation, I reset the 12 volt battery and tried it again and it worked!! L2 was back! So I called and cancelled the tow thinking I could charge again realizing later the "thinking" part was minimal at best...  So I got enough of a charge that I was willing to go back to Tacoma Mall to try the fast charge. Made sense to me at the time so off I went with 15 miles of range.

I got there and all the stations were still full including the LEAF with the L2 locked to the car and there was another LEAF plugged into the station I had tried and was on the phone with tech support and the unit was in the middle of a reboot. I was thinking maybe the station did something to my car?  But the LEAFer  had actually gotten a charge but the handle would not unlock when the charge was completed. The reset worked and he did get it unlocked and was on his way and by then, the other station was available and not wanting to try the first station again, I plugged in and...nothing.

I reset the battery cable and... nothing.  So I thought, I guess its L2 or nothing and went back to Puget Sound Co op and plugged in and...nothing.  Well, call the tow truck again... In the mean time I was pleading my plight on Facebook and Brian suggested I check DTCs (trouble codes) with LEAF Spy so I did,  and decided to clear the codes and L2 was back!...

So I charged a bit and then unplugged the L2 and plugged it right back in and.... NOTHING.  This was not going to work.  Living on Level 2? Hmmm!!

But I decided I had to have QC so I charged for a while with heat blasting away waiting on the tow truck, shutting down just before he arrived. My insurance company has a "Tow Truck Tracker" so I know when they will arrive which is good because he drove right past me. That is Google Map's fault due to how the addresses align.  I did the same thing getting to the charging station. 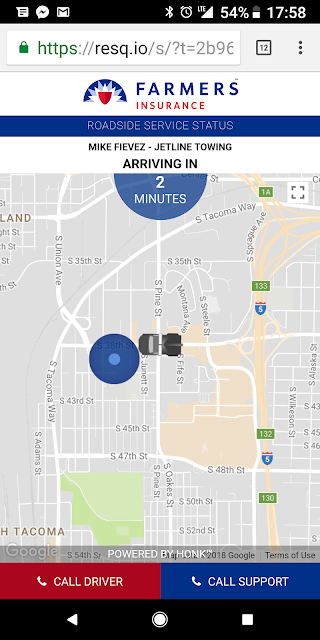 So the tow truck driver showed up, I drove it up onto the bed and he asked "Where to?"

Finally an easy answer to what had been a very hard day (starting at 2:15 AM when I left home)

"Take my car to Aaron McAfee!" I said.  A definite no brainer there!  The fact that I was a few blocks from another authorized LEAF dealer really didn't matter.  For sales, go to Ray in  Everett, for maintenance its Aaron at  Bill Korum in Puyallup 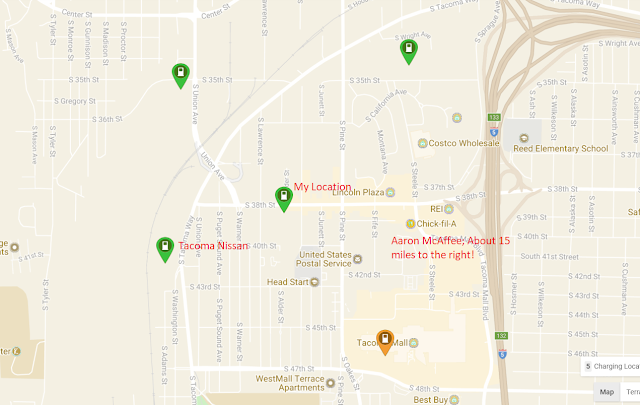 I then PM'd Aaron with my DTCs; 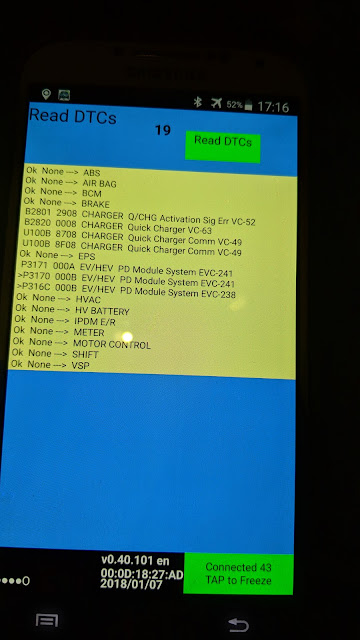 He shot back about a minute later saying PDM needs replaced. Will have to look at the car to make sure but that is what it is.  So he called his service guy to have him order the part.  Ok, so not quite as convenient as a house call but...

Naturally, the PDM varies too much to have them in stock, so it had to be ordered. (Just my luck)  But Aaron assured me it takes 1-2 days to get one so no later than Thursday.

Well, Wednesday afternoon,  Kelly the service guy from Bill Korum calls up to advise car is charged up and ready to go but it was another one of those "end to end" work days and it would have been after 5 PM before getting there and I was just too busy to do it but Thursday was an early day and she has returned!! 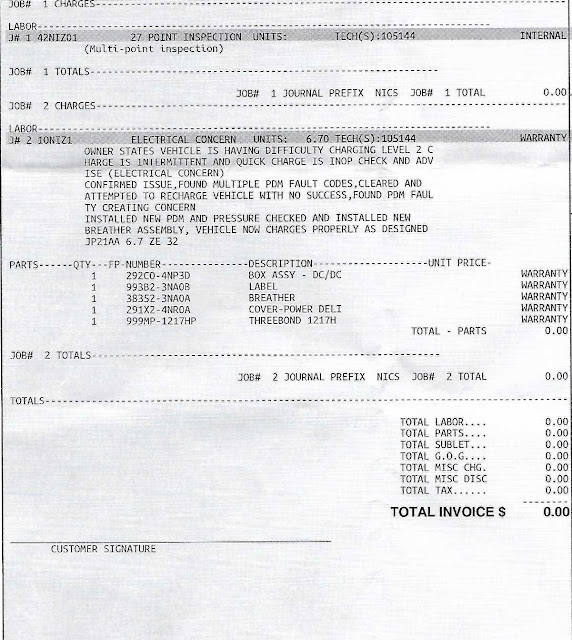 All in all, not bad at all. I haven't actually tried charging it yet and opportunities in the very near future abound so I am guessing I will find out soon but I have faith in Aaron's abilities and found that the ability to reset DTCs in LEAF Spy Pro has all of a sudden become "the" best value ever.  As I understand it, LEAF Spy Pro is cheaper now. I paid $20 (a GREAT deal) and I am glad to see it was worth every penny I paid AND all the other pennies that stayed in my pocket!

So a few comments to add

** I don't think charging on Blink had anything to do with the PDM failure. I had fast charged Saturday but also went home and did a full level 2 charge without issues not noticing the charging problems until I tried another Blink fast charge the next day.   In the blog, I had to clear the DTCs every time to start a charge.  As mentioned above, I had been charging on level 2, unplugged it for like 10 seconds and plugged it back in and it failed to restart so had to clear codes again to get the car to accept a charge.
Posted by DaveinOlyWA at 2:25 PM