Oh Where Oh Where Has My Regen Gone?

This past Summer I had the  P 3227 software update done. It was supposed to get me a better idea of what my battery pack had left, streamlined some software and other "stuff."  It was relatively painless and finished a half hour faster than estimated so all was good.

I took my LEAF home, drove it around and noticed...nothing.  The update did not seem to change much of anything that I could tell. The GOM "seemed" better but I had gotten so used to ignoring it, I probably simply failed to notice any real changes in its behavior.

Well soon  other more observant people started saying they had lost some of their regen capacity.  So I checked mine and sure enough, the last regen circle did not seem to light up as fast as it did before.  I thought it curious and wondered why Nissan thought adjusting the regen profile was needed but had too much other things going so it fell to the back of my mind.

Well now we are hitting the slow season at work and as always, my mind starts to wander when it is not otherwise occupied (can be a dangerous thing!) 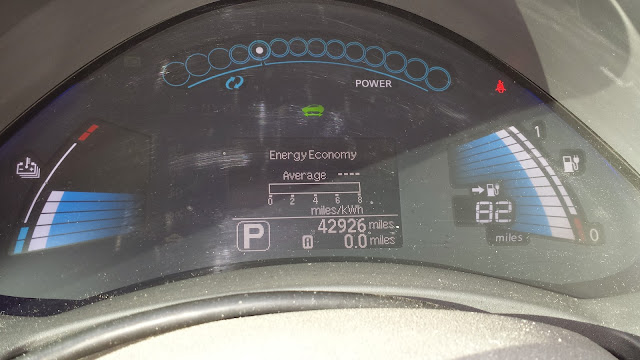 This was first thing in the morning after an overnight full charge. I reset my trip A meter daily and first thing that pops out; I have a regen circle??

Well, how can that be? Not possible. After all, the batteries are as full as the BMS and degradation will allow right?  Charge profile seemed normal. 236 GID 56.99 ahr which ahr/health slowing declining over the past few days but both are cyclical trending downward slightly which in normal as the odometer goes up.

Well, I take off and first thing I noticed is that the regen circle might be lit up but it is not available confirming that the charge was completed properly.  I purposely made several efforts to regen that single notch to no avail.  It was after 2.2 miles that I could finally do it at 227 GID which is pretty much how the LEAF works every morning.

Now the thought came to mind; what if our regen profile hadn't really been changed but the software update tweaked how the gauge works?  Besides making the GOM (supposedly) work better, it also provided a more realistic picture of our battery pack health which generally meant that people in warm weather got a temporary capacity increase while we got a permanent capacity loss.  Both of which were not really gains or losses but only better reporting of the true state, right?

Definitely worth investigating but unfortunately, despite driving the car with the energy screen on almost 100% of the time, I never paid a whole lot of attention to the amount of power I was able to regen in any given circumstances...so what to do??

Now, I have spent the better part of a few days trying to generate some cooperating brain cells from my casual observations of the regen circle in hopes of avoiding the obvious to no avail.  The regen just seemed to be...normal. Only the dash gauge seemed out of place.  It got really frustrating and time and time again, the same thing just kept coming back so finally I gave in...

Ya, remember Carwings? Tells you how well you drive verses the World, etc. If you think you drive poorly then just log into Carwings and marvel over your 6.8 miles/kwh lifetime rating! (mine is actually about 4.5)

But Nissan had an answer to that! Update the software, but due to my VIN or misinformation, I was told my LEAF was not in the "software update" range so I never got it. I admit, I only tried to get it once but that was enough. I felt I would have no use of it anyway especially after sales jumped and I quickly fell out of the top 100 in every category...that is until today.

Carwings does track all kinds of metrics for you and its wonderful and the only real knock is the "creative math" it uses to provide those metrics for you. But unless the math has been changed (and it hasnt because I have no update) then it should be consistently inaccurate which means its a valid data set (sort of...) right?

Ok, whether its right or not, its the only data set I have so I think its "right enough!"

So basically, I collected 4 data sets to catch the seasonal variances both before and after the P 3227 update which was done July 5th. (I called Nissan to verify cause couldnt remember if it was a few days before my trip to Texas or a few days after..) The data collected is average watt hours regen'd per mile computed daily.

Now we had an Early Summer which is why I started Data Set #2 in mid May and it lasted longer than normal but there was no real hot streaks. Only a few days in the 90's but consistent mid 80's weather most of the Summer so confident that Data Sets 2 and 3 reflect fairly consistent weather conditions. Data set #3 will have been only slightly warmer

So the findings?  It would appear that I did not lose any regen capability.  I am considering the option of collecting data sets from 2012 for the same time periods (although that was one of the coolest Summers in recent memory) for comparison but since there is no direct way to get there (you can see the data a week at a time so you just have to click 52 times to go back a year...) so will shelf that option for now.

Now the data collected has a VERY wide range of numbers which is the reason I just took averages over several days.  Interesting to note; both the low (Aug 20th; 21 wh) and the high (101.6 wh on  July 19th) happened during same data set.

Thoughts; No conclusions here. Not getting an updated Carwings might be a problem here.  Also collecting the data so soon after the update might also be a problem.  The decline from #1 to #4 I dont feel is statistically significant. The other obvious variance is the mileage difference, SOC differences, weather differences, driving conditions, etc. etc. etc.

Just for kicks, I collected data matching the dates of #3 for 2012. Keep in mind; a much cooler Summer that had rain, etc. (we had NO rain this Summer other than affew days in Sept.  July and August 2013 came in as one of the driest ever) and that came out at 54.54 ah...so what can I say? tossed it. Just for kicks, I also collected data from 2011 and 2012 matching the periods above. None this I present due to the drastic change in my driving patterns since taking a job in Tacoma 25 miles away verses the one I had in Lacey 5 miles away.  But the averages ran from 54.54 to 78.74 ahr/mile (proving that the opportunity to regen happens a LOT more in city driving) with individual lows of  in the 5's and 6's balancing out highs of 121.3, 118.2 (one I am pretty sure happened on my "100 mile Winter Range Test" since it was about the same time in Feb 2012)

Either way; if we had really lost most of or even a significant access to the far left regen circle, I would have thought it would have been more obvious, so I need your help.

If you have the updated Carwings Software, collect some data points (at least 40-50) and tell me if you saw any differences before and after your P 3227 update.

So is relying on Carwings for data a good idea? DK so ya, maybe its a shot in the dark but better than no shot at all right?

Report back here. As always I have reserved a space especially for YOU to respond below!
Posted by DaveinOlyWA at 12:55 PM