I have mentioned this several times so we are pretty familiar with my ahr rising when I cycle deeply or use a Quick Charger and we really don't know why, or at least I am clueless.  I don't have the lizard battery but I am confident I do have a battery that is better than what I had in LEAF I so I decided to see if I could manipulate my battery's numbers and then restore them to their former glory.

Way back in the beginning, I noticed a big jump in ahr and SOH when I quick charged but it never lasted more than a few days.  This was winter so I thought, its the warmth that did it. But then Summer arrived and my pack was in the 80's all the time. Then I noticed that driving 80+ miles and recharging to full more than 3-4 days straight also increased my numbers although not quite as astronomically as the quick chargers did. And as expected when the weekend came or a few local jobs in a row happened, my battery stats dropped just like my driving need.


So to test this, first I decided to not fully charge a while by only using LEAF for shorter commute days and timed this in a week where I had 4 local jobs.  Plus it was a good time to exercise the Corolla anyway, right!

As expected, my battery stats dropped from the mid 65's to the low 63's.  For kicks, I fully charged the pack and checked my stats; 63.84 ahr, then let it sit roughly 29 hours before driving and checking stats again and it had dropped to 63.20 without moving an inch!

The 2nd part of the experiment was to just do as much fast charging to see if that would raise the numbers like it did last Winter but this proved to be a tough one and mostly due to lack of charging locations. Here in the South Sound, fast charging locations are still sparse and I was not willing to pay astronomical rates to use AV although, I was kicking around the idea of paying $20 for a monthly subscription to try it but it did not take long to realize even AV's locations were just not convenient in my day to day driving needs most of the time. I need something going North!!

Going North, the nearest DCFC is the Blink at Fife. Now that Blink as gone to a $.49/kwh rate, this is doable. Not cheap but doable and I feel obligated to use them to show support for the new pricing model although I would prefer a time based rate to maximize the time the DCFC is available for others to use. You see, the longer you stay plugged in at a DCFC, the slower it charges as the battery pack fills up. Eventually the per kwh cost will be pretty high if there is a reasonable per minute rate of say? 20 cents or so?  But anyway...

Charging using nothing but fast charging for 4 days really did not do much. My ahr did improve to the low 64's but that was as good as it got.  I was now beginning to think I had real and permanent degradation.  The accepted high water mark for ahr is 67.36, a figure i obtained several times. If my new level is 64 ahr, then degradation would be 5% at this point and not too far off what is expected in this area.  The one thing to mention during the fast charge period was the light driving need.  42, 28, 51 and 39 miles.  Each fast charge was roughly 15-23 minutes and only once did I receive over 10 kwh.

Part 3 of the experiment involves driving the 85+ miles per day.  The best I could muster was at least 76 miles a day for 3 days in a row which brought me up to 64.68 or 4% degradation in just under 13,000 miles. In some ways I wanted to go another 1-2 days but the work schedule did not work out and my mileage lease limitations has made me hesitant to drive around for the purposes of this experiment.  The other reason is these measurements are very much an approximation so only trends collected over time should be taken seriously. Since my data is collected daily, I will as always report my findings. I have little doubt that my work schedule will provide me ample opportunities to continuously test this phenomena.

Guess I needed the combination of unseasonably warm weather and longer commutes! 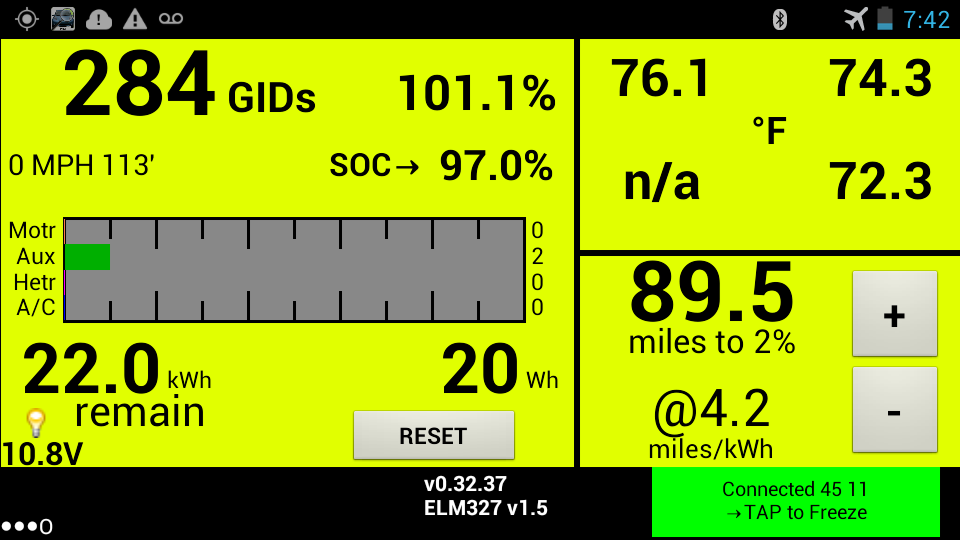 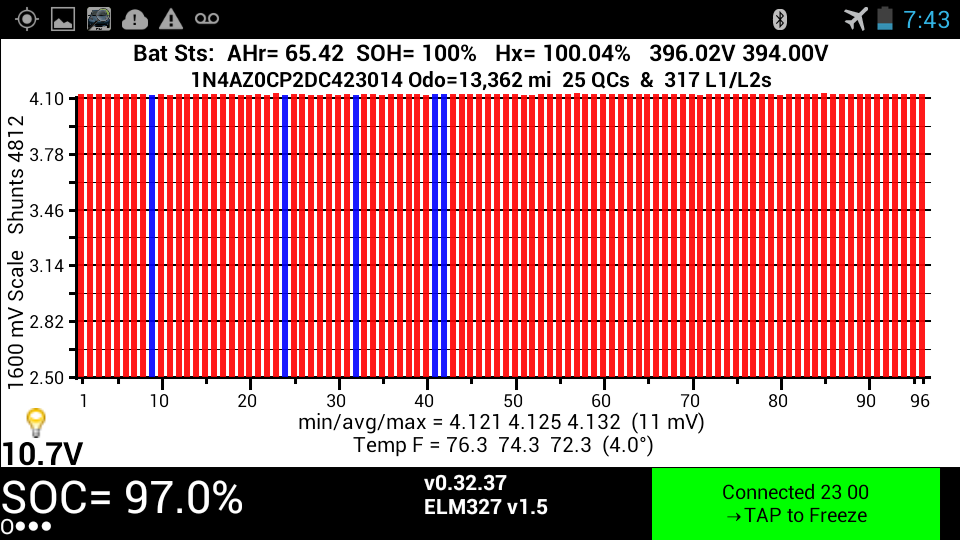 So the moral of the story?  YMMV!!

Don't forget to attend your local Drive Electric Event this week!  I will be in Stelicoom, WA this Saturday the 20th. Come on down!
Posted by DaveinOlyWA at 11:13 AM