After hearing about the power upgrades and nature trails, I decided it was worth a day trip to check out the Snoqualmie Falls.  The fact that we had just had a monumental storm and the falls were raging helped as well so naturally since the trip was green power related, I had to take the LEAF.  Now it was 66 miles there with hills so charging had to be done. Have never been in the area with the LEAF so it was very much unknown territory.

Now my first thought was simply driving there and plugging in at the hotel at the Falls but then again, it was near Winter and wanted to make sure I picked a good weather day to go. Problem with that idea is everyone else wants to go then too!

So I started investigating charging options along the route and decided on stopping at the Walgreens in Auburn which was 38.4 miles away per Google Maps.  But it was a Blink but Plugshare showed several successful charges this week so I decided that would be perfect and off the beaten trail so a queue would be unlikely.

We got there and plugged in and I mulled the thought of charging to full and completely removing any need to charge at the Falls. The day promised to be gorgeous. Not a cloud in the sky with temps hitting near 50 degrees, so I figured it would be crowded.  But soon another Black LEAF showed up so I unplugged at 85%. 6.20 kwh, $3.03.   Now, I was at 4.6 miles per kwh leaving Auburn. It was 29 miles to the Falls.  Arriving at the Falls I was at 4.2 miles per kwh and GOM said 52 miles. I was 66 miles from home.  Hmm...can I make it home?  Sounds like a challenge!

Now, I know what you are saying.  "GOM? What the hell are you doing relying on that?  I say, sure why not?  Its like any tool. If you don't bother to learn how it works, it doesn't! Simple as that.   Either way, the Falls were definitely raging and yes, the rain was falling UP!


Now the main purpose was the hike. So we parked at the top across the street from the hotel, crossed the skybridge and down down down we went. 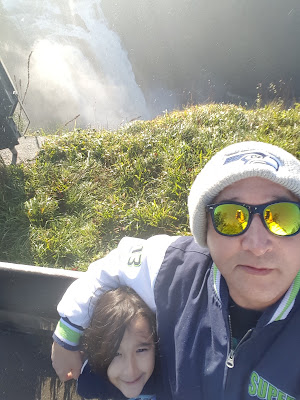 Now Runkeeper says it was only a 552 foot drop from the top to the bottom but it sure seemed a lot more than that!   Now the view of the valley was nearly impossible due to the volume of water that was going over the falls along with the not so small volume of water misting back up to us creating a pretty thick fog.

But near the bottom of the trail along the valley we found the powerhouse. The first thing that popped into my head "Wow, fuel for a year!" 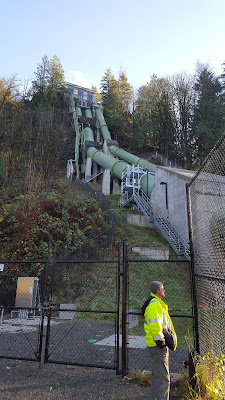 Unfortunately, what goes down must trudge back up the hill. So off we went. By the time we made it back to the top, it was determined we should find a place to eat.  This was actually a good thing because I had been mulling the trip home in my head and had determined that I would have to average over 5 miles per kwh going home and would still end up with the smallest of buffers... I think. Either way, I had resigned myself to accepting the fact that we would probably be a few miles short of what we needed to get home.  So off to Snoqualmie we went.  Plugshare showed a half dozen chargers, All Blink, All L2... oh joy...

Ok so the first one we went to; DOA. No power. Blink... Anyway, the 2nd one I couldn't find.  But the 3rd one was a success.  I plugged in and we walked slightly less than 2 blocks to the Snoqualmie Falls Candy Factory. Despite the name, they had a grill so we munched out on Burgers and Chicken Nuggets. The menu was basic but the prices were cheap and the service was quick.   We ate and spent a few minutes deciding we didn't want Ice Cream (I think Ry was a bit cold from the hike) so back to the car we went.

We had only charged about 45 minutes so we collected another  3.91 kwh for a cost of $1.52 Damn! this EV stuff is starting to get spendy!

So off we went. 65 miles more or less and GOM said 73! well, actually this is when you need to ignore it. I knew I would not get 73 miles out of it.  Now it was a Saturday afternoon and the roads wee full of Washingtonian Drivers which means accident. Bound to happen which would be as good as a 4 mile boost in range so I figured  between 55-57 mph and we should make it with plenty to spare and as always, I was right! 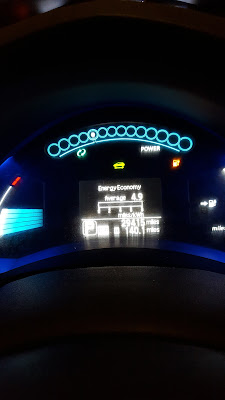 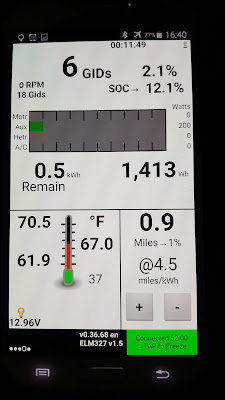 Posted by DaveinOlyWA at 5:33 PM