Bolt Winter Range; Where Is The CCS Network Going to Come From?

Recently a new Chevy Bolt owner complained he was not able to make his trip in his Chevy  Bolt easily. He stated a range of 170 miles while driving the Oregon Coast. Most of the trip was at highway speeds that were likely 50-60 mph. I have driven this route and its two lanes so rare passing opportunities if behind slower vehicles and plus stretches of twisties and turns also makes fast driving highly unlikely.   I suspect a lot of his issues were the headwinds.  So guessing he would do much better on his return trip but the real issue was lack of fast chargers that support the Bolt.

His story is just another twist on the question of "how much range is enough?" and if its concerning EVs? Well, infinity "might" do it!  But that is not going to happen and the common perception of "200 miles is all I will ever need" will be hitting the immovable wall of reality as more longer range EVs hit the streets for the less informed buyer.

I found that as much as my 30 kwh LEAF was more useful than the previous 24 kwh versions, I now still charge publicly but on 175  or 200 mile trips instead of the previous 150 mile trips that seemed  like such an accomplishment. But this is something I have mentioned time and time again; even a 500 mile range gasser will have issues if gas stations were 400 miles apart.

Why you say?  400 miles is plenty close enough if the car has a 500 mile range.  Yeah, but... Gas stations that far apart will be crowded so expect a wait. Don't expect to have a 100 mile buffer either if stuck in traffic idling away the fuel while going nowhere, during snow and rain, or simply being on the wrong side of a windy day!

But all this will soon be for naught right? Nissan has finally announced a timetable for LEAF II. Details are sketchy but expect 200 miles on the biggest battery option, etc. So now we are golden, right?  Wrong.  The fact is our public charging network is falling farther and farther behind every day.  As the range increases, EVs will become much more popular and no matter how far they can go, for some, it will not be enough.

The irony in the story above is that a lowly 100 mile LEAF could breeze thru that trip because of the multitude of Chademo QCs spaced along the route.  OR has likely one of the most developed networks for State wide travel of any in the country. 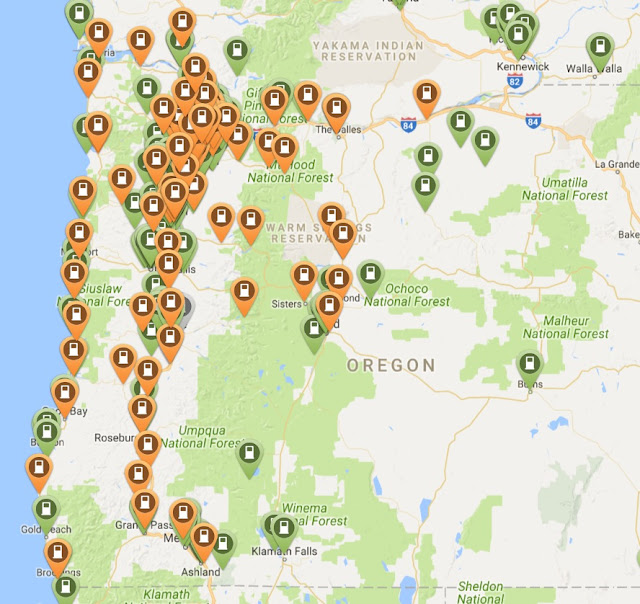 The above filters out CCS (IOW, about 2 blips removed...) Tesla SC and any other QC format.  As you can see, there are few if any real stretches for a 100 mile EV in the central or coastal regions.

The problem now becomes where is the money for the CCS stations going to come from?   Obama is gone. The big initial government cash stash is spent. To say that little is expected from the current regime is a huge understatement.  Chevy is not selling the Bolt as it was expecting to.  What appeared to be Chevy moving up its delivery timeline now appears to be excessive California cars being shipped to other states.  So whether that is true or Chevy is moving up the time line,  both imply that Chevy is getting desperate.

But CCS based EVs are growing the fastest. Ford, a new entrant, with its soon to be released longer range Focus EV will have CCS. VW promising a huge EV footprint soon along with penalties for its emission scandal promises several charging stations. Obviously dual format stations ala NRG would be the best but to my knowledge, none have been installed yet  and guessing VW has little incentive to help out Nissan, Kia and the other Asian manufacturers clinging to the chademo platform.

Furthermore; Tesla has announced plans for the biggest expansion of the Supercharger (SC) network to date. Partially to prepare for the huge uptick in Tesla's on the road when the T3s start rolling off the line later this year (maybe) and partially I think to put the seed of doubt into anyone who is thinking about jumping ship to the immediately available and longer range Bolt.  Its hard for me to believe that American and European manufacturers are sitting back thinking they can still sell a car that has no public charging support.

So I am fully expecting a big announcement; a partnership to install stations or at least smooth the way for the installs. Dealership based installs have been a shaky option thus far and there is quite frankly not enough of them in many areas to make an effective network.  Also dealerships have not proven to be good hosts. Either thru restricting who can charge, lack of 24/7 access, ICEing the stations or simply being too slow to address maintenance issues.

Either way; something big needs to happen or the Bolt may flounder. Don't get me wrong; Its 240 mile range will cover the needs of a lot of people but without public support, it still falls short of mass acceptance.

Finally; Tomorrow, I will be testing the viability of  the network in my LEAF.  Not quite recreating the trip from above but will still be doing 300 miles.  I will be doing the Oregon Coast but will be waiting until the renovations at the Tillamook Cheese Factory is completed first!

**EDIT**   Just found out VW has submitted plans on how the money will be spent and its still primarily on public charging and it looks like it will be dual mode stations so CCS will be coming from at least one manufacturer! (this makes it easier to understand why the others are just sitting back observing)
Posted by DaveinOlyWA at 9:15 AM