Ok, so I drive a lot.  I hear about others who think they drive a lot but then they faint when they see how much I drive so "again" I got a 15,000 mile annual lease (drove OVER 26,000 miles last year) and my dealer happily complied with my request while crying... BUT

My plan is to change jobs this year.  I  am aiming to find something that has much less driving involved. Not sure where but the reality is I am far from being well paid now so getting something else probably won't be too tough... Hopefully. Besides, I have over 8 years experience at the current job including the last 5½ years so its simply time for a change!

Because nothing is settled, just driving around for the sake of science is not something I can afford to do but Friday, I was left with a great opportunity when I realized that I had enough range to make it home easily so I felt this was a great opportunity to do two tests at once!

Range test. I did a full charge Friday morning and then spent 115.5 miles trying to wear out the battery. The battery won.  I was doing a medical clinic run of 10 assignments at 8 different locations.  So a lot of street speeds mixed in with 70 MPH freeway sprints for all but about a 6 mile stretch on the 167 to 512 where it was closer to a 45 mile jog.  There was occasional rain but by and large, mild with only short stints of defrost to clear the windows.   When I said I had enough range to make it home, this was without the help of LEAF Spy since I pulled into the garage with 42 on the GOM.

Naturally, the I-5 slog past the Tacoma Dome was moving at its normal speed... 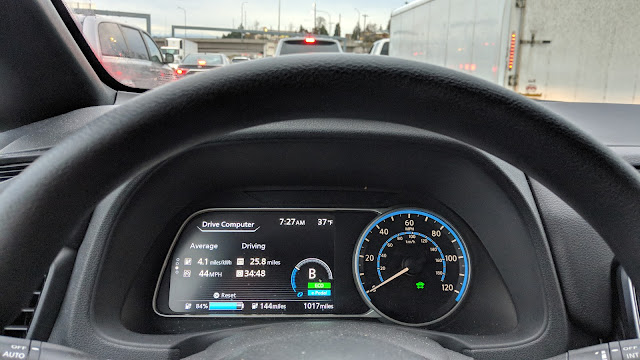 Any way to get to my 151 mile EPA rated "gotta stop now" situation, I needed to get to 35.5 miles.  So I planned out a route that was roughly 146 miles because I didn't want to cut it too close and then not be near a fast charger.  But the weather was a LOT nicer than I expected. It was clear, Sunny and in less than 10 minutes on the road, seat and steering wheel heaters were off and the windows were cracked. It was THAT warm!


With it being so sunny, I had enough extra range so detoured to get car washed. In my previous blog I mentioned that on day 6 or 7 of ownership, someone hit my car at either the Everett Speedway or the Dash Point (Federal Way) Walgreens parking lot.   Since the parking lot was all ice, I suspect Everett but because of that, I have been hesitant to wash the car because the dirt hid the scratch fairly well... 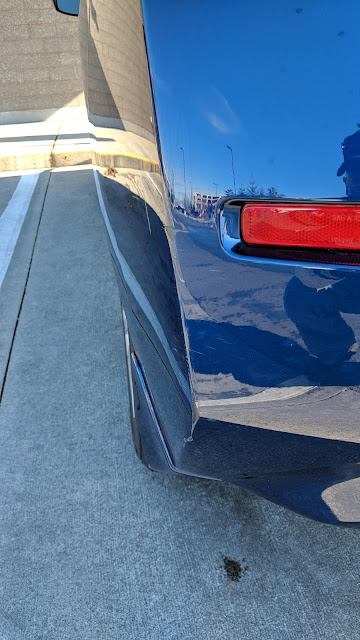 Less than a mile from the car wash,  Low Battery Warning! I should have had LEAF Spy trip meter set but... oh well.  Notice estimated range on GOM. 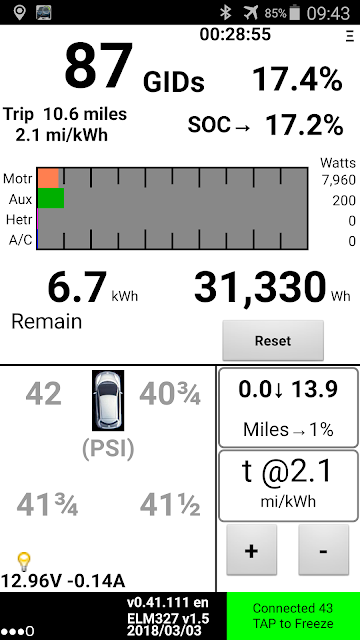 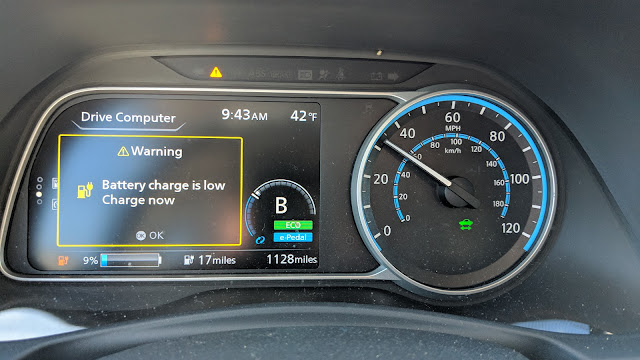 Just like clockwork, warning comes on right at 87 GIDs just like the other day.  I now realize that I have waaaay too much range left so despite the warmth, sunshine AND the rolled down windows, I am now using heat and defrost as "Turtle Bait".    Traffic is not agreeing with me but then again  we are approaching the Tacoma Dome and the reality is... all is normal which means slowing to 20 mph.  I now realize that I have to go the full (or nearly) 151 miles...

Thanks to Defrost!,  VLBW comes on at 4 % (just as I predicted!) Notice  estimated range of 17.1 miles to 1% (now set unlike pix above) that matches estimated GOM range at LBW? 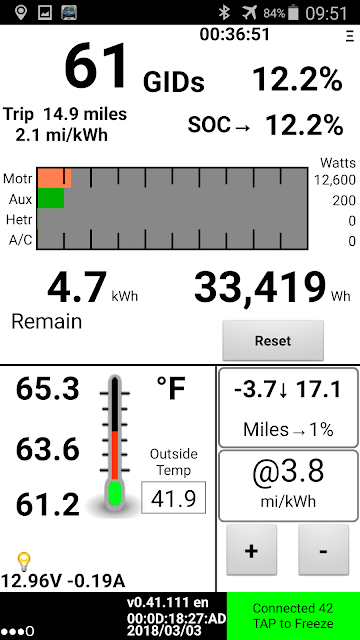 So now, I am racing up and down Pacific Highway in front of the Emerald Queen to get to my 151 miles and finally got tired of it... and stopped at 1% 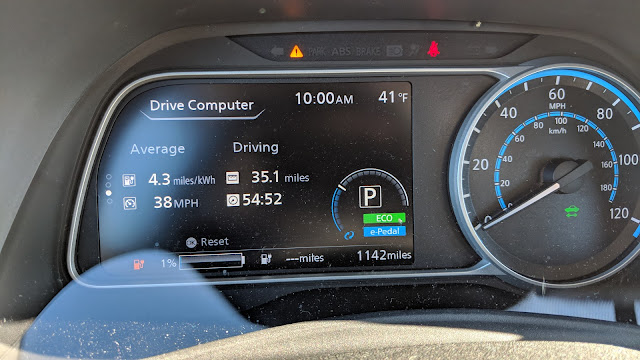 FYI; Blinking bar on GOM has been on for like 8 miles now so I should be on "fumes", right? Well, at 3.8 miles per kwh to 1% SOC, I actually had 13 miles left!  I could literally have been driving blind for over 21 miles! 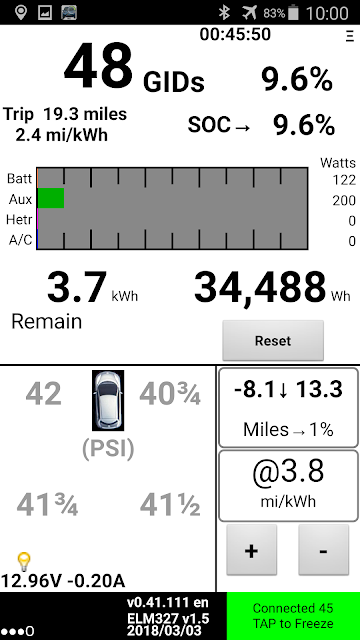 Conclusion; Yeah shoulda driven around more but go back to Paragraph one for an explanation.

Thoughts; Why did Nissan hide so much capacity at the bottom? Is there something they know that no one else knows? The general consensus as I understand it is very low SOC is ok and very high SOC is not.  So why is Nissan allowing a High SOC and doing what they can to prevent us from visiting very low SOCs?

As mentioned in my Feb 2018 Driving log, my batt stats have not been consistent. Both my ahr and SOH have steadily declined since day one while my Hx has gone thru the roof.  Full charges have been anywhere from 95.5% to 99.5%!  Below is list of full charges. Keep in mind; my log lists driving from the day before with LEAF Spy readings, the morning of.  For example;

Now previously, my stats were boosted by doing a lot of QC's, sometimes as much as 5 a day.  But with the longer range, it simply wasn't necessary to stop. I simply didn't see the need when I realized I would be getting home with 40-50 miles of range left.   But now I am seeing what a lot of LEAFers are seeing; a slow steady decline in battery stats.  Now, SOH and Hx do not concern me. They move a LOT but it was over 20,000 miles before my 2016 S30's ahr dropped from the max ONE TIME!

Right now, I am not even sure what the max Ahr is so I decided I am doing nothing but QC's for the next several days to see if I can find out!  So plugged into the Blink at Tahoma Market.  Charged 29 mins finishing at about 60% (interestingly, the car is almost the same now...) 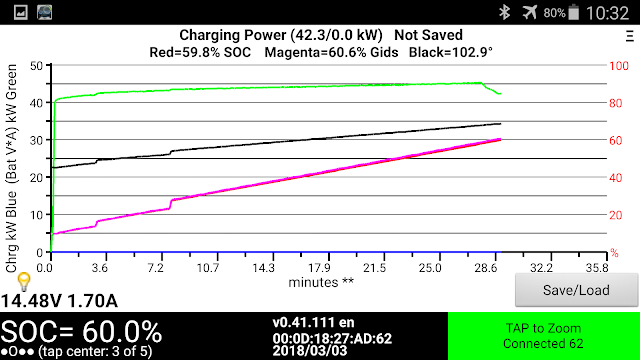 Those bumps on the graph is when LEAF Spy lost focus when I powered
off the car. So for the future, will leave car on all the time.

I then left there going straight to Tacoma Mall to plug into the EVGO and started at 100 amps instead of 120 but it dropped to 80 amps within a minute or so.  Unfortunately,  LEAF Spy lost focus when the car was turned off so graphing is not smooth here. Still ended with a decent charge rate 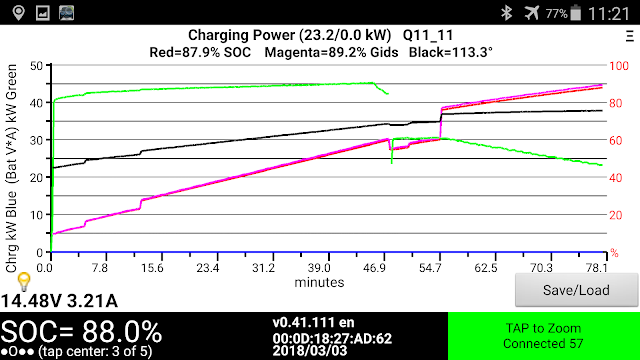 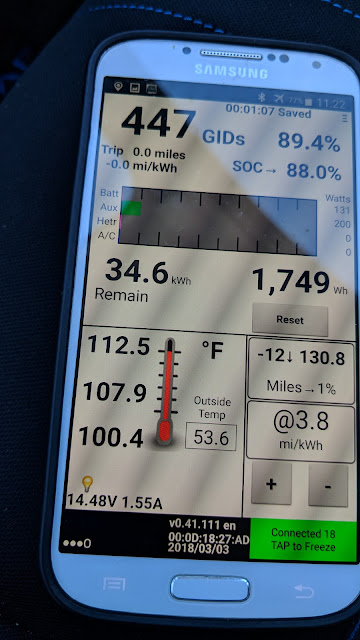 I am running LEAF Spy on two phones but both are having issues.  Could be the dongle I am using which was an "original" given to me like 5 years ago or so.  It might need to be updated.

As you can see on the graph, the blue line is not working. My odometer reading is not updating either although it did move a few miles yesterday for the first time in over a week. Very strange but the 2018 is still very new and I have full faith that Jim the LEAF Spy developer will get it figured out.

Its only day one of the experiment so we shall see where we are at next weekend. As luck would have it, I have 2 local and one very near job so piling on the mileage this week will be a bit of a challenge. Add to the difficulty that AV is currently still not compatible with the 2018's and Olympia Nissan's QC is down (Again!) so no local watering holes for me!  But EVGO at Tacoma Mall is a mile from my office so I will probably be stopping by there a bit this week so stay tuned!!

I am back!  Ok, test two failed.  I was not able to raise the ahr or SOH. They both continue to drop and worse; LEAF Spyers were reporting greater than 100% SOH (Lucky Dogs!) so the developer reconfigured the formula and I instantly lost 2½ %!

But I also fell into a good test of the range again and this was prompted by a comment below stating that Turtle would have been reached by me shortly afterwards on my test above had I not stopped to charge.

Well, didn't believe that for a second! So had to find out!

The scenario; Fully charged (not very full actually but close enough!) and drove to Bremerton WA for a ships tour.  Trip home slightly slower with a lot of road at 55 mph but the additional range of the LEAF meant not having to take the Tacoma Narrows Bridge home and paying a $6 toll!

Here is end of day one.  The average MPH is misleading since its based on all on time and we did sit in parking lot in Bremerton eating for about 30 mins before actually getting out of the car. 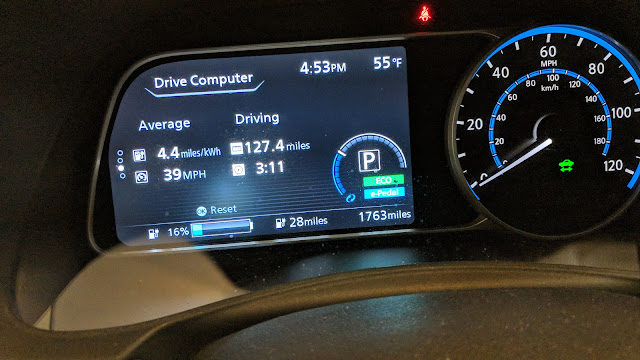 Like the previous GOM, we do not get a countdown to one so its important to note the trip mileage, GOM and odometer which I have left up for all screens (unlike Test one above...) 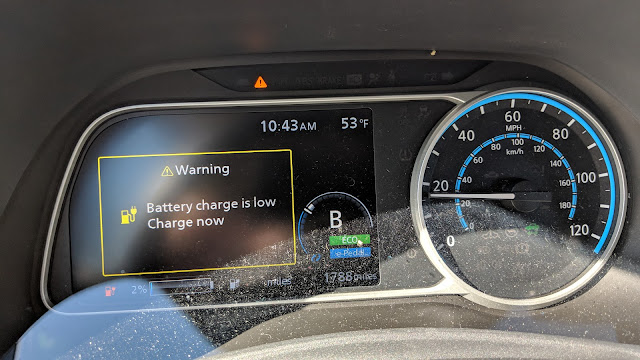 So here we are at VLBW 25 of 28 miles down the road.  Now part of this is when I hit LBW, I changed from errand running to driving around between charging stations in case Turtle did pop up unexpectedly.   So now we are at 50 GIDs which should be good for about  3-4 GIDs per mile minus say 4-10 on the bottom for buffer or about  12-14 miles. 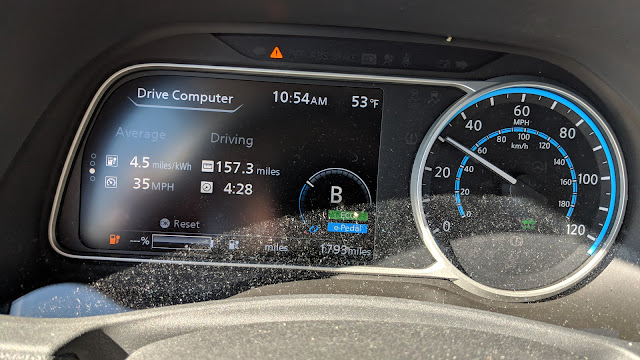 So above we had VLBW which was clearly at 1788 miles on the odo but then at 1793 miles we get the "_ _ _" on the SOC meter so this is "VLBW 2" or was the above  "LBW 2?"   Interesting... Well, have to name it so at first I thought "Super Turtle" but that would be misleading because there was no power loss although some power bars do disappear (see below) before Turtle arrives so I settled on

Remember the Legacy LEAF?  It had a power meter that consisted of 9 power circles and 4 regen circles? Double walled circles meant that they were available?  Well, my LEAF has segments; 36 power segments and 18 regen segments.  So like the Legacy LEAF, I figured the disappearing power capabilities would be the best way to go for monitoring my LEAF's progress to Turtledom.  And initially this was true.  Soon, segments started fading...well, at least a few anyway. 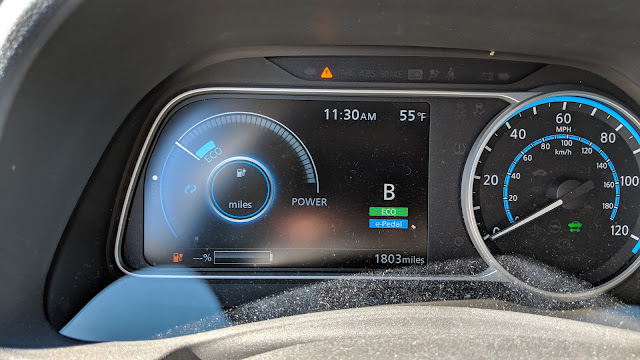 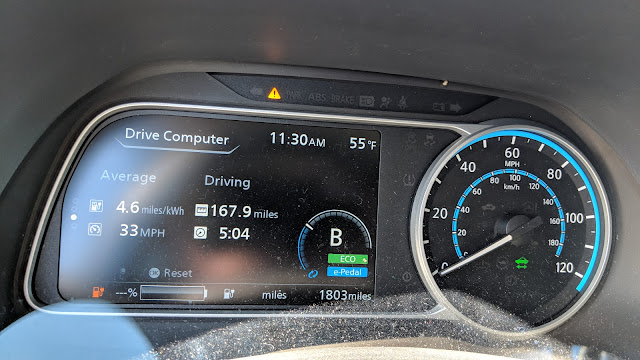 So now I am basically circling a half mile route (farthest I dare go from the plug...)  thinking any minute now, the segments will start dropping like flies. I spent most of the time on the power screen and... WELL THIS IS BORING!!.  Where is that damn Turtle!...  So I picked another route that lessen the regen (I actually added a segment back because of regen!)

Finally I get this! But also lost 18 segments all at once!  So much for the Turtle doing his polite entrance! 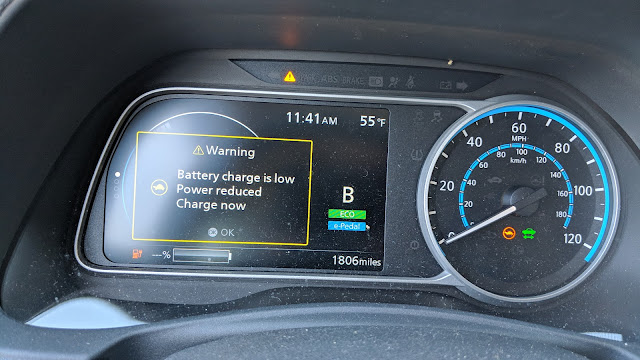 So I plugged in after spending EONs getting to this point because I got the waylaid impression that LEAF Spy was not accurate... 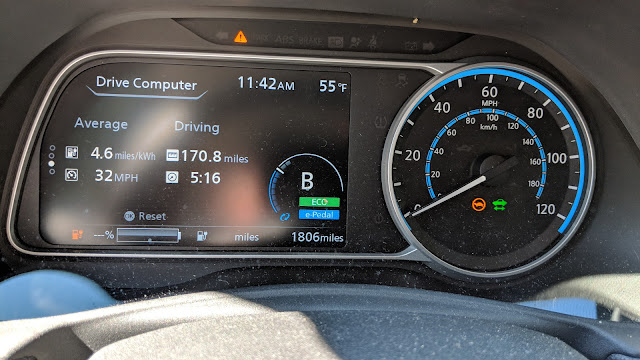 But it would appear AGAIN, that GOM is BS (on the good side this time...) and LEAF Spy is the one if you really want to know what your range is.  Below its interesting that LEAF Spy shows .6 kwh remaining. I am pretty sure (and since I won't try it) that I did not have a mile plus left to drive.  But my lack of top end balancing makes me think my pack is not all that balanced (which in itself is not a bad thing... well, unless you are trying for 175 miles!)  which might have lended to this. 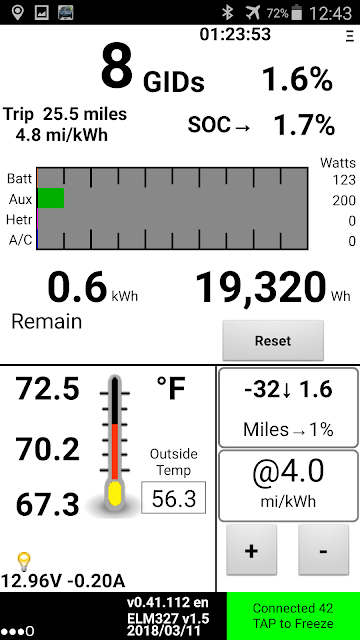 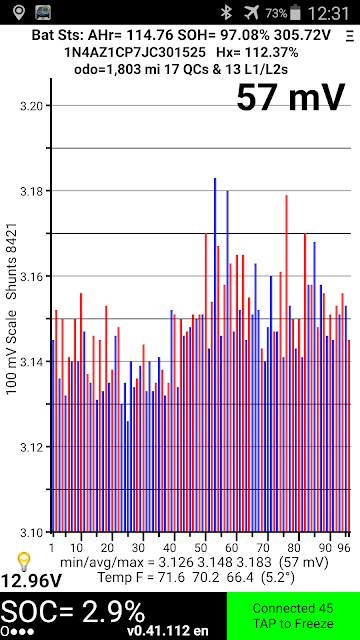 Posted by DaveinOlyWA at 8:10 AM