To Tax Or Not Too Taxed!

In Feb 2018, I leased my LEAF sales tax free making it the 5th "new" car in a row I had gotten sales tax free dating back to May  2009 when I bought 2010 Prius under the "Prius Priority Purchase Program." IOW, WA was going the extra mile to get its residents into greener transportation.  Yes Folks, that was a DECADE ago. 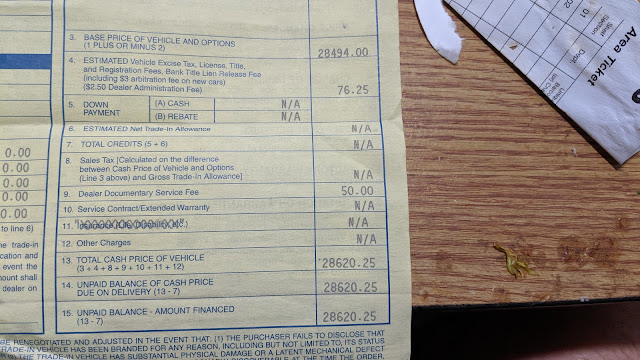 But the sales tax incentive for WA ran out a few months after my LEAF came home.  As we should have gathered from the statement above, this was quite the turnaround in stance by the State. The tax waiver expiring did not sit too well with any of us but TBT (truth be told) the law was archaic, weak and did not really address the rapidly changing market.

Where We Have Been

Like any benefit, there is some give and take. Initially, the sales tax covered hybrids due to a higher sales price that did a great job of lowering the cost of the technology. As hybrids exploded, the tax expired (My Prius was purchased 12 days before the credit expired) and the credit was then applied to the new tech AKA "100% Battery Vehicle."  All EVs qualified, even $120,000 Teslas.

Then the Oil Lobby started throwing its weight around and an EV Tab fee was added. It started at $100 and was solely to be used to cover what would have been collected in gas taxes. WA pays a combined 62.9 cents per gallon (44.5 cents state, 18.4 cents Fed for gasoline. Diesel is slightly higher) In a 30 MPG car, that would cover roughly 4800 miles, a distance very few around here drive. IOW, EVers were by and large, underpaying.

So the EV tax was raised to $150 (Before you start screaming, the gas tax went up 7 cents a gallon at the same time)  but initially the first collections at the higher rate would be put into a fund to expand public charging. The EV tax credit also put an upper limit on the perk all but eliminating Teslas and other high end EVs.   The results of that expansion first showed signs in Central WA in Ellensburg with a Greenlots station that bills one of the highest rates for power in the State.  The time to collect for the project was barely a year but there is no clause that drops the EV tab fee but then again, the gas tax didn't go down either.  Instead the State put 15% into the "Transportation Improvement Account" and 15% into the "Rural Arterial Trust Account (RCW 46.17.323)

Why The Old Way Was The Bad Way

Even at $150, we EVers were by and large, underpaying.  Gassers are getting more efficient but even a 35 MPG car would only make it 8300 miles with only $150 in gas taxes. The tab fee going up? Well, saw that coming a mile away.

Although the Chevy Volt came out the same time as the LEAF, it was simply skirting its responsibility.  I knew a guy who lived in Yelm, worked for the State and NEVER bought gas. His Volt easily made the 20 mile drive to downtown Olympia where he was plugging to the Blink L2 (when it was free) and walking 2 blocks to his office. Later he transferred to Tumwater which was an even shorter commute.  IOW, he was paying little if any in gas taxes. Later Volts' range increased resulting in less reliance on the pump.

Benefit for the rich

This ideology is pure BULLS***! I am as far from rich as you can get on this side of the poverty line. What passes as middle class in many areas of the country is simply not viable here. Nevertheless, the EVer somehow got this label slapped on them.  I drive EVs because I can't afford to pay for gas! Its too much money!

So how did this misconception start? Well, partially because it was all about new cars. The unrich does not buy new cars that much and the new reality is that THE fastest growing segment of the EV community is the "used" EV.  The thought of getting a cheap LEAF for $4,000 (yes they are around) that would only be used to bomb around town dropping off kids at school, grocery shopping, and basically any other errand that KILLED a gassers MPGs was a tough TCO with that $150 tab fee!

The Phoenix Has Risen!

Yep, WA Legislature works EXACTLY like the mythical creature (especially the crash and burn part...) Since I am not a political person I will not speculate on the ideology of amendments,sensibility and flexibility.  No matter, the old law was dead and rightfully so but it left a void.  A BIG ONE!

A new bill was immediately written and agreed upon in both houses but failed to come up for a vote before the legislative session ended.  But it was one of a dozen green proposals on the table and as part of HB 2042 "Advancing Green Transportation Initiatives" it was passed and will start doing business on August 1st running 6 years.

For the first time ever, WA will cover the sales tax on the first $15,000 on a used EV purchase (as long as its under $30,000)  This is BIG BIG BIG!!  We need to get a greater investment into EV tech and getting lower income mix is the key.  This remains the same thru out the entire 6 year period.

Plug in hybrids will now have a $75 tab fee for their electrified half which for many will be a bargain.

Ok so we have won, lost and boot scooted sideways but if social media resembled real life, it would be a lose lose all the way around!  Why??  Does it "really" take one person driving 4,000 miles a year to turn the entire populace into a mob?  Do we really want no tax incentives and a $150 tab fee? Well, I sure as hell don't! I am not even in the market and I still favor the new fees simply because it does encourage EV adoption.

On a new qualifying EV, we are talking $2500 more or less (depending on where you live) off the top on the purchase. Unless paying cash, that is $2500 PLUS interest you are saving.  That is OVER 10 years of tab fees! I mean how can "anyone" not see the upside of that?

Lets use real numbers; You get an EV, you put down some cash, you get a 5 year loan at 4.74% (from bankrate.com which means you can probably do a little better)

This fee structure does not favor the EVers whose needs are very modest. My nephew used to live in Seattle and despite being in a two worker household, both he and his wife used public transportation 99% of the time. The car was only used for out of town trips or special "events."  They did have nights out but Uber or Sound Transit was their designated driver. The car? Well, it spent most of its time parked at my Sister's house (conveniently located a few miles from the Southworth ferry terminal) where parking was free.  Needless to say, their cost per mile was well above the average since insurance rates do not go down when they were averaging 2,000 miles a year.

TBT; I don't know if there is a "good" way for people in the same boat. The cost of everything is going up but few as fast as housing and transportation.  I did participate in the recently ended RUC Pilot which investigated the ideology of a pay per mile fee based system that would replace the gas tax. This is a mistake, a BIG one.  The pilot centered on using a 20.4 MPG fleet average for the state divided by the State gas tax to come up with a 2.4 cents per mile figure.  IOW; the biggest users of gasoline would now be on the EXACT same level as an EVer not using ANY gas or expelling carbon or choking our children. During my year of driving, I would have paid over $400 in fees.

But the real result of RUC would be a massive shift of money from highly efficient drivers to the very high consuming drivers. The program by design would not generate more revenue.  The only way I could support RUC is if it was in addition to the current gas tax and EV tab fee program. Cut both the gas tax and tab fee in half and that means the new fee system would be an overall income generator.  But let me be clear, I am COMPLETELY against RUC.

Getting the people who need it the most into EVs is where we need to be. As we all know, gassers suffer the most doing the mundane short range errands that we all have to do in bulk.  There is simply no way of getting around that in Olympia due to an extremely inadequate public transportation system. Outside downtown Seattle or other major points (Universities seem to do well) in the city, many find themselves in the same boat. So making used EVs a good deal is important.  Now we do have to realize our thoughts on budgets override reality, logic and sensibility. We have always favored the "gasser business model" of low entry price offset by large ongoing costs and yeah, this new fee structure does follow that process.  But as long as we continue to support the funneling of money to the super rich and MegaCorps, support money will continue to be eroded which means costs to us will continue to rise.

Another thing that we have to consider is "EVness"  Its an epidemic...or at least it should be. I don't have to tell you how addictive EVs are.  But right now, its not an epidemic and that is due to exposure.  I feel quite confident in my beliefs that making used EVs attractive will be the best way to increase EV awareness and penetration into the "new" EV market.

Yeah, I know you thought this would never end.  The new fee structure is not perfect or even close for that matter. But fees are needed in one way or the other simply because no fees is not an option. In a perfect WA, we just raise the gas tax another 10 cents a gallon and leave the EV tab fee as it is with the sales tax incentive but that is not how WA works.

Putting all EVs into the same bucket is a mistake and a better way to do it would be basing the tab fee on range. Under 100 miles; $75, Under 200, $150 and so on. This allows the used EV to be much more affordable, helps to address the user with very modest needs and also gets the money from the people most likely able to pay the fee and eat too.

But we are still being crushed under the weight of Big Oil and that will continue to be true as long as EV adoption remains in the low single digits.  So I wrote this blog mainly to illustrate 3 big issues;

1) No pain, no gain. EV fees are high but only because our voice is small. Bailing out to gassers is EXACTLY what Big Oil wants us to do. We cannot let that happen.

2) Adoption needs to happen faster and the #1 area we need it to happen is lower income people who tend to live in town, take less long trips and primarily use their car to get back and forth from work. EVs are super cheap to operate.

3) No change is possible without a lot of money. As early EV adopters, we have taken on the role of paying that extra money to smooth the way for the people behind us.  But negativity is a powerful thing. A single negative word WILL prevent a dozen future EVers from experiencing the freedom we all enjoy every day.