Knowing exactly how far you can go in your car has been Man's quest since the dawn of the automobile. Hundreds, maybe even thousands run out of gas every day due to their miscalculated risk from that remaining sliver on the gas gauge.

Having an EV does not make that calculation any harder,  just have to do it more often.  I calculate my remaining range nearly every day to make sure I can make it. I usually have to adjust my driving habits early to account for the planned trips for the day.  Helping me with that is the "GID Meter" which is a CAN monitoring device designed by MNL'er Gary Giddings.  It tells me a very good approximation of my GID count which allows me to track how many GIDs  I have used so I can use my trip meters to determine how far those GIDs have taken me and with previous experience with the planned route of the day, should tell me whether I can make it or not.

All that means a lot of math on my part which is ok. Its not complicated or difficult but there was a lot of things that the GID meter did not provide at all.

To better understand what I am getting at, lets talk about last Summer. Last Summer was only slightly cooler than normal. We had mostly cool rainy weather up thru nearly the middle of July (about 1-2 weeks longer than normal)  then dry but not very warm weather for July with the real Summer weather in August running up thru about mid Sept.

This year, we had one of the warmest and driest May and June and that has extended into July and August.  Now, we had a downpour (one of the hardest rains I have ever experienced anywhere!) last Thursday which I am guessing will create stats that one will look at next year that will make the numbers from the Summer of 2013 blend into the masses...

Either way, my GID count which has been discussed often here was in the upper 260's low 270's in April which included an occasional 275 or so.  I was very impressed that after 30,000 miles, my batteries were holding up so well.

But then the heat started and my batteries declined almost instantly to the mid 250's. I got the software update that was supposed to increase accuracy of gauges and saw another quick drop into the mid 240's that continued until settling into the mid 230's.  Since it all happened right when the heat of Summer did, I felt the coincidence to be a bit too much to ignore.

Than Jim, another MNL'er came up with an Android based monitoring system that provided much more information including battery temps and individual cell voltages. This would allow me to see if there was a loose correlation between GID counts on a full charge and battery temps along with checking my pack balance. Software is here

I wanted to use my old Droid Bionic because it had better batteries but it simply would not connect to the ELM. After determining I was doing everything right (after all its like setting up any other BT connection. very easy for anyone interested in doing this!) I figured phone did not work. It had droid version 2.4 (i think) and most of the phones on the compatibility list seemed to have version 2.2) so I wrangled my ancient Motorola Droid X from my Son (he uses it to play games and you tube)  and the program worked like a charm.

Today was first day I had a chance to do a full charge and actually look at the data (just because its Labor Day weekend does not mean I get the weekend off. I do get today off and that is about it!) 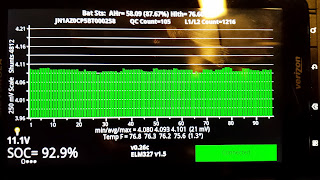 This screen shows each cell module voltage (good balance here! 21 mV difference) and my estimated capacity of 58.09 AHr (full capacity about 66.6) or 87.67% which aligns closely with my GID percentage from a "full" 281.  Battery Health is76.6% (a measure of internal resistance. more on this later as soon as I find out what it means) and all batt temp modules running around 76º.  This charge completed at 1 AM and this pix was taken at 6:30 AM. 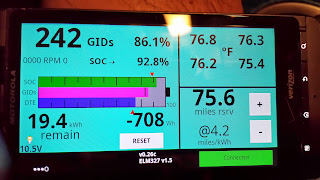 Here is another screen that adds estimated range. This is shown at 4.2 miles/Kwh which is basically about what I get if driving along at 60 mph per LEAF speedometer during Summer.  FYI; during the time I was playing around, my SOC actually dropped from 93.3 to the 92.8 you see here... Gives you an idea of just how weak the GIDs at the top of the pack seem to be.

For anyone out there who approaches the range of their LEAF, a monitoring system is vital to have. This allows one a much better picture of just how much is left in the batteries. Steve Marsh; our local LEAF mileage champ (probably #1 in the entire country!)  was stopping 1-2 times on his daily commute to charge on the road due to range anxiety. This meter has allowed him to not stop. So, ya he is pulling into work maybe on his last mile but after all, that is all he needs right?

The best part of the ELM option is that its cheap. Even if you dont get a device given to you, they run under $20. Same with the phone. I am using a Motorola Droid X which was the top of the line Android Phone...about 4 years ago!  So it or something similar can be had for no more than $30 at a used cellphone store or online.