May 2016 Drive Report; Running Backs Need It, Gymnasts Rely On It. Balance Is The Key

Another month down and only 17 days left of my 90 days of free fast charging which means I need to get busy to make sure I get my $50 worth!

First off, the price of gas is skyrocketing! I filled up last week for $2.389! which was 27 cents higher than my last fillup on April 13th...Not a good trend but somehow I will survive. Thank god I was barely under half a tank on the fill up so it only cost me $14.72

The LEAF went slightly farther at 1491.1 miles costing $24.19 in home juice or 1.62 cents per mile. I did manage to squeak out roughly 379 minutes of fast charging at various locations which amounted to about 87.98 kwh.  That doesn't add up to $50 if I use the right kind of math so will have to make a final push before my time runs out on the 17th of June...


As we all know, battery stats via LEAF Spy or other apps that are available can be quite variable.  Part of the reason very well could be balance.  The LEAF BMS charges based on the highest voltage reading of the pack's cells.  This makes sense since overcharging will quickly degrade the cell's ability.  But when the pack has a large delta between the highest cell and the rest of the pack, range suffers.  The range ends when the lowest cell reaches the cutoff stage. The voltage of rest of the pack doesn't matter. This is why we have reports of people with bad cells who will be driving along with a range of 50 miles on the GOM and suddenly shut down, out of power. 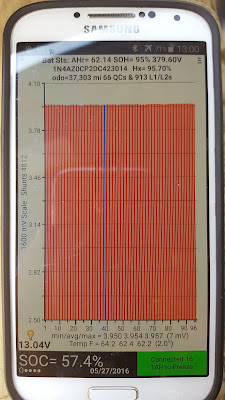 I snapped this pix of my LEAF Spy the other day. Notice the SOC at 57.4% with voltage delta a mere 7 mV.    Earlier in the month when my ahr was dipping into the 58's, I was averaging 20-30 mV deltas. Now to be honest, I had not paid an extreme amount of attention to such things until I read a post where a few people were seeing lower than pack averages with specific cell pairs so I started paying attention to this.  Well as you can see, nothing was really sticking out. So I continued to monitor the situation waiting for a runaway cell to appear.  Even my "out of balance" readings were pretty even. But it was this looking back and forth where I noticed the differences. 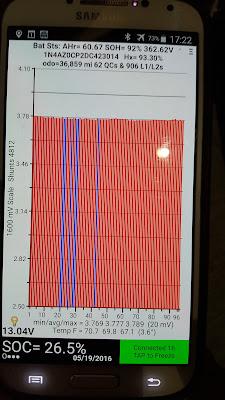 Which kinda got me thinking... Is my true pack condition based on a well balanced pack or should I go with the "normal" condition?  To be honest, I rarely have the opportunity to let the pack get out of balance but that might be changing soon.  I have just under 7 months left on the lease and just over 7,000 miles on the lease mileage which means the LEAF is going to see the inside of the garage a lot more in the near future.

Problem with that is it only takes a day or two of driving the Corolla for me to tire of gas and go back to the LEAF... first world problems, I guess.

SCE has announced they will be installing 1500 charging stations in their service area. The chargers will be concentrated on work places, condo's, and apartment complexes where the likelihood of home charging simply isn't.  I have always said the public utilities should be taking the lead on providing a public charging network.  Now SCE is only providing infrastructure management and support coupled with grants to defray installation costs.  A charging network provider will handle the billing. My suggestion says the PUDs should handle it all. Issue me a card or code or whatever and bill it to my home bill. But its a start, right?  Besides if all goes well, SCE wants to eventually install 30,000 plugs! Now would that not be cool!!

Finally, Tesla has finally admitted that free access to the SC network would not be happening with the T3. Not much of a surprise to me (since I predicted it a few months ago...) but hinted that the option is likely to be available at the right price. Pay per use was also mentioned although no price was revealed. My guess?  Elon is hoping for a gas price spike between now and launch day. :)
Posted by DaveinOlyWA at 12:50 PM