Why Dealer Loyalty Is More Important Than Brand Loyalty

I spent time in the car business working for 4 different car dealerships. Granted they were jobs that were more than 30 years apart but the one thing that was obvious is that there is a huge difference from one dealership to the next even if selling the same brand of car.  Now some dealerships are much more proactive about building a good name than others and they do it by having raffles, charity events,  autograph sessions with local sports heroes, etc.  Its all about getting their name in front of the customer's eyes and guess what? The brand of car really doesn't matter.

The great predominance of car purchases are emotional ones. Most shoppers go in with only a vague idea of what they want and what they are willing to pay for it. Car Salesmen know this and the average consumer walks away with a car they had no intention of buying that morning when they set out.  What happens is the salesman creates a relationship with the buyer and eventually the buyer makes the purchase to help out the salesman.  Now this isn't always how the deal works but if there is a question of 2 cars being nearly equal in price and condition, it is this reason that usually controls the decision to buy.

The EV community is different. In most cases, the buyer knows more about the car than the salesman so dealerships need to set themselves apart in different ways.  We don't care about sports star being there to sign autographs, what we care about is price, range and charging.

In 6 months, I will be in the market for my 3rd EV. Not sure what it will be or whether I will buy or lease.  One thing that seems certain and that is the best lease deals seem to come from Nissan but now that other manufacturers are offering more range, this maybe my "conversion" from leasing to buying.

As good as all that sounds, I am in a time crunch for several reasons. I have more than 7 months left on the lease but less than 7,000 lease miles which means a lot of gassing or a lot of overage charges. This gives the advantage to Nissan because right now they are offering $1000 loyalty cash or lease/purchase of a LEAF and will forgive up to 2 months of lease payments on your current lease. This means 7,000 miles in 5 months!...

Offers like that is usually in preparation of something that is about to happen which I am guessing means that their 2017 plans will be public within the next 3-4 months. So predicting even more range (Time for the 48 kwh battery?) and better pricing (larger pack on the S trim) which means waiting could be a huge benefit to me

There were people who literally stole 2015's on year end deals and I now have to struggle with whether I want to try to cope with 30 kwh on another 3 year lease?  But if the price is right and all that needs to happen is another range jump!

Despite all the noise from Chevy, Tesla, BMW and VW,  the LEAF still seems to be the best fit for me.  The Bolt is interesting but I have to say I would be surprised to see any significant deliveries in this area before mid 2017. As far as in time for my lease end?  Not a chance.  If I lived in California or Michigan, maybe but here?  Washington has been in the Chevy Doghouse for decades and I don't see that changing anytime soon.

Now to start my dealer selection.  This will be my 3rd LEAF and most likely my 3rd dealer.  Price is still the #1 consideration so anything is possible but one thing is for sure. If there is a tie, there will be a 3rd dealer.

Rairdon's Nissan has had at best a shaky reputation. My 2011 came from them and I paid an exorbitant fee for the car.  This resulted in the much questioned $10,000 downpayment I made to reduce my "rental" fee to somewhat normal levels.  As it stands, I "escaped" with my decision and in retrospect; could have parlayed it into a great deal if I had taken the offer to extend the lease longer since $162 a month payments was a "pretty good" price.  Granted; I have not kept up with what they have been doing lately but at the same time, I have not heard anything resembling their trying to be more EV friendly.

Olympia Nissan is where I got my 2013. There was actually a tie between them and another dealer but I chose them because I had had my 2011 serviced there and they had THE FIRST  24/7 fast charger which meant they had to change their policy of locking up the lot at night.  Before they had an L2 in the spot currently occupied by the fast charger and no, you could not charge after hours until they changed their policy.

But what was a great beginning has soured.  On Jan 11, I reported the fast charger was broken. It remains broken today. "Waiting on parts" is the official response... Not even going to comment on that.

I recently took my car in for some recall work.  An hour after I dropped it off, I got a call. On the multipoint inspection I was told that my rear tires were in the "near replacement" stage but my front tires were basically illegal.  2/32nds was the measurement and it was recommended that the tires be replaced immediately.  The first thought that came to mind "Why does he think I am an elderly female from Pasadena?"  and I politely declined the offer of $232 per tire.  This did make me wonder though if my experiment had gone too wrong.

My brother was the manager for the Les Schwabs in downtown Bremerton and always said if you want to be cheap (he knew me well) rotate your tires at a minimum of every 5,000 miles.  Front tires wear the fastest but at the same time you want your best tread on the back for Winter (assuming you did not take his first recommendation of snow tires!) to prevent oversteer.   So I thought; lets change the rotation to 10,000 miles just the one time and see what happens.  Before with the 5,000 mile rotation, I never had more than a 1/32nd variation in tread depth. I have to say my showing off in roundabouts probably was not the best idea...  Well the report said  2/32nds on the front,  5/32nds on the rears.  The only correct thing on the report was the differences in tread measurements. 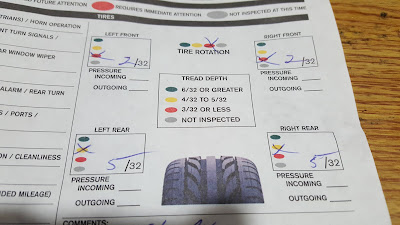 Either way, I had already decided I was not replacing tires before my lease turn in and I am sticking to that plan 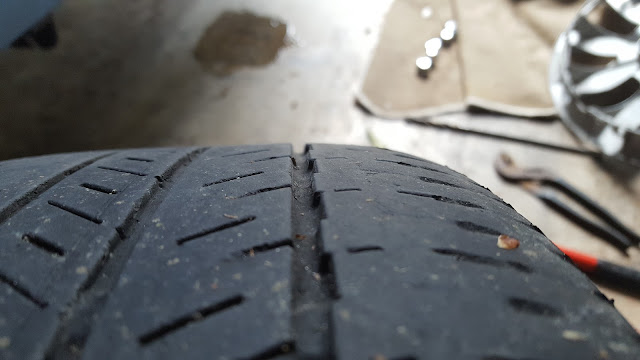 I did realize that getting a decent pix of tread depth is VERY tough. Notice the middle tread depth seems much shallower?  I actually made several measurements on both front tires and there was essentially little or no variation.

So I did the coin test on the middle tread 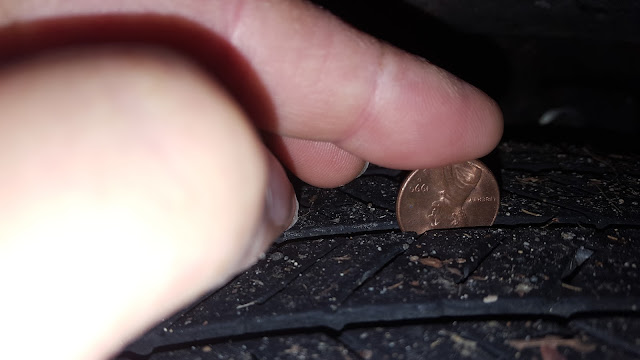 So if the report is correct, Lincoln needs to shave his head!

The back tires were better of course. 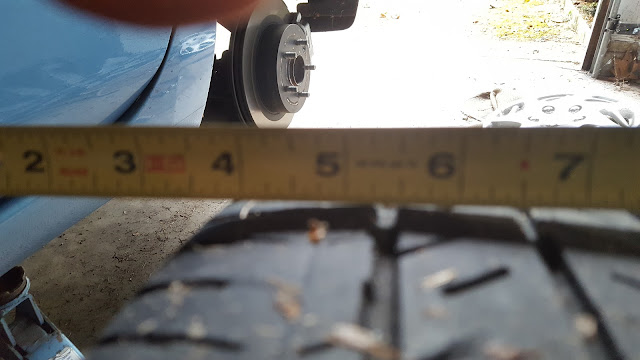 The tape measure was a lame attempt at providing some sort of scale...

I will be contacting 4-5 dealers by email by mid Fall.  I now feel that to get the best option, I will need to expand my radius to about 85 miles.

The service visit at Olympia Nissan is not the reason for the change.  In reality, the service advisor did his job to a T so have no complaints with that. This may come as a surprise but let me explain.

The service advisor did not do the inspection. They only read the inspection and then makes the determination on what recommendations to make to me.  First off; they will look at my history and notice I am not a frequent visitor.  Unlike some who bring their car in several times a year for very small issues, I don't.  In the 2½ years of my lease; this was my 2nd trip to the dealership, both for recall notices.  So the early recommendation for tire service is understandable. He realizes I don't want to be there so its very well possible that I would want to get everything done in one shot and on that ideology, he was right. He had no idea the tire measurements were way off.

Anyone who spends anytime on LEAF Facebook groups knows there is a huge divide covering the spectrum of dealer experiences. From the ease of getting in and out, great deals, etc.  It all matters but what matters most to me is the support I get from the dealer after the deal is done. This is what separates the good, the bad and the pretenders.  Public charging is still woefully inadequate for many areas of Puget Sound.  5 months for a repair??

There is a reason I waited until June 11, to write this. The service visit was just a side note really.  I do remember sitting at the dealership on the phone trying to get the station to work on Jan, 11. I remember being confident that the station would be fixed quickly. Now I wasn't expecting a few days, more like a week, maybe two at the most...

So I need to ask for help. Anyone who is familiar with the breakdowns that happen and what is the turnaround on a parts order? Because I think the delay has to do with simply providing the funds to get the station fixed. Who pays for the fix? The dealership or Nissan?