As always, taxes are a required part of our existence and as always people need to complain about them and the LEAF is not immune to that.  A lot of discussion over the "value" of the $150 EV tab renewal fee and whether or not its a "good deal" over simply buying gas is currently making the rounds.  One EVer wrote that they used their LEAF less than 1000 miles a year  and mused that gas would be a better deal.  I say that Uber is the better deal!

And that would be the typical knee jerk reaction but we live in Rainy WA so even something that is a mile away would translate into a very inconvenient chore (dropping kids off to school) during the loooong rainy season we have. I am ok with walking a mile during our glorious 2...no 3... , well actually its getting to be more like 4-5 months of good weather thanks to Global Climate Change!  In fact, I had a dinger on my LEAF which I took to the body shop to get fixed. It was 3.2 miles away and I walked that distance (normally I would have gone 4 miles or so at the gym anyway...) but both times it was during sunny days with temps ranging from mid 60's to low 70's.  IOW, perfect day to get out and suck up some exhaust!!

But back to EVer's "1000 miles on gas" is better statement.  Actually it really doesn't matter how far you drive in ANY kind of car because of two things. 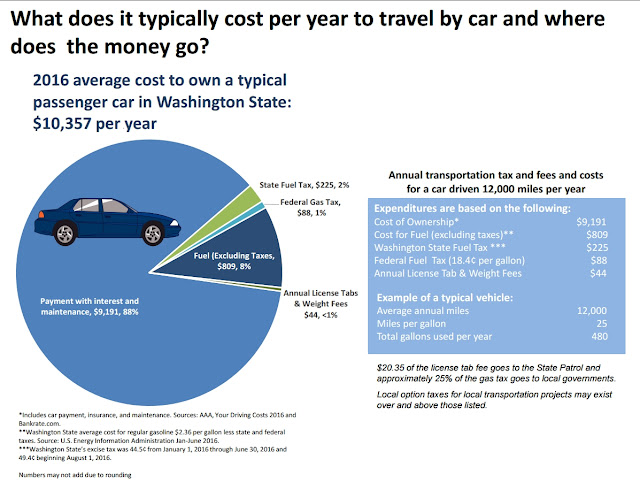 The biggest cost factor for any car is the cost of the car and insurance.  I have tracked every penny since Nov 2003 on several different types of car and fuel costs is one of the smallest cost. Yes, I drive the higher end of fuel efficient cars but even a gas hog would not put up a serious fight.  The issue here is generally, the higher gas consumption equals higher payments, insurance, etc... Not always true granted. You could always pick up a 20 year old truck on the cheap but that frequently introduces another expense high enough for major budgetary considerations if you know what I mean...

IOW; he would lose on any car simply because he did not drive it enough. Now the definition of "losing" is highly subjective (objectivity is the excuse we use but in truth, it rarely comes into play) and really depends on one's desire to get things done cheaply.  There are buses, taxi's car pools, etc.  Now children throw a BIG kink into the mix but there are a lot of people who don't have cars and have children. There is no secret that we tend to not want to walk "anywhere" including walking from the 3rd row of the parking lot. Saturday morning, I watched a car circle the two rows on either side of the front door at Costco's parking lot at least twice. (don't know how many laps they had completed before or after I saw them since they were still circling when I parked halfway down the next to the last, nearly abandoned row from the front door) In fact; if you want to completely eliminate ICEing overnight, simply locate the charging stations at least 3 rows back.  Now there is an argument that one does not want to be caught with their car too far from the building in case of heavy rain but couldn't help but notice the very same practice at covered lots like Bellevue Mall so...

But using the chart above, our EVer would be paying just under $10 a mile with fuel costs completely removed.  Uber is starting to look better and better.  Not even going to talk about the invaluable benefits of "10,000 steps a day"

He complained that the WA State gas tax (which he underestimated by quite a long shot) would allow him to gas it several thousand miles which was his first mistake because gas includes both state and federal taxes plus homage to the oil companies. The 3 parts can NEVER be separated so all 3 "have" to be taken into consideration. I think he simply forgot to consider that the $150 EV tab fee does cover the fed commitment to the highway fund.  Not all of this applies to EVs though. Fuel is frequently not a factor simply because its super cheap or free. Now this not the case everywhere but it IS the case in WA where the $150 EV Tab fee exists.  When is the last time you got free gas?... yeah, that's what I thought.

But if using math for fuel cost considerations only, and the cost of gas being $2.499 today (I checked several stations and this was the lowest I could find. Granted rewards from various sources will drop the cost a few cents but whatever...)   means a 30 mpg car will go  1800 miles so if the EVer's statement of 1000 miles a year is correct, on the surface, it would be cheaper to drive gas...

*30 mpg ain't happening unless the car has an EPA rating of around 50 mpg.  I had a Prius (lifetime average for all driving 53.9 MPG) that I tracked on trips likely farther than what the EVer above would be driving and in Winter using short trips under 3 miles. I averaged 24 mpg (Summer was higher at 36 mpg)  So lets take that $150 using a more realistic 20 mpg and now we are going 1200 miles which means, gas is still winning.  FYI; the 3 mile distance was selected because the strip mall on the corner from our house included several eateries, Safeway, Papa Murphy's, etc. was 2.4 miles away but you get the idea.

Note; the  Prius had a thermos which stored hot water from the radiator and was designed to warm up car quicker during multiple short trips with short stops between. This was supposed to help fuel economy. Most of the time the average "layover" was 10 minutes and that time seemed long enough to "put me back at square one" most of the time. In these cases, Summer was MUCH different.  For comparison; In Summer with car warmed up, I tended to average between 60-75 mpg on city streets with the wide range depending on traffic light timing.
AND...

Remember the oil story. My sister had a lady with a brand new Ford Taurus who had her oil changed at 6800 miles (interval is 10,000 miles or one year under normal conditions) more than TWO years after she bought the car. (despite the fact that her first 5 oil changes would be done for free) Luckily nothing really bad happened but the facts are, you are really pushing your luck if you don't get the oil and filter changed AT LEAST once a year and guess what? The more short trips you make, the more frequent your oil changes should occur NO MATTER HOW FAR YOU WENT... so if we take the super cheap route and and DIY'd it, You could probably do it for $25 filter and all.  ($150 tab fee - $25 oil change / $2.499 for gas leaving  smidgen over 50 gallons of gas) so now that $150 is only taking you 1000.4 miles.

Ok, I guess the EVer was right. It would be cheaper to do gas...

In this day and age, I almost never turn down a proposition to save some money. My income is likely a fraction of what most EVers make so it is more important for me to budget than for most. But this is not as cut and dried as we like to think. There is also the desire to have some fun while taking our ride on Planet Earth that needs to be balanced as well.

But a close examination of how we spend money and where we choose to "get the bargains"  has left me scratching my head.  I thought I was singularly unique in my over the top penny pinching ways while literally throwing money away at other things but have come to find out that I am actually pretty typical.

I will likely end the year receiving nearly $1000 in cash back from the various credit cards I carry. I have a dozen of them or so (I should really know this...) selected for the various cash back options. Since I haven't paid a penny in credit card interest in over 30 years, the number of cards is unimportant and they are all on auto debit so they really make having them convenient, right?

I also have two that have 5% specials that rotate every quarter.  On one, it covered restaurants and I undoubtedly went out more than I normally would because I was "saving" money. Well, we all know that is not how it works.

But because of this give and take relationship with money spent and perceived value, we always need to keep in mind that money put into the local coffers tend to raise everyone's status in life.  Long after my youngest is out of school, I will continue to support education because the alternative is higher crime, greater financial need for social programs, and an overall blight on my neighborhood that will eventually lower property values causing an exodus.  So yeah, that $150 EV tax is one of "the" best ways to spend your money.  Just like any perspective where your wallet covers 90% of your view, this is not always easy to understand. Add the slow grind of governmental gears (at least the ones that aren't circular...) and the results of your money may take years to understand. But remember this $150 tax was bumped by $50 for a reason and that reason just started.

In closing;  I always consider my purchases and how they align with my ideals and I gave up the "hardline" approach a long long time ago simply because I found it tended to close my mind to new ideas.  The Dollar Store and all its iterations was one I avoided because it was supporting China, undermining American Factory workers, etc... But soon I realized I could not help anyone if I was not able to help myself, so I caved. But I discovered that the Dollar Store is not all useless junk (I also peruse the "As seen on TV" aisle closely...) Something I got a few years back and it came in a 3 pack. I find it to be a prime example how compromise in one area can lead to much larger benefits in another. Now, will the legendary (and exaggerated) Plastic Island in the Pacific shrink because of my actions?  Probably not, but in this case, I would require proof to burst my bubble... 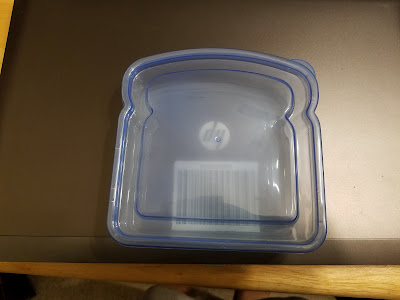 Tonia Buell reminds us that the entire $150 is spent to improve our state.  As we know, what we pay for gas does not.


Note; (Another way of saying "Closing part 2")  Our ability to justify our decisions ranks just above our ability to adapt and find a way to make it work.  In my personal life, there are a few events I celebrate because they are very important to me. The anniversary of one of those events will be next week. A triumph of the Human Spirit to go do the impossible never giving up. Never accepting "No" "Can't" "Too Late"

The LEAF is another much smaller way of making it work. Small sacrifices for a much bigger reward. The reward has only trickled in so far but the stream is growing every day so I leave you with an example of making it work. 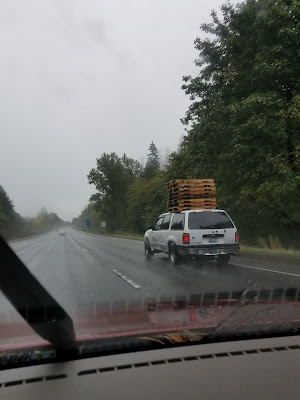 Posted by DaveinOlyWA at 6:19 AM