Ok, so my goal of reducing the LEAF usage as I near the end of my lease did not go as well as planned this month which means I have more lease time than lease mileage right now. Either way, it was just a somewhat busier month I guess cause both cars went over 1000 miles for the month.

The Corolla did go 1145 miles costing $70.95 or 6.26 cents per mile. I managed to average nearly 41 mpg, a very good number I think.  There was an oil change this month as well but to be fair since I don't count the LEAF maintenance costs (cause there is nothing to count) I won't count the gasser maintenance cost either. ($33.95 for anyone interested) 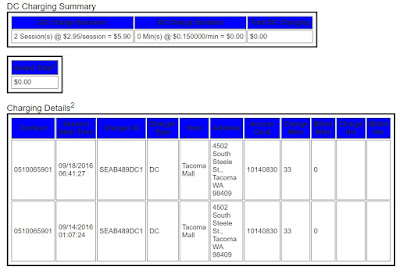 Strange...I can't decide if this is some sort of half baked attempt to show how much I saved or simply bad programming.  On the one hand, they show the connect fees I saved but did not show the per minute fees I saved. Since the station is preset to stop at 30 mins, not sure why 33 is showing but it should either all be there or none of it... Just strange...

Anyway, another great month in EVdom. National Drive Electric in Steilacoom was a success again expanding significantly in attendance this year. Some of the participants below

We had over 60 plug ins in attendance including a mail truck!  There has been a joke circulating that the Post Office went broke because Uncle Sam took away their gas card. Sounds like if they had gone EV, they would not have had that problem!... but nevertheless, it was a joke but the funniest jokes are funny because you can relate to them from real life experiences.

Also from Ray our "inside LEAF contact",  Looks like the S trim will have the 30 kwh option in 2017. Now if only we can get them on the streets in the next 12 weeks!

Car Sharing programs have exploded taking the "Uber" concept one step further.  They work by having dozens of cars strategically placed around town. You log into the app, do a search, find the car nearest you. Simply go there wave your magic wand (or smartphone) the car unlocks and you drive off.  Pretty cool, eh??

Well, in our myopic World, it was pretty cool until EVs were added to the mix then all of a sudden, we got upset that these cars were monopolizing public charging stations! Oh the inhumanity!! What nerve!  Then news came that one company currently using a fast charger in Seattle frequently (although they will let anyone cut in line to charge first and they do most of their charging at night) plans to add 100 EVs to its fleet. The additional charging need probably means that more fast chargers and prob L2's would be occupied by them!

Well complainers; get in line!  Before you complain about these private business cars taking up public resources, remember.

That will never happen just as complaining about someone using "public" charging facilities is never going to gather sympathizers. Sure it sucks that its late at night, you are short on charge and the station is the only one for several miles... but wait!

Maybe we need to understand that the quickest way to get more chargers is to demonstrate how inadequate our current network is.  Now you might say "that is exactly what we have been doing for 5 years now and its not working!"

Well that is not even remotely close to true. It is working. We have not seen a major deployment of new plugs quite yet but we have gained a lot of attention helped by the growing number of State legislators who are now driving EVs as well.

For anyone in WA, we know that any public transportation project takes massive amounts of money and time to implement. But public charging does not take that much. For the cost of a study to merely investigate a public transportation project, we could blanket the city with fast chargers. But all projects, big and small require money and support. We EVers are multiplying daily but our voice is not be directed in the direction that best addresses our needs.

Every time I frequent a business, I ask for a comment card or an online link to fill out a survey and every time I make it clear that I would think much more highly of the business if they supported public charging. When is the last time you did this?

Or would you rather sit in traffic complaining about the latest tax increase to cover mass transit? Think of where "that" has gotten us...
Posted by DaveinOlyWA at 7:17 AM