The Model Y Show; Just One More Hit Before I Go On!

Believe it or not, even I watched the Model Y reveal (my first Tesla reveal and most definitely my LAST time) knowing that this car will completely blow away any sales record the Model 3 would attain and I was not disappointed. 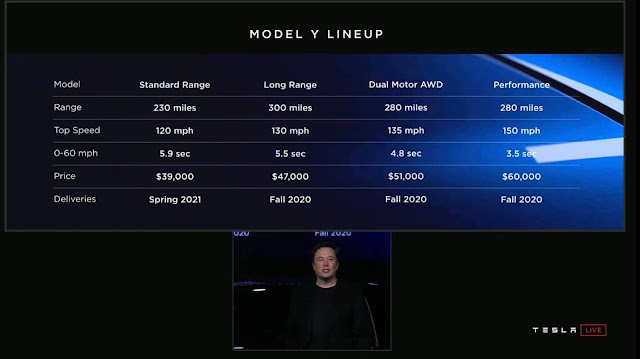 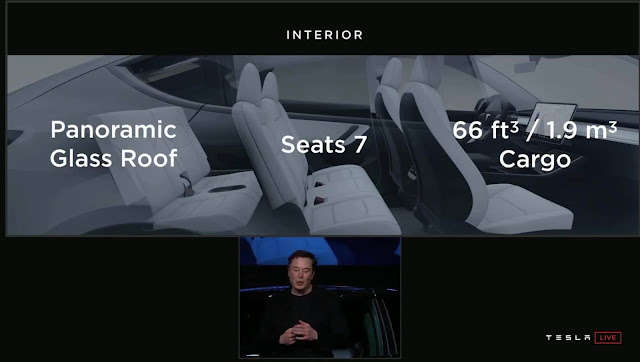 As always, options are limited and spendy. Unlike the Model 3, there seems to be only one interior trim as standard. Nothing mentioned on controls or lack thereof but guessing it will be near Model 3 in its presentation.  Hopefully a few more steering wheel controls will be added.

Its an family oriented SUV which is the most popular vehicle choice going right now. The option to add the 3rd row ensures the Model Y will be the most popular Tesla to date even outselling the Tesla Pickup (which was strangely not mentioned)   EV performance won't be lacking here either and efficiency will be good with a stated .23 coefficient of drag.   It will probably be a year or more before interior dimensions are mentioned but Tesla has always done well with leg room and I feel this will not be any different.  I will say that there have been a few mid size SUV's where leg room was less than desirable.

Yes the Model Y will show up well after incentives are gone so will it still be "affordable?"  If we configure the car to the average need; we have a LR AWD with 3rd row coming in at $54,000.  Expensive? Oh yeah but actually not bad considering the cost of other Mid size 7 passenger SUVs high end trim.  Cut the options down to the standard with 3rd row and now we have $42,000 which is right where most 7 passenger SUVs are now.

The seven seat option is huge but the information on cargo capacity is not specified so have to guess the 66 cubic feet is cargo minus the 3rd row.  All rows do fold flat (Nissan are you paying attention!) which ratchet ups the utility quite a bit. As seen below; quite a bit of space and functional as a 5 passenger with 3rd row folded. 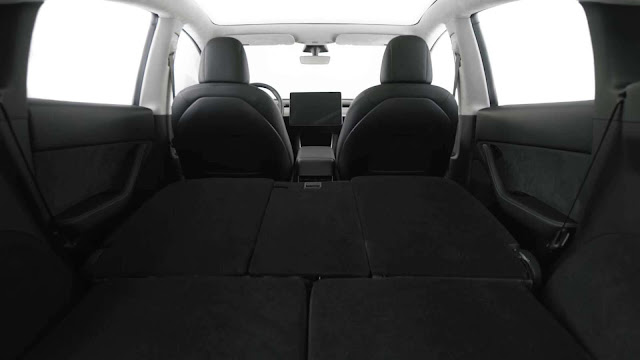 Best for last.  I have full confidence the Model Y will score very well on crash testing but the one reason I have never liked SUVs is rollover issues.  They simply roll too easily.  During my time as a road warrior, I witnessed two SUV rollovers caused not by hitting something or getting hit. They rolled simply due to a sudden maneuver.   Afraid that is just too close to "living on the edge" for me but the EV and its heavy low slung battery pack makes the risk negligible; a big plus for me.

As always, Youtube is beginning to flood with Model Y drives, etc.  This one illustrates how stable the Model Y is due to that heavy pack.

As always the reveal means that we have a long wait ahead of us.  Musk mentioned that the Tesla Model P  (Pickup) would be "available" THIS year  so a bit of a shock that there was no mention at the reveal but I guess this year is still young and plenty of time to schedule another reveal.

Tesla is  great company and wouldn't be anywhere without Musk's brilliance but I think its time for Tesla to find another spokesperson.  Musk's rambling oratory was extremely painful to endure and it will be the last time I waste my time.  I will wait until after the fact and simply watch one of the dozen highlight videos instead.

The one thing I was happy to see was the Tesla Semi dubbed the... uhh "S?"  for Semi...no, that's taken. Maybe "T" for Tractor... no Ford will nix that... So I am thinking the Model H (for hauler) but electrifying the last mile of the freight business will become Tesla's biggest contribution to society and I think, their best chance for long term financial security.

Either way, its interesting that the Model P which is by all accounts, imminent and will also have a rather brisk demand although nowhere near the popularity of the Y; but still not configurable but the Y nearly 2 years off (or more) can be ordered today.

But ordering the Y means no priority and a $2500 deposit.  Beginning to sound more like a "fund me" ploy.  Now it would take 400,000 pocketbooks to cover Tesla's recent loan payment but the Model Y will bring in a whole new group of buyers that may not be familiar with the Model 3 reservation process so it might just work.

Posted by DaveinOlyWA at 9:58 AM