Ok, so I skipped a month. I didn't post a January report but only because my battery stats weren't changing and I was waiting on that. Soon February was half over so... anyway, here is February and I hope you all realize I was quite rushed since this is the shortest month.

So I drove 696 miles with no public charging costing me 2.32 cents per mile.

Now, that was a rush!  To be fair, I did actually purposefully stay away from the QC stations for 6 plus weeks which hasn't happened since year 2 of LEAF #1 (because there really weren't any fast chargers around...)

But LEAFing really did take a backseat soooo....

Well, color me surprised on the one hand but not on the other.  With Electrify America coming on like gangbusters courtesy of the American Government, I expected EVGO to do whatever it could to maintain a competitive advantage in the public charging space but its price increase along with no timeline for increasing the speeds of its fast chargers has them nearly as expensive as EA when considering the faster charging speeds. EVGO does have one big advantage and that is equal CCS/Chademo access.   This means I will always choose EVGO if both are equal options simply because my odds of finding an available charger is simply that much higher.  Now EVGO does have faster chargers but they aren't here and there is no timeline for when they will arrive.

Which brings me to EA and their charging area design.  Yes, they continue to build for "their" cars (VW for anyone who doesn't understand "in your face" clues) while grudgingly putting in token Chademo stations running at 50 KW that I predict will be upgraded last (if ever) making EA's per minute plan prohibitively expensive for all but Teslas and the Kia Soul which charges quite well up to 80% SOC.  FYI; they also don't provide any extra parking spaces for queuing which means if you get there and all the charging spaces are full (notice I didn't say "all the chargers were in use") then you have to wait until someone moves their car.  No doubt someone at EA OD'd on the SIM plan (stupid, idiot, moron)

Its here and hopefully that is a good thing.  On March 1st, Tesla had to make a payment on a loan of nearly one billion dollars which put a serious hurt on their plans for expansion and ramp up for the soon to be announced Model Y. (look for the announcement next week)

I said it long ago that Tesla should have stayed in the high end market. I think the Model 3 has hurt the company and I hope they survive as they have a lot to offer especially with their Semi's which is where I think Tesla should have concentrated on. There is nearly no limit to the money that can be made and truth be told; don't be surprised to see many cities tightening the screws on diesels belching in their city when a emission free Tesla is all you need to get your goods.

BUT, then again, the Cheap T3 is here and still a cool car so... for more, you will have to wait on my TCO analysis between the LEAF Plus and the T3 standard  standard range Plus... It will be the "Battle of the +'s!"

They're up!... They're its down...  Kandi Technologies made a splash when it announced it was approved to sell some of its EVs in the US and will be based in Texas eventually building their cars in the US (Take that Little T!) Well, that is the up.  NIO Technologies, another Chinese EV manufacturer approved to sell EVs in the US recently announced they would not be building their own factory and will continue with a 3rd party vendor to build their cars. But their contract with that vendor looks to be prohibitively expensive and looks to be continued.

This is a HUGE blow to their US expansion plans and puts into serious doubt that they can even survive the Chinese market. They must have a lot more cash stuffed in the mattress than anyone else is aware of...

Its official!! We don't buy enough LEAFs to matter!  As we all know RapidGate is something we only see when time is the most critical and that is during vacations, 3 day weekends and single day excursions.   On paper, we should be able to do 400 miles in a day without too much of a problem but that is not happening... UNLESS YOU LIVE IN EUROPE!

Its seems that Nissan saw fit to release a software update to the EU that greatly eases the slowdown we see fast charging when the batteries start to see about 90º F.   Now, if you recall, "IceGate" testing loosely verifies that the best charge times (both max starting current and highest knee) happens when pack has a starting temperature around 80-85º F.  What that means is the first charge session for most in MODERATE CLIMATES will start at 120ish amps (for 50 KW chargers, 100 for 40 KW Chargers, etc.) and charge at that rate until roughly 63-65% SOC when the current will start to drop.  That is the best we can hope for.

Subsequent charges will likely have a pack warmer than 90º which means the starting charge will be less than the max current the station can provide no matter what the starting SOC is.  My NCTC 30 min charge at at 50 KW station netted me 21% SOC. You can see the horror below.  Yes, the pack was "warm" but... 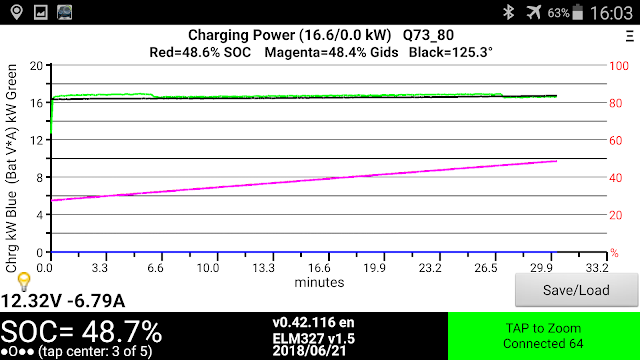 On the flipside, if the pack is too cold, it still starts at full speed (although that might not be true in super cold weather that we don't see here) Below with pack cold but only in the upper 40's and we see the knee moving to 46% SOC when it would normally be closer to 63%.  So slow in Summer, slow in Winter but still great as a local commuter. 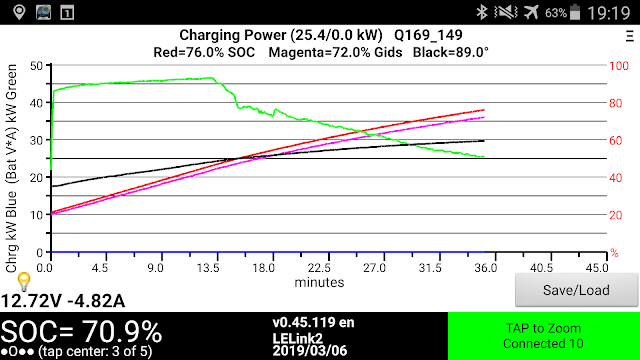 So why does Nissan agree that RapidGate throttling was a bit too extreme in Europe but not in the US?  15X greater sales volume in Europe is why.

In reality, I am only posting the above as part of my continuing critique of Nissan's poorly designed BMS. Did you realize that it needs to test charger speed before it decides what to charge at? Does that make sense? Should it not have determined the max rate before you plug in?  Here below is a charge I started with the SOC above the predicted knee which in this case should have been in the low 50% SOC.  Look at the curve which doesn't start it downward trend until above 65% SOC.  I don't know. Maybe that is how they all work so that makes it right?  No wonder fake news is so popular. 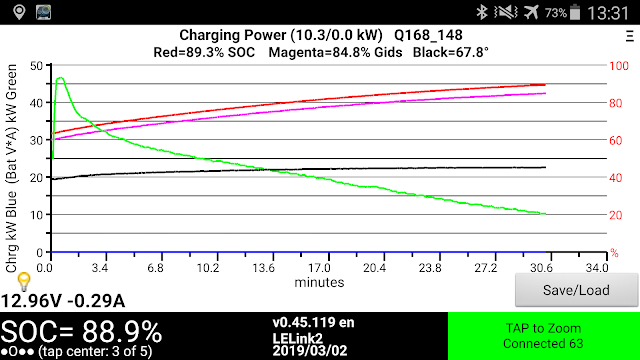 The heat is on with Comey confessions, Democrats pushing for public tax returns, and China's refusal to play games.  But on the homefront, Little T has insisted on relaxing restrictions for drilling (he does not shoulder all the blame...) deconstructing the EPA, and general overall douchebaggyness.

Despite all that, the main beef I have is his claims his main concern is preserving American jobs but he is allowing Tesla and Chevy to fail. Well, Chevy won't fail because they never abandoned gas but Tesla is in a different boat and its sinking.  Right now he is just lucky that the Koreans and Germans are still trying to find the door otherwise Both Chevy and Tesla would be battling a huge opponent AKA unsubsidized MSRP.

But the Koreans won't be held down long and the Germans are coming and they will come to a table already set for success which means we need to start moving on fixing the EV tax credit. It is broken and we knew it would be broken but Oil Money blinded legislators to the reality that we EVers are NOT GOING BACK NO MATTER WHAT!

So restore our choices. Give us EVs on a level playing field!