Ok, so that long hot Summer is over and now the Mercury is dropping along with the LEAF range making public charging stops more likely than not.  With my light driving needs,  I have noticed a dramatic change in my LEAF's fast charge profile and its all about... You guessed it! Battery temperature again!

During the Summer, "RapidGate" was part of any trip planning. How to keep the pack temps low to ensure a reasonable fast charge speed during the trip.  There are really few options since normal driving was enough to raise temperatures during the warmer Summer days so it all became a question of which charge would be the one to shoot the battery temps beyond 110º F hoping that would be the last charge of the day allowing an overnight cool down.

Now, I noticed all this during our typical Fall weather which generally sees lows in the 40's, highs in the 50's.  Battery temps were in the mid to upper 50's.   But as luck would have it, we got a cold snap and a high pressure system parked over the Puget Sound region which means sunny days and COLD nights.  With temperatures plunging into the mid 20's, I felt this would be a good opportunity to see how far the knee moves.  It would also be nice to attempt a 3 TB reading as well!

To create a level playing field, I chose only DCFCs that will charge at least 122 Amps and they are not all created equal! The starting data is easy enough but I designated the "knee" when amperage drops below the max amperage for the machine at least 2 consecutive readings (This is not rocket science. The knee is VERY obvious) .  As always, the numbers fluctuate quite a bit so 124 amps is normal. Realize with a 50 KW charger, the theoretical max on a 400 volt pack is 125 amps. 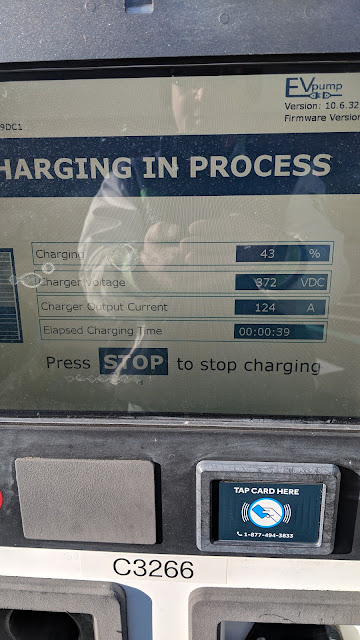 Created equally??  The station I picked at Tacoma Mall
simply because I know better. 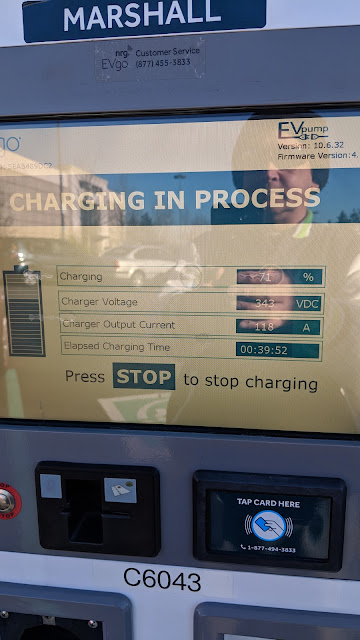 A Tesla Model X who didn't. They got there first and selected
the "runt of the litter" (this station also happens to be the
closest to the Mall. Things we do to save 4...no, 3 steps!)

And yes, the 30 kwh LEAF was hampered by the cold (Notice I used the slow charger?
This was before they added the 3rd DCFC so selection was not nearly as good back then!)
But this slowdown I was ok with!

Below is a "worst to first" list of charge sessions. I bolded the key points of each observation which would be starting battery temperatures and the SOC of the knee.  The temperature of the charger does not appear to affect the speed of the charger. At least on OAT into the mid 20's.

Now, all is not lost.  You can still get a good charge! It just won't be the first one. This can be an advantage. If you are like me, the need for stops on a road trip tend to be earlier in the trip. In my case, its due to my loading up on coffee in the morning along with taking a full cup on the road with me. This almost always means my first stop is required within the first 60 minutes.  For those without home charging, this can also work out especially if you have enough charge to get at least an hour down the road.    (Easy with 40 kwh!)

Now we all know the battery temps rise just from normal driving. Maybe its the higher regen profile of E-Pedal that is responsible? Either way, I decided to see if this is true when its REALLY (well for this area anyway) cold! On the three 12/6 charges, I drove from Lacey to Tacoma to Centralia to Tumwater.  It was Sunny and cold with OAT running 37-42º and I noticed that the battery temps rose steadily as it always does when on the freeway doing 65 mph but it seemingly hit a wall at 69-70º. This is good! 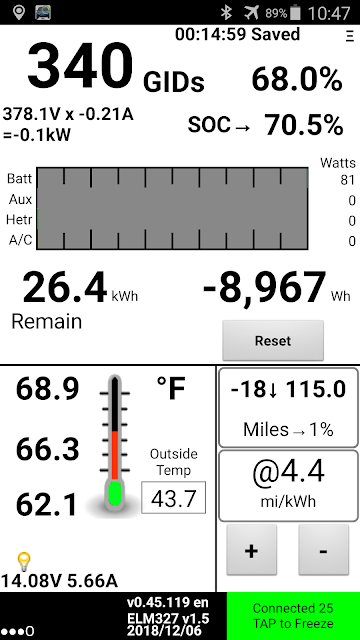 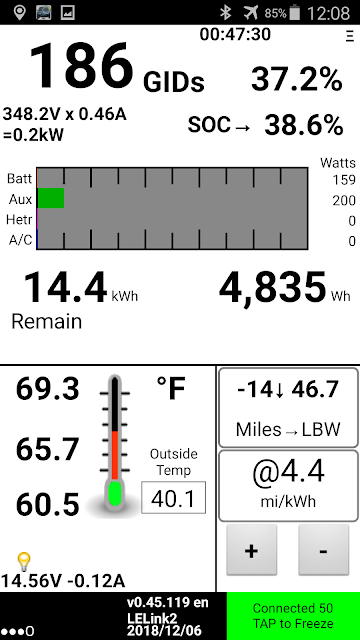 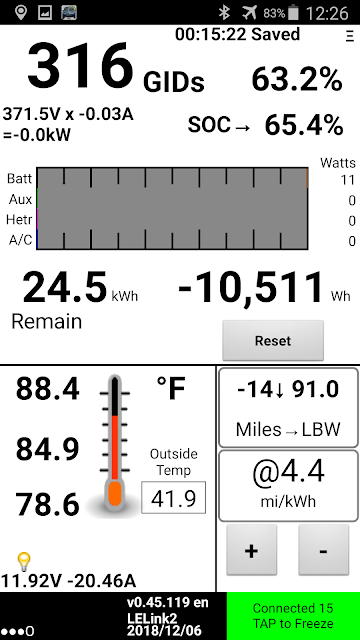 Depart Centralia.  Drive to Tumwater 65-70 mph. Heat use reduced
since its now so warm! Distance 23 miles 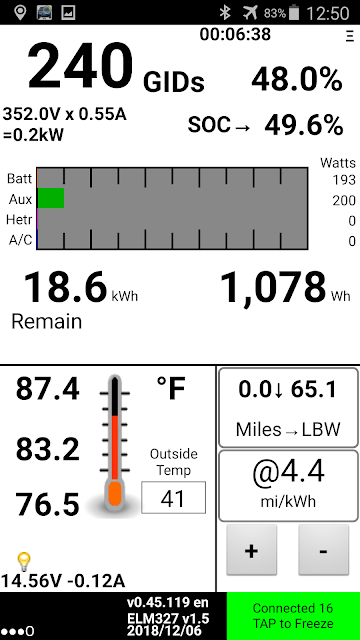 Arrive Tumwater. Batt temps down! Have to admit, my SOC
was a bit higher than I needed it to be so I drove a bit "less
efficiently"

All the charge sessions lined up pretty well except the first 12/6 charge at Tacoma Mall. On retrospect, I should have used a different location. It was one of the two EVGO sessions used. (Nov 22)  Notice the batt temps lower than the Nov 23 charge but a significantly higher knee?   The differences include;

OAT; Most of the others (despite low battery temperatures) were drives down with temps ranging from low 50's to low 60's. The only exception was 12/5 when it was 35º.  Tacoma Mall drive ranged from 22º in Lacey to 35º in Tacoma 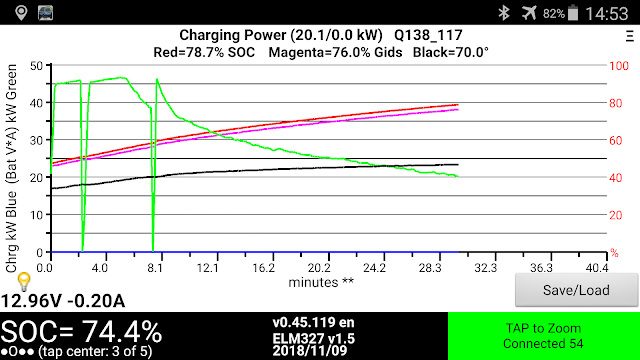 Now this charge graph looks confusing but what happened is I started a charge and knee kicked in at 50% SOC which was a shocker. It is rare that I sit with car while charging but this was one of those times. I unplugged immediately suspecting cold pack and restarted it but batteries were only in low 60's so figured not warm enough so I let it run until batts got to low 70's and unplugged again. As you can see, on restart, the charge hit full speed for about...5 seconds and plunged immediately. This basically kept the pack from warming up at all.  I now realized my starting and stopping the charge made it worse (not to mention the 3 minute wind up time for Webasto stations!)  essentially resulting is a "Reverse RapidGate"

Should be obvious here.  FYI; Probably not an accident, but for LEAF Spyless LEAFers, The sweet spot is dead center on the TB screen, 6 segments.   Obviously there are holes in the data but the cold is almost done and other opps to do this will come eventually but will have to wait. There are still a lot of holes to fill. Then we can chart!

So is "87 Heaven?"  Well, maybe. 87º still allowed the max amperage on a charge and as we know, that is very close to the point we see RapidGate kicking in.  Maybe its different in Winter? Maybe Nissan considers OAT in their algorithm?  Maybe the key is examining the spread of the 3 temperatures?

Eco mode allows a moderation of pedal input designed to reduce motor response so you can drive more "smoothly."  Its like mouse settings on your computer where your mouse has to move a certain number of pixels before there is any movement on the screen.  Obviously for game players, this should be very small but for the rest of us, a bit of "dead zone" is what we generally prefer.

But Eco also lowers power output to climate controls as well but if looking to boost range in Winter there is also another thing to consider and that is fan speed.  Below is two LEAF Spy screenshots taken a few mins apart.  Each shows the "settled" power usage of heat with fan speed of 2 and a fan speed of 5. As you can see, there is quite the difference. 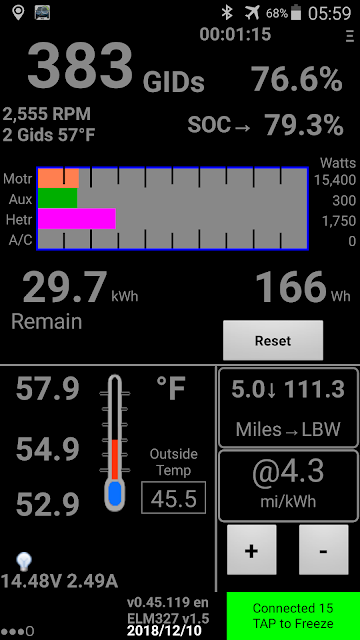 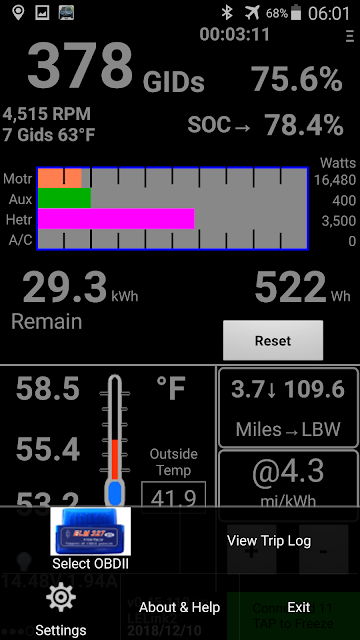 Some background. I left my house at 5:50 AM so wanted to "equalize" power a bit to eliminate the very high power output that happens initially.  Fan speed 2 usually starts at 2500 watts but drops down quickly to 2000 dropping again to the 1750 you see within 3-4 mins.  Depending on OAT, it could stay at 1750 for entire duration of trip (11.8 miles and 16-20 mins) but have seen it drop to as low as 1250 on those super mild days.  For some reason it takes what I consider to be an inordinately long time for OAT temp to settle. As you can see, there is quite the difference.  Based on weather station reports (not official national weather mind you) in the area, temps ranged from 39 to 41º