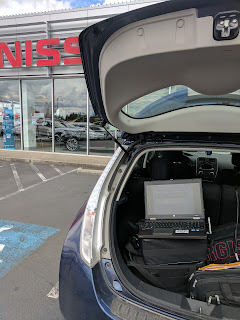 Its BBQ Time (For the Battery!)

The heat is on!  According to local news, this is the first Memorial Day Weekend to have at least 2 "mostly" dry days in over 20 years.  But we haven't had a drop of rain in the week preceding the holiday and if the forecast holds up, we won't see any for at least a week afterwards.  IOW, we are already seeing "Middle of August" (mostly because early July can be wetter than we want...) Weather!

But there is always two sides to any good thing and unfortunately that means its also "Battery Degradation" Season here in the Pacific Northwest.  Now, don't get me wrong, its nothing severe like Cali or other places south.  In fact we have a WA LEAFer who posted a pix of his 2013 LEAF @ 90,000 miles with all 12 bars intact musing whether his OEM tires will make to 100,000 miles. 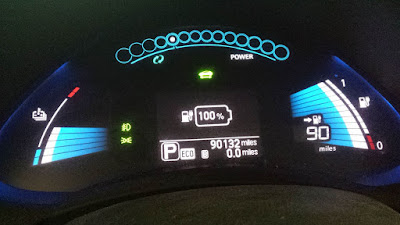 His recipe? A lot of "easy highway miles" (well, that is a bit understated!) and charging from very empty to full when he gets home on L2.  But with the weather we have been having lately, I am almost as impressed he only has 5 temperature bars.

Any way, as you might guess the great weather we are having calls for an experiment! (As if you didn't already know this was coming.... :) ) Many 30 kwh LEAFers are seeing degradation already, some significant and all appear to have either gotten cars that spent at least a few months on the car lot or live in hot climates.  Then comes my LEAF which after 6 months and 13,000 miles, my battery stats are EXACTLY the same as the day I picked the car up on 11/11.  But I got the 2016 S Trim with 30 kwh battery; A car that was only made a few months. It probably spent less than one week on the lot.  That is one thing.

Now the other; hot weather? Well, I can't change the weather so its being cooperative for experimental purposes is awesome! But I could also help my case by simply creating the hotness with fast charging which is what I have been doing.

Now previously I reported that initial observations has the 30 kwh pack cooling off much quicker than the 24 kwh pack. Now before we think that larger pack means quicker heat dissipation due to lesser pack cycling, be reminded I am on pace to hit 25,000 miles in my first year which means I am just as close to the bottom of the pack as I ever was!

Also the change in fast charge profile has created a lot more heat.  In fact, fast charging has become so efficient that I generally disconnect when the charge rate drops below 40 KW because I have enough to go where I need to go! 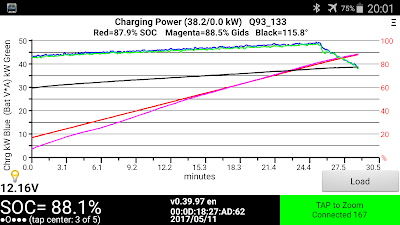 But again, there is a trade off. This kind of power transfer cooks the pack!  So I was seeing temperatures well exceeding anything I had seen on my 24 kwh packs. The biggest reason was because the 24 kwh packs slowed the charge rate so quickly that I generally charged only till the rate dropped below 15-20 KW but was barely seeing 65% SOC!

But I also noticed that unlike my 24 kwh packs, heat dissipation was much faster.  Before a 2 fast charge day would take 24-36 hours to normalize even during cool weather but I was seeing this after less than 12 hours Pretty obvious that there is a big improvement in chemistry or something else. Well we all know that there is no active cooling added.  So is it all passive cooling?  I mentioned earlier that the 30 kwh packs (or at least later versions) were built with more space between the modules.  This would allow more air to circulate and help dissipate heat. Then Brent from Portland mentioned that he was seeing more heat buildup when he blocked his front grill and deduced that Nissan may have put in venting to the pack.  This all seems to correlate to what I am seeing.

First off, the LEAF has 3 temperature sensors and generally they run hottest to coldest with the first two being fairly close to each other while the 3rd one is somewhat cooler. A 4-8º temperature spread is common. 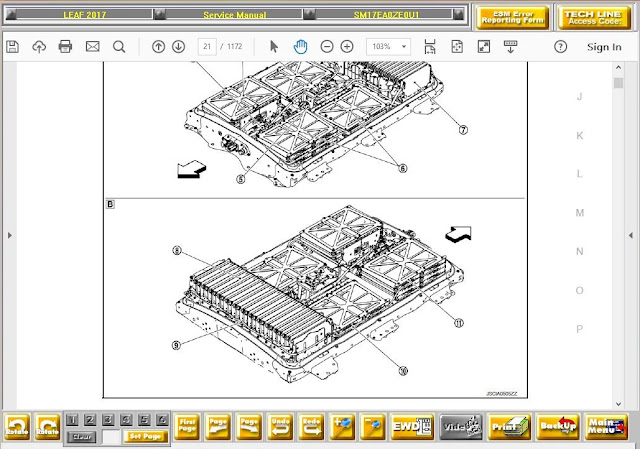 If there was some sort of ventilation tunnel, movement should provide noticeable cooling.  Now this could also mean cooling was happening without the venting due to the additional spacing between the cells so first to check;  What does the temps look like when its 84º in the middle of a shadeless parking lot?   So the experiment;  Get a cold day, a hot day, lots of fast charging, parking and driving and see what happens, right!

Ok, first the hot day (since it happened yesterday, its also fresher in my mind) Naturally we want to start with a full charge and verify our level of degradation... :) 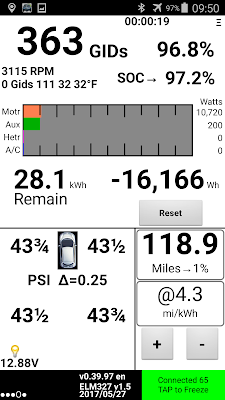 Hmmm??  Tire pressures a bit lower than I like. I guess it will have to do.

So the early drive is fairly uneventful. The plan is to stop at roughly 105 miles to grab a quick boost from the L2 Station at Little Creek Casino.  It is unshaded and I will likely need it to get to Tumwater anyway.  The day quickly warms up and with full Sun, the 84º air temperature basically means nothing.  Below illustrates the benefits of parking in the shade whenever possible!  Anyway I had a bit more range than predicted but had to upload work and Little Creek has BLAZING Wifi and grab some refreshments so stop it was! 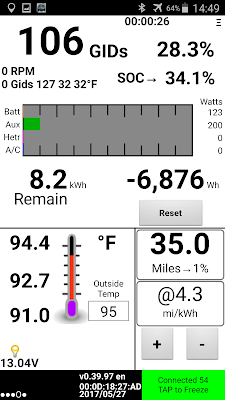 After 25 minutes of charging on L2 in full Sun.

I kinda blew this one. The bottom two temps went up while the hottest one went down a few 10ths. Should have done a before and after pix.  Anyway,  leaving Little Creek and heading for some real heat. But after driving 108.3 miles before the boost, I am realizing that the temperature difference I had hoped to see was there but just barely.  No more than a 8º spread which is pretty common even while moving which tells me that cooling with hot air doesn't work well! But again, solar radiation is the main player here. With air temps in the mid 80's, its more like the mid 90's and higher on the roads.

To illustrate, lets go back to another Sunny day when temperatures were "area appropriate" 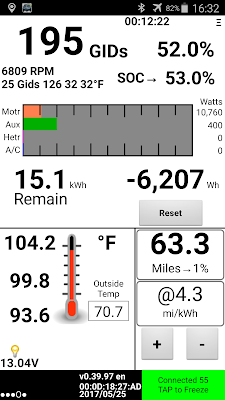 The above was after driving 50 miles after a quick charge that heated the pack to 116º on the top end. As we can see, the range is much greater.   Notice the spread from #1 and #2 is growing as well?

To illustrate even further; What happens when the temps in the battery are high but the air temperature is much lower? 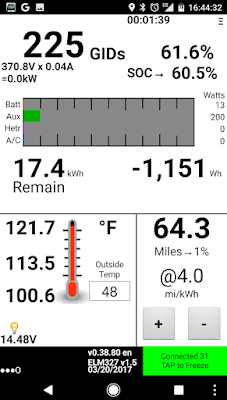 The above pix you might recognize from my 300 mile trip which had several QCs although most were shallow but I found that 122º was about as hot as it was going to get in rainy mid 40's WA weather. I was beginning to think 9 TBs was as high as it goes.  I don't have those issues any more.  I have seen 10 TBs 3 days in a row now peaking at 126.4º   In my previous LEAFs, I hit 8 TBs one time and it only stayed on about 10 minutes and I was SUPER concerned about it. I wanted to rush home, jack up the car and set some sprinklers under the car but now?  Ah, never seen red yet so I am good!

If we refer back to the locations of the temperature sensors, we might notice that # 9 is in a position where it would be somewhat protected from outside air influences since its more forward and higher which means if passive only cooling was in place, it would receive the least because its farthest from the edge of the case making it the likely #1 sensor in LEAF Spy and the hottest.  Sensors 10 and 11 on the diagram would be closer to the edge of the case and more apt to see outside air cooling effects.  On the flipside, sensors 10 and 11 would receive more radiant heat when parked on hot asphalt.

But if there was a vent from the front of the car as Brent suggests and the air was coming in cool and warming up as it traveled to the back of the pack before venting out, it would make sense that without say an exhaust fan to create negative pressure, the back part of the pack would cool much slower.

But alas, the diagram above does not indicate such a channel for air flow exists.  But, if there was...
Posted by DaveinOlyWA at 4:58 PM No comments: