The debate over purchase/lease has ratcheted up a notch or two recently.  Nissan has been slashing lease rates on the 2016's to (hopefully) clear space on dealer lots for a soon to arrive longer range 2017 LEAF.

A rumor started in France predicts a 40 kwh LEAF hitting the streets in the next few months has me literally jumping out of my skin. The anticipation is unpalatable and  complicated by the usual "no word, no hints, no confirmation" Nissan stance on future models upgrades for its flagship EV.

Now before all this,  my plan was pretty clear cut. I would simply lease the best EV option out there when my current lease on my 2013 LEAF S expired Dec, 20 of this year. I figured the likely option would be a Nissan LEAF because they still give the best discounts on leases which includes the entire fed tax discounted immediately. I was willing to extend my lease up to 6 months on word of a better option like the 40 kwh LEAF if it was just around the corner but it would have to be a MUCH better option because....

I would have to get new tires. I planned to have just enough tread on my original OEM tires to pass inspection when I turned in my LEAF and that plan is right on schedule. With barely more than 3,000 miles on the lease, I can say with confidence, I might have a few thousand miles of tread to spare but not much more than that meaning more than a 2-3 month wait would require tires.

I would also have to renew my vehicle tabs at just under $300 a year ($225ish for the car, the rest is park pass, Seahawk custom plates. IOW; required driving utensils :) )

But my plan did not include a fire sale that would make California's wildfire season seem like an under-powered weenie roast.

First off; I received some snail mail a month or so ago offering to sell me my current LEAF for $5800! AND waive up to 6 months lease payments if I acted right away.  Well, you know the adage "If its too good to be true, it probably isn't?"  After all, my residual was $12,192.

Well that was my first, last and only thought on the subject and it immediately went into the garbage. So naturally I went on line to chide Nissan for sending me such an obviously transparent sales tool designed to get me in front of a salesman who would pressure me into something I didn't want at a price I didn't want to pay.

I was immediately inundated by other LEAFers who got the same offer INCLUDING one who had decided to buy and did everything thru email including the final quote who ALSO had a 2013 S on lease and he got his for just over $6,000!

Another with an SV purchased his lease for $8100!  I began to realize that the "too good to be true" offer was in fact, REAL!

All of a sudden, I have many other options to consider.  At $5800, the LEAF was just about cheap enough to purchase, use it for shorter trips AND still be able to lease another LEAF! The range (just like my 2011) was very useful until I hit the 40,000 mile mark and now its going to be a struggle. Right now in Summer, I am good. Just did 90.4 miles on Monday with A/C but this car used to do over 100 miles which means Winter will take another group of destinations out of reach without a public charging stop.

Another EV'er who wanted to end his lease early on the EV, stumbled across and pulled the trigger on a 2016 SV with the 30 kwh battery and got a GREAT deal with $1,000 down and $270 a month!

This would likely mean I could lease an SV with 30 kwh for the same as what my current 2013 S is at $245.75 a month because EVs are not taxed in WA! Even if it was the same deal, it would still be significant and the reason??

My 2013 S is a perfect example of obsolescence. After 3 years, the lease residual is ridiculously high to the state of rapid improvement in batteries leading to much more desirable EVs.  No one would pay $12,000 on a used entry level LEAF that had 45,000 miles on it so hence the "half off" sale.

Another LEAFer received an offer in the mail for a 2016 S for $199 a month after a few thousand down which is really only an average price but the residual is a MUCH more reasonable at $8361.

Suddenly its beginning to make more sense to lease a 2016 SV.  The 30 kwh range opens up Grays Harbor for me (since public charging there does not seem to be happening any time soon) and in 3 years, I should be able to negotiate a better buy out the likely residual they are going to be offering!

This means I make out on the lease, make out on the purchase! Better than the doubling down I will be doing at Muckleshoot Casino in about 3 hours on my way to the Journey Concert tonight!

Brian Henderson (also a LEAF Advisory Board Member) sent me this.

David, one more option to add to your EV decision confusion … as I feel your pat is missing a section!http://daveinolywa.blogspot.com/2016/08/nissan-leaf-leasing-aka-double-dealing.html?m=1FYI: a Soul EV. Right now offering leases with $13,000 (includes $7500 fed) incentives +$2-3000 dealer incentives. ie: a lease sub-$199. Know a couple owners at sub-$189/mo. While the monthly is lower tha Nissan, by default Kia quotes 10,000 annual miles vs. 12,000. (online calculators at each web make direct comparisons between LEAF SV/SL & Soul EV base/+). Kia's current base promotion is $169/mo (36 mo) with $199 down (ie: same as $224/mo avg with zero down)On the use LEAF side, there's Paramont NW in Seattle and Platt in Portland. Both offer 40-60 used EVs at great prices. Seeing a number of lease returned 2013 LEAF's at ~$9000 range. Not sure how compares to you doing a buyout? Another option is to trade in your 2013 S and upgrade to a 2013/2015 SV/SL for the price difference. Advantage may be finding a more healthy (SOH) than you have at low mileage. A number of lease returns only have 12-18,000 miles!Just a little something to consider as you enjoy your long weekend. 😉Cheers, ++Brian


Thanks Brian for the heads up!
Posted by DaveinOlyWA at 10:07 AM 10 comments:

Despite a 4.9 cent per gallon increase in WA's gas tax on July 1st, gas prices went down!  Obviously the tax increase was not enough. And public charging is still struggling to find the money to grow. Something is real wrong here!

As you might guess; a combination of local work, reducing mileage on the LEAF and days off pushed my pack numbers (GIDs/ kwh available/ ahr/Hx) to new yearly lows of  19.5/251/57.82/87.27. Most of the drop happened over a 2½ week period where I only had 2 complete charges so the drop was more than expected.  As we moved into the early days of August, I had planned days off that increased my LEAFing which also caused a bit of rebound in my numbers to 251/20.1/59.78/91.39 soooo looks like the going away party for bar 12 will need to be postponed again!

August saw some other milestones when on the 2nd 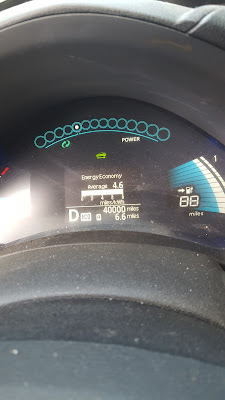 Now my LEAF kinda knows what I felt like when I turned 50... But in reality; she doesn't.  A good indication of your pack "can be" when you drop your first bar.  I reset trip A and Miles/kwh daily and as you can see, 6.6 miles down the road with 12 bars still so she is still pretty healthy!

In other news; if you have not already done so you should and that is register for the WSDOT Hybrid Vehicle and Alternative Fuel Report.  It's a quick summary on the various doing in the mostly (thankfully) EV World.  Written by Thomas L. R. Smith. PhD;, he has a easy to read writing style that is both entertaining and informative.  The latest entry is here.  Its published twice a month (unless they take a trip to Europe or other things) and you can see back articles here .

An example of the simple truth he writes...

"There are no alternatives"  well, gotta say HE NAILED IT!   Actually its his way of saying nothing of note happened during the two week period the newsletter covers. Hopefully this trend will continue!

I added the rest so our  FB Seattle LEAF owner Mod, Casey  could see that despite flipping coasts, he still has options!

And finally; (was hoping this would be a July story but.... Nissan of Fife is making progress on getting their fast charger on line. Hopefully not too much longer. 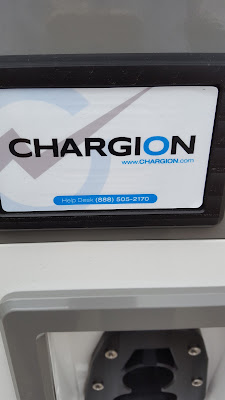 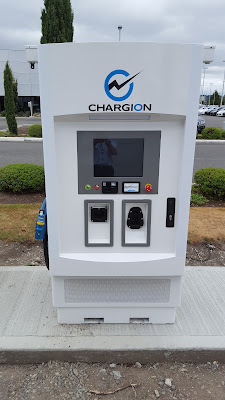 Posted by DaveinOlyWA at 9:49 AM 4 comments: