First full month in the 2016 and this month, I actually have gas usage to report!!... well, a little anyway.

First off, EVs are not the only cars that do poorly in very cold weather. My Corolla which has a lifetime average of 38 MPG PLUMMETED in its short stint this month to 33 MPG which is even lower than its usual 36ish MPG during our normal Winter weather.  But it did travel 46.9 miles costing $3.75 or roughly 8 cents per mile.  There is an outside possibility that it might be old gas since the gas in the tank is from Oct 20th. Well shall see on the next fill up which I am determined to have happen sometime later this month. (filled up Jan 5th)

And the biggest reason I will be using the Corolla more is because my LEAF has already exceeded 3000 miles and its not even 2 months old yet!  In December, it traveled 1618.7 miles costing $31.81 or 1.97 cents per mile. This was helped by just under 100 kwh courtesy of NCTC. I did incur a $2 public charging fee. It was at the location I needed to be but a change in plans caused me to only get 35 mins of the hour I paid for. Another reason I like per minute billing!

Other than that, my recent extensive experience with fast chargers has me realizing that "you just never know what you're going to get!"   3 times, I have plugged in to get half speed charging presumably because of the cold battery pack.  Now, I was told (several times) that as the pack warmed up, the speed would increase however, I have seen ZERO evidence of that.  So what I tried once (since I was in a bit of a time crunch) is after charging just over 10 mins at 28 KW on a 50 KW AV charger, I unplugged and restart the charge and boom! straight to 48 KW!

But that has only happened one time and despite a lot of cold weather and a cold pack, I have had limited chances to charge and reproduce these results. I thought I would yesterday with only 3 temperature bars when I saw my batteries at 33.5º! 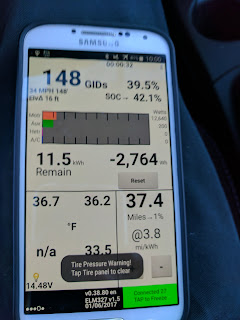 But it was not to be. Although it was still only 27º, the Sun came out and was VERY bright which meant the additional radiant heat helped to heat my pack up so by the time I got to the charger, my pack was up to 4 TBs with batt temps in the mid 40's and the NRG started me at full speed and yes, this was the same station that started me at half speed just a week prior! But I am sure I will have more opportunities to try it again, so stay tuned.

Other projects I am working on is I am starting to sense that my 30 kwh pack sheds heat better than my previous 24 kwh packs. It could also be the fact that we are in the middle of our coldest Winter in over a decade but we shall see.  I do know that my pack is nearly always within a few degrees of ambient temps of my garage every morning. I did not see this with my previous LEAF which sometimes took more than 2 days to cool off after a vigorous QC...

Case in point; Yesterday did a full speed charge of 30 mins finishing almost exactly 24 hours ago. I then drove home, going out a few short stints but mostly in garage with door closed so stored in moderate temperatures that generally run in the mid 40's with the weather we are having now. 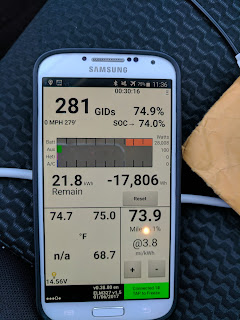 Now, unfortunately, I did not plan this well since I plugged in a few hours ago and would think that some heating up would go on but just checked both garage and car and got this (garage was 2º colder when I got up) 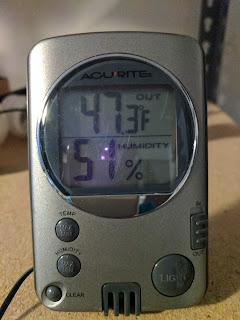 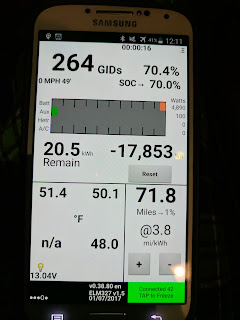 But again, even after heating to 5 temperature bars (first time seeing 5 in a month!) the car is still cooling down overnight. (ignore the similarity in readings, there is more than a 50 mile difference from the two pix)

Again, the real proof will happen come Summer time when it could take 3-5 days to cool off from a fast charge but so far, everything is looking very promising!

getting dark blue was a HUGE mistake. A car wash barely lasts 2 days.

My mileage efficiency still sucks so its kinda like getting a 27 kwh pack...sort of.

I have been following the Chevy Bolt forum and sadly its really looking like not waiting for the Bolt was the right choice. The lease options are insane. Two people have posted lease details and both are over $500 a month in real costs, with very limited annual miles and a crazy 25 cent per mile penalty! I did the bleeding edge, pay premium prices to be first, thing with my first LEAF and not going to be doing that again!

At the same time, I am really considering getting rid of the gasser and getting the Bolt. But looks like that option is likely a year out. Part of the reason the Bolt leases are so crazy right now is because Chevy's leasing arm is pocketing all of the Fed tax credit. Now there are a few Chevy fans who are using Chevy's lease cash of $2500 (which is only available in a very select area currently) as a partial federal credit but that is not how it works. Nissan gave me the full $7500 credit PLUS $4125 lease cash, so one is not the other people!

Either way, if any of you out there have any info to share on the fast charging or the cooling rate of the 30 kwh pack, respond below!
Posted by DaveinOlyWA at 12:38 PM 2 comments: