Ok, I admit I stole that line from somewhere... but an event of monstrous proportions happened that day regarding my LEAF and the aim of this entry is to get to the bottom of the issue. If you recall my April 2018 driving log, I was well on my way to an acceptable level of degradation (less than 3% over 3 years or 1% per 5,000 miles) on my nearly new 40 kwh LEAF until... well the morning of April 12th when I woke up to this.

Overnight, I lost a chunk of battery that normally would have taken me 7000 miles to lose using the same trend line that matches the rest of my 5600 mile LEAF life!  With this humongous overnight drop, I have still only lost 1.43% so far.  This despite several multiple QC days, baking the pack to 120º plus, etc.  The decline has been daily but very very slow.  But remove this one day hiccup and assuming first bar loss at 80% SOH, I was projected to lose my first bar at 167,164.2 miles!  This was.... "acceptable" but with the drop (and not enough time passed to overcome the day) my first bar is now slated to drop at 78,321.7 miles.

Below is two graphs charting stats over time and one for miles.  As you can see (ignoring Hx which has simply gone off the charts) the trend lines are nearly flat minus the one day.  Notice the dip in SOH around 2000 miles? That was a SW change to recalculate SOH on LEAF Spy that did not work out so was returned to the previous method.  I have to think the previous method was the same used by hundreds of LEAFers over the years. Data that has all but been proven to accurately reflect the health and capacity of the LEAF battery pack. 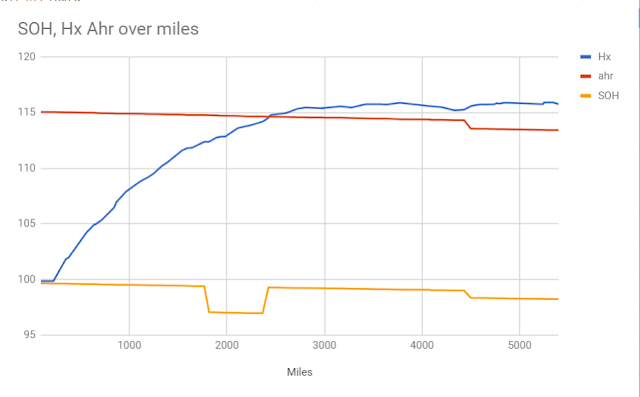 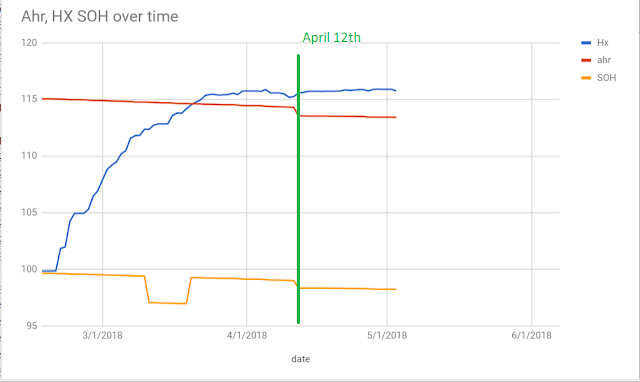 Well the first thing to do was examine logs from April 11th and 12th to see if anything stood out.  Did I bake it once too many times? Did I hit a new temperature high?  Would the effects of such actions manifest themselves immediately or would they take a few days?  It was these questions I hoped to shed some light on.

The day seemed normal. As always, I record LEAF Spy stats daily first thing in the morning before doing any driving. 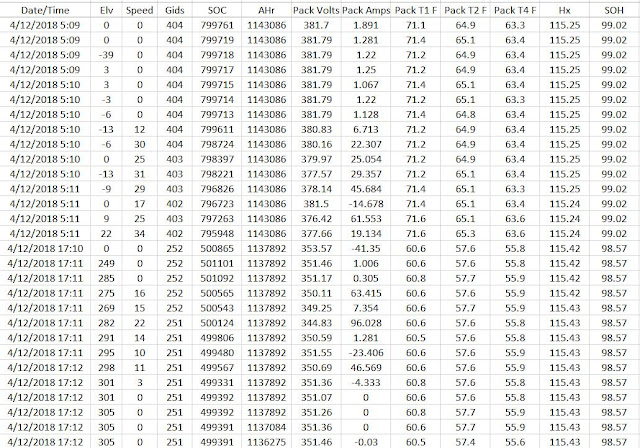 So I leave home at 5 AM and stop to charge at 5 PM.  Notice pack temps have cooled considerably. Guessing near ambient which means parked somewhere probably all day in the shade!  The log was ended before I got home but the single QC of the day did little to heat the pack. 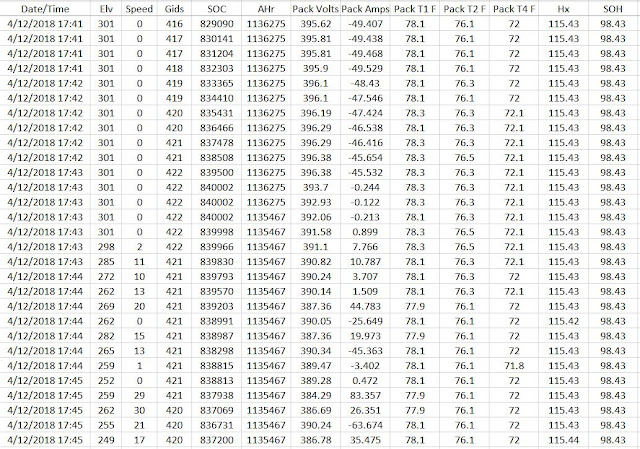 But the damage was done. The new baseline was 98.43 % SOH.  This I had to accept.
The Horizon
All is lost!!... well, actually that might not be completely accurate.  The massive drop in battery health has hardly put my pack on the DL.  What it did do is;
**Failed to make me "QC adverse" since I have quick charged 11 times in the 29 days that have passed.
** Failed to make me "Heat Shy" since I did journey to Ellensburg in Central Washington a trip of 353.2 miles where the afternoon temps hit the high 80's.  May not seem hot to most but in full Sun (required due to incompatible QCs of Aerovironment forcing me to L2 for several hours) it was baking.  OAT registered 93º on return to car after basking in hum of Arby's AC.  And my sprint to Tacoma from North Bend did cause a near record high of 121.5º batt temp.
Now extrapolating 29 days of data into a 100,000 mile projection is more than a bit crazy BUT... I got used to being called that so...
Since "The Day" I have traveled 1080.1 miles losing .18 ahr, .15% SOH while gaining Hx (as usual) This puts my new "Bar Retirement Day" at 106,280.4 miles.  Again, this will be acceptable to me realizing this puts me a few miles over the range of a new 30 kwh LEAF.
BUT...
This is somewhat disappointing as it likely means I will miss my chance of getting a free warranty replacement of a new improved battery pack a few years down the line.
I knew this car wasn't perfect.
Posted by DaveinOlyWA at 10:23 AM 2 comments:

April 2018 Drive Report; I Think We Are Alone Now

The monthly drive report has morphed quite a bit over the years. My blog was never intended to be public. It was essentially a group of notes on my transportation costs recorded for use on various online sites, a diary more than anything dating back to Thanksgiving 2003 7 months before the arrival of Prius #1.

My monthly logs started out comparing the cost of my Prius to the "average" car. Then it was my two Priuses, then the Prius and the ZENN, Prius and LEAF,  LEAF and Corolla, etc.  During my time at RGIS, it morphed again into a very interesting "Gasser verses EV" contest due to a very heavy driving schedule that illustrated a shifting balance dictated by an ever increasing range, more public charging and simply a shrinking need to use gas. But that job is no more. There was just too many obstacles including massive road construction projects that would have greatly impacted my day.  That combined with the fact that my job was hardly coveted meant it was simply time to move on.  So that reason along with the much more useful 40 kwh LEAF's range meant the Corolla's time was done.

So now I am down to one.  So comparisons against "phantom facts" is not something I can participate in but mostly because I constantly chide and challenge others who do the same thing.  This morning from Green Car Reports;

What kind of car are you driving? It costs me about $30 to put diesel in my 2015 Golf here in Florida and that is good for 600 miles under typical highway 75 mph conditions. I am 100% certain that I would be saving no money using a fast charger and travelling under equivalent speeds and conditions.

This is THE reason why this blog exists. I record the data. Anything you see here comes from personal observations (which can include personal conclusions) or data logs (mostly from LEAF Spy) but more importantly,  its not a "seat of the pants" estimation.   The person above is claiming 5 cents per mile and I have no doubt he attained that figure a few times but claiming that this is normal?  Maybe a few months ago when gas prices were lower?

Back in the early days of LEAFdom (driving my ZENN around created more laughter than curiosity...) I had a lot of interested people come up to discuss why their gas so and so was a better fit for them and the logic employed was frequently both comical and mathematically impossible.  But what proved to be the more difficult challenge was showing how their thought processes were flawed.  I realized I was not going to teach the World to change, I had to do it by example.  So the monthly driving log lives on only to show what can be done since I actually did it.  Can you duplicate (or even possess the desire) what I did?

Maybe, maybe not.  You could easily do better. My days of driving carefully left soon after I got my S 30.  The teeny tiny range boost was shockingly liberating.  Sure, I had challenges, but I also had several days when I knew I would be getting home with several miles to spare no matter how fast I drove so I broke the law.  I can honestly say that in the short 2½ months I have had my 2018, I have easily exceeded the combined total of miles driven over 70 mph in both my 2011 and 2013!


Obviously hard to extrapolate much from this limited data set.   I guess I should add a few columns; % lost since new.  Now what is considered the most important of the stats is an opinion expressed by many so I will express mine and say that I have lost 1.4% of my ahr potential in 5,000 miles which equates to under 9% at the end of my 45,000 mile lease. That is ok, I guess.  I personally think 5% considering the much larger pack size is more appropriate but I guess we will continue to monitor and see what happens.  Summer has yet to arrive and yeah, I have baked my pack over 115º just under 20 times but that probably didn't do much.
I will say I had one LARGE drop that I cannot explain. Nothing unusual around this time I can think of but before that ONE day, I was well on my way to about 5% loss in 45,000 miles which is very much ok.
Up until that one day, the drop has been consistent but very gradual and no, I have not gained back anything so maybe it was a "pack adjustment?"  I am guessing there is something here but just not seeing it yet. I will be looking at this more for sure.
Posted by DaveinOlyWA at 11:42 AM 4 comments: