If you drive an electric vehicle you are probably well aware that the quiet, smooth ride can create a "zen-like" experience which can help reduce stress especially while sitting in bumper to bumper traffic. But this is not what this post is about.

Now, don't get me wrong; Neutral will not allow you to gain any extra charge cycles or anything like but we don't really judge longevity like that anyway.  Its all about the miles.  So it makes sense that the easier the miles on the car, the more miles you will get, right?

Now some will argue that Neutral driving is dangerous and if you feel that way, please comment below as to why you feel that way because I simply do not understand why anyone would think that.  The brakes still work in neutral so the only thing I can think of that might be considered dangerous is the diversion of one's attention to the road to shift.

Now, maybe its because I have been doing it so long (Also did it in the Prius just not nearly as much) that I have simply become efficient at it from practice but I don't have to divert attention from the road while shifting. As long as I am traveling over 8 mph or so, I shift to Reverse which automatically kicks it to neutral except without the delay. The shift happens immediately. The other thing is that neutral driving requires a much higher level of attention to the traffic and its flow. This should increase your awareness and your level of safety.

But all this can be a lot of work especially if the gains are minimal. I think that if you are in the right situation and know your terrain well, you can go a significant amount of miles this way and all with minimal wear on the battery pack.

I found that coasting in neutral does not hold up traffic especially if taking advantage of slight declines. Even the gentlest of downhill slopes allows the LEAF to maintain speed very well.  Like all new processes, there will be a learning curve to overcome but I think the benefits far outweigh any risk.
Posted by DaveinOlyWA at 5:47 PM 8 comments:

During the 2015 Detroit Auto Show, General Motors introduced the Chevy Bolt BEV.  It is tentatively scheduled for as early as a 2017 release at $30,000 after incentives and reputed to have a 200 mile range on a single charge.

Elon Musk has been talking about his Tesla 3; An affordable mid sized EV starting at $35,000 before incentives with about 200 miles of range to be released in the future. Most think this will be mid 2017 or early 2018.

Carlos Ghosn of Nissan alluded to a Nissan LEAF II that will more than double the current range putting it in the 175 mile range "at competitive pricing." Add to that an unnamed Nissan Engineer stating a new battery chemistry that has finished testing giving the LEAF 249 miles of range. (No, not better than the two above, only using a different testing system to get that number.) Despite the varying  claims, I suspect the true range differences between the three to be minimal.

Since the current 85 mile range Nissan LEAF meets more than 80% of people's needs; with more than double the range, will the long lines at the highly valued fast charge stations disappear?  Although highly valued, most fast charge stations are lowly regarded due to poor reliability.  Some have required resets to function which is not a big deal to someone who has been EVing 4+ years and is willing to "walk the line" in a manner of speaking (FYI; a few years ago when faced with a non functioning DCFC, I was told by their tech support to power cycle the unit by flipping the breaker. Obviously not the first thing we want to do but...) but to the newer crop of LEAFers (not forgetting the other "handful" of Chademo-enabled EVs...) they are generally stuck without a charge if the station does not function exactly as the instructions printed on them states.

I can see people not wanting to invest a lot of money into a charging network based on these claims but we need to keep in mind a few different things;

1) New products are usually rushed to market so most of these "pre-release" announcements generally reflect best case scenarios.  So we are likely looking at least 2 years down the road for the first of these new 2nd Gen EVs. That means a lot more shorter range EVs hitting the road to share an already over taxed public charging system.

2) Mistakes were made in deployment of the current charging network.  More fast chargers at "convenience" locations like fast food restaurants, etc.  More (MUCH more) L1's at long term parking area like employee lots and park and rides.  No, these are not designed to give you a fully charged car (although that may well happen) but does add 30-40 miles of range which may well be just enough to cover after work errands and the return home. Concentrate L2's at locations where people tend to spend more time.  Malls, movie theaters, parks, sporting venues, etc.

One thing that always irked me a bit was the ideology between placing fast chargers. The "25 miles apart" might sound good for someone traveling through the region but it really sucks for people who have to travel within the region like me. I think they should be every 5-10 miles AND in pairs to be effective.  The real issue with a lot of the non use of these stations is the distrust many EVers have developed after multiple failed attempts to get a satisfactory charge at many of these locations.

3) Pricing. These announcements may seem like a great deal especially if you are driving a Chevy Volt or Ford Focus EV that cost you over $40,000 before incentives but to the newer wannabe EVers, these prices might be a bit hard to swallow.  Underestimating the demand for shorter range EVs at prices that could challenge current mid sized gasoline cars would be a critical mistake. Although gas prices have dropped complicating the issue for people who are not truly aware of just how cheap an EV can be to drive, I see the typical commuter household morphing from Gasser-hybrid/EV to Short range EV/Long(er) range EV. (Matt; if this sounds like you, that would not be a mistake!!)

4) Only in the Oil Industry do incentives go on forever, for everyone else the light at the end of the tunnel is on. I am predicting that the above 3 auto manufacturers will have less than a year left of the maximum tax deduction for EVs by the time these 2nd Gen EVs hit the streets. The currents regs gives a $7500 deduction of taxable income (cannot be rolled over to another tax year)
for the first 200,000 qualifying units from each manufacturer. After the 200,000 unit mark is reached, it drops to 50% in the quarter after the quarter the  mark is reached (so roughly 3 to 6 months later) then 25% for 6 months, then nothing meaning that Nissan who is currently leading the numbers game could see sales as early as mid 2018 with no federal incentives at all.

This puts puts the small select group of early EV manufacturing pioneers under great pressure to offer vehicles that are priced competitively . I have already discussed how the current incentive is HIGHLY UNFAIR and penalizes the companies that brought us EV options years ago. Companies like Toyota and others could wait for the technology to mature then put out a product with the full incentive intact for years. I can see a situation where Toyota could price an EV at say $3750 below market allowing them to cannibalize sales from other manufacturers who no longer have the tax incentive and bolster their profits as well.

In a nutshell, the greater range the 2nd generation EVs will provide will be wonderful but this should not signify the end of the shorter range EVs. I am a daily testament as to how well 85 miles can work for a great majority of the driving public.  EVs for the family running covering the entire price range is where we need to be and hopefully the auto manufacturers recognize this.

Finally; even when gas is dirt cheap, it can still be unexpectedly expensive. It is really too bad that damage caused by the user cannot be billed back to them when using the public charging network, but gas stations have a different policy. You break it, you pay to fix it.

I was eating a Gut Dog while working at a store in North Tacoma when this happened. I wish the guy would have let me know what he had planned to do so I could have gotten it on video but can't win em all I guess. 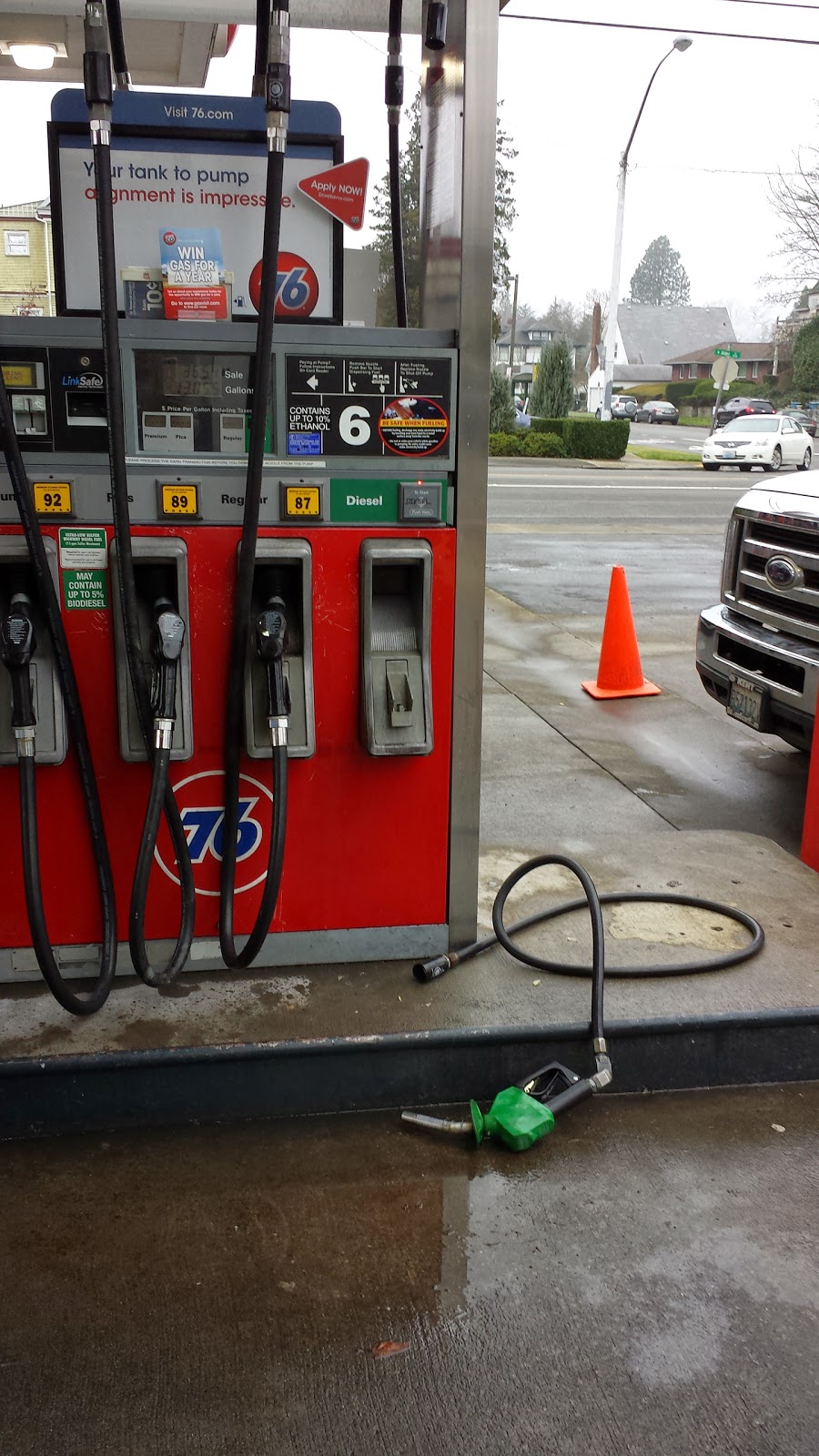 Now, as luck would have it, the gas pump maintenance man was on the premise and his rough estimate was $400 to fix the pump but that was a bargain since normally there would be a $250 trip charge added.
Posted by DaveinOlyWA at 3:25 PM 4 comments:

Ok, I admit I have been saying for months that I would be driving the Corolla more due to exceeding the lease miles on my LEAF and this month, I finally did it. In December, I drove the LEAF 610.1 miles at a cost of only $6.03 cents which works out to a ridiculous one tenth of a cent per mile and did it without a lot of free public charging. Work reimbursement was a mere $8.64. I ended the year with 17,446 miles on the odometer.

Puget Sound Energy is kicking back some of the profits from selling off assets a few years back dropping my rates to 4 cents per Kwh. Unfortunately, its rumored that rates will be back to normal this month. I guess I picked a bad time to not drive the LEAF.  Murphy's Law wins again!

The Corolla drove 832 miles at a cost of $61.17 or 7.3 cents per mile which was helped a lot by dropping gas prices. FYI; expect even better numbers for Jan as average price paid for gas in December was $2.44 and so far this month, average for Jan is under $2.15 a gallon! So I guess I picked a good time to drive the gasser (Take that Murphy!) Work reimbursement was $257.92

Final Note; Not driving the LEAF really does kinda suck. I have to constantly move equipment needed for work back and forth and the Corolla does not have automatic door locks so having to take the key out has really become a bit of an alien concept for me.

But as things usually do, it gives me a chance to run a bit of an experiment. Since I started driving the LEAF much less, I only charge a few times a week and SOC runs between 25 to roughly 70% or so and my battery pack stats have dropped to where they have settled to 62.20 ahr and 95.79% health. This is a pretty big drop from 65 ahr and slightly over 100% health.

So any bets on how much I can recover when I start exercising the LEAF again?  Does anyone think that I might lose this capacity permanently if I let LEAF take too long a vacation? There were times when LEAF sat as much as 48 hours straight but that will be rarer now but driving under 15 miles a day is pretty common right now.

Post your thoughts!!
Posted by DaveinOlyWA at 1:20 PM No comments: