April 2021 Drive Report; I Was Looking For A Plug Tripped Over Something

April saw two weeks of Summer which means I achieved "summer like" numbers almost doubling the miles driven over 4 of the past 5 months @ 1364.3 miles @ 4.78 miles per kwh.  With only 44 kwh at tier 2 rates, this is likely the last month seeing tier two till probably October. Nice!  The roadtripping I did did accrue some public charging fees but random opportunity charges plus some full charges at home reduced the DC fees to an unexpected $2.28 which was more than "ok"

As expected, April was adjustment month and knowing that coming in, I had planned to do more full charges (first one in several months) and did 3 of them! My adjustment was a good one and time wise aligned with my 2018's positive adjustment. I gained over 2% in ahr putting my LEAF back to stats I had last seen in September 2020. Acceptable!

I tripped over a plug! And a free one at that! Volta has installed a plug at the Safeway in Tumwater.  Interesting in that they did both styles; one mounted to their display cabinet while the other was simply a post with the EVSE mounted to it. 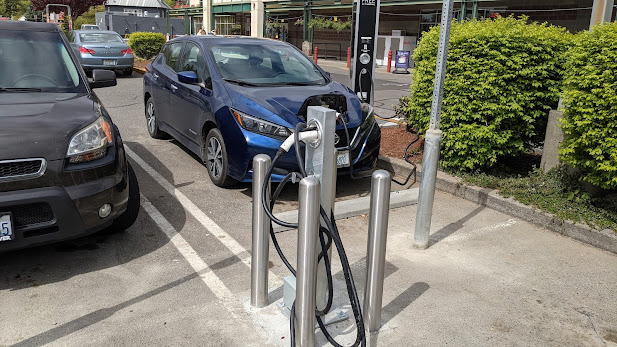 Electrify America also provided just over a day of free charging as well to Honor Earth Day 2021. I was able to hit the Walmart in Lacey (2nd closest location from me) 3.3 miles away on Wednesday night the 21st and West Olympia (3rd farthest from my house @ 6.8 miles) Thursday night gaining a total of 36 kwh.  I would have gotten more but didn't really have any road trips planned so I did nothing but charged to 80%  just before the promo ended.  So does that make me feel better about EA?

Nope, not even a little bit. I am more than happy to take what they are handing out but it does not change my feeling about how they have managed to turn a punishment into what will be a major market advantage...eventually.  For Earth Day and extending thru Saturday night, I happened past both EA sites several times and never saw a single CCS car charging which is unusual or simply bad timing as the usage rate is definitely much higher on weekends but one of my EA Earth Day charges, I had a LEAF pull in 20 mins into my charging (I had already planned on 30 mins and go) but at 29 mins, ANOTHER LEAF pulled in so it 3 of us at one station while the other 5 CCS only stations sat idle. I won't say this is typical but I have seen a queue on the Chademo while the other stations were empty and handful of times and I don't frequent either area all that much.  I know EA is losing money (our money BTW...) so being able to utilize more stations for the Chademo crowd seems like a no brainer... but then again...that is EA; No brains!
Is Public Charging Really A Nightmare Or Simply Life?
From the stupidity of EA to EVgo.  Granted EVgo doesn't (or didn't) have billions they were forced to spend so unlike EA, increasing thru put is actually a thing. Not only do they make every station available to CCS or Chademo, they have started adding Tesla plugs as well. (hope you guys didn't pay too much for that adapter) and it makes sense. Despite the feeling that all stations are always busy, the reality is quite the opposite. Most stations still sit unused most of the time.
Now there is the obvious exceptions and the sunny 3 day holiday weekends, etc. but lets face facts.  What "survives" during these 3 days weekends? Hotels? Campgrounds? restaurants? (I won't mention freeways)  NONE of them survive.  Its simply a fact of life we have come to accept; traffic will force us to spend extra hours on the freeway. Holidays will mean the normal 10 minute wait for a table is now 45 minutes.  Book your hotel in January because doing it now means paying much more money  for a much less desirable room. So yeah, we all have public charging nightmares to share but is it really all that different from our daily lives?
EVgo Expansion
EVgo is my main option because its cheap, I signed up for all their promotional crap, etc and it has paid off.  They partnered with everyone it seems and got a chunk of cash so they are instituting HUGE plans expanding their network. More cities, more redundancy and MORE SPEED!!  Recently I was north of Seattle for the ID 4 test drive so on the way home, I decided it was time to try out the faster stations and the best part was the price didn't go up so still paying the COVID rate of 20 cents per minute! This means I am getting power cheaper than any EA option at 120 amps so 200 amps would be even more savings! So Broadway Whole Foods I headed to and the station was a bit slower to initiate than normal and thinking part of that might have been the underground parking affecting cell service somewhat but it was a minor delay and it did not disappoint!

Despite the great rate of 20 cents/minute, I didn't need much and when billed by time, its all  about unplugging when the speed drops too much. This was perfect for me as I plugged in, dashing inside for a pee deposit and returned to the car gaining 2 plus hours of "L2 charging" so I unplugged now having enough range to go home AND come back for more charge and BOOM!

HOLY CRAP! That is 5X less than my home rates! 2.1 cents/kwh? I'll TAKE IT! Now, don't know why it happened? Maybe a glitch in billing or simply not completing every thing after the station upgrade? Either way, I am thinking I will revisit this station soon when I am in the area again!  I did look at my account and unlike the normal entry under billing of "COVID Care" I got "other non networked".
Either way; Glad I stopped!! (to charge that is...should have stayed a bit longer!)
Now, being "cheaper" is dependent on mostly charging at the max  rate your car can accept for most of the session. This is a challenge for the "under 40 kwh" crowd due to a required higher target SOC.  But another reason... BIG reason I like EVgo is that 100% of their DC power is renewable energy. Yeah, that is right; ALL of it EVERYWHERE.  This means utilities have to continue to boost their portfolio's towards the green spectrum as EVgo will triple their network within the next 5 years adding 40 new locations.
A final note; Electrify America just had its 3 year anniversary of its first DC charge session. The first EA stations installed in the northwest allowed Chademo to run at 200 amps (it was paired with a 150 kw or 375 amp CCS) and they were still billing by the minute. This allowed a smart charger (LEAFer) to get a pretty decent price for a charge.  But that all went away without warning and a week later, the per kwh pricing was announced.  So a double whammy.  Although not cheaper, it would have been enticing to be able to gain a good chunk of range in the time it took to hit the bathroom and grab something to drink but...not to be.  Sorry EA, but you are making it very hard to be loyal.
FYI; the above EVgo session; 66.9 KW average. That is how you do per minute charging!
WA Dumping The Pump!
Well, sort of. Starting in 2030 less than  9 years from now, WA will ban any new gasser from entering the state. Yeah, that means you can't buy one here nor can you buy one elsewhere and bring it here!  This is a full 5 years before California! To say it made waves is an understatement.
Within weeks, Electrify America announced "significant" expansion plans in WA and cited the gasser ban as the reason.  Even President Biden acknowledged WA as a factor in his future infrastructure planning bill.   Now all this is dependent upon WA replacing gas tax revenue (like DUH!) with something to maintain the cash flow so expect Pay per mile of some sort to be next and yes, expect that to happen much sooner than 2030.  Sucks but its something that simply has to happen.
Webasto
The one network I only rely on during Summer is Webasto as they have extensive coverage south to California and the Oregon Coast. They also have a $20 a month unlimited plan which quickly pays dividends if you plan to take a road trip in the area but there are signs that things are changing.  Webasto recently had a fire sale of their charging equipment, mostly level 2's and its still going on but most of the great deals went quickly as one would expect.  But the network has not been responding to downed stations including some that have been inoperable since winter.  It would appear they have also ended their relationship with Plugshare as the very reliable "Pay with Plugshare" is no longer available.
I will say, it does appear that there are signs of life both with customer service and repairs of various stations all this week. Our 150,000 mile LEAFer (actually now 182,000 miles) who used the Wendy's location daily to make it home reported he was unable to charge yesterday. He called Webasto (and they answered!) who stated the station was down for maintenance which is never good but at least they didn't say "down for repair" and sure enough, 8  hours later he returned and the station worked.
Lets hope things are looking up again. It would be a shame to see the network fail.
Monitoring The Network
Right now, there are so many changes going, its becoming a challenge to keep track of everything. This is why Plugshare becomes so important. I know there are a lot of apps out there but none seem to be as complete so if you hear of a new station or a newly bad station, get on Plugshare and share!
The summer driving season is approaching rapidly so knowing your charging options is vital.  A good example from yesterday; Twin County Transit just broke ground on their EV charging at the Mellon Street Park and Ride in Chehalis. This is a VERY quick on/off location (its a park and ride!) for travelers passing thru so I went to Plugshare...and it wasn't listed so I enlisted an EVer who lives in the area to add it and today; there it is!
Granted, only basic info so far and no pricing or even a launch  date to pass on but this is how we help each other!
Posted by DaveinOlyWA at 10:35 AM 3 comments: