For September 2020, I went 729.3 miles @ 5.0 miles/kwh. Nearly all the charging done at home and no cost yet as the power bill has not dropped yet. Guessing tomorrow. If you are wondering, yes this is one of the lightest driving month in DECADES. I have tracked daily driving statistics since Thanksgiving weekend, 2003. Only in July a few years ago (599.3) was lower and mostly because I was gone for 21 days so car sat in parking lot near Seatac Airport. Even months when I had a gasser did my total never drop this low.

A better picture would be January 2018 which we all know is when my S 30 was murdered the 19th of the month. I had done over 1100 miles. Took FOREVER to replace her. Didn't get the 40 kwh until Feb 16 so only 12 days left in the month but still managed 866.6 miles.
Now, the full force of CV didn't slow me down (Apr 1668.2, May 1324.2, Jun 1396.9) but smoke stopped me dead in my tracks. Unlike the smoke situation of 2017, I could not drive myself out of harms way. There was simply no place to go. At least at home, I had two room air purifiers including one that claimed an AQI of "good."  (about one third the level outside my house)Another lesser factor was the end of Summer. Ok, yes its October 1st and its 76º and gorgeous right this very minute. What I meant was school is in session (not in classroom) so roadtrips with Ryland are now restricted to Saturday our only mutual "day off" Either way, I am currently on a 10 day decline for Hx which I think may be a good thing. Adjustment day in 3 weeks!
Bad Seats Issue Resolved!
Ok, it should be "solved" since it was never the seats at all. I had gotten to the point where even a 30 minute drive was getting painful so bit the bullet, whipped out the insurance card and headed to the local Ortho clinic for an eval.  Luckily Olympia has "Rapid Ortho" a walk in no appointment clinic so the process was quite expedited.  Then COVID happened.
But when getting my initial evaluation and X rays, the Dr suggested that my "single" foot driving could create a situation where muscles get fatigued quicker due to holding a relatively steady but unnatural position. Apparently moving the foot back and forth from throttle to brake was just enough exercise to keep muscles from tightening up. I must say, I never realized how much Washingtonians were into exercise as a lot of car tail lights resemble strobes.  He also suggested therapy which was also derailed by CV which ended up being a good thing.  During my enforced wait I was also labor sharing which meant a 50 mile one way drive which really aggravated the hip situation so I decided to start using cruise control. I normally avoid it because its not very efficient but this was during the worst infection rate period in WA and I-5 was all but abandoned so it was easy to set a speed and go. I was working the night shift 6 PM to 4:30 AM which meant moving the opposite direction of the major traffic flow as well.
Well it worked! Within a few weeks, my hip pain was gone. Not wanting to jump to conclusions as I was also taking muscle relaxers from the clinic but well after they ran out, the hip pain did not return. What was even better was that I didn't have to use CC all the time to prevent the pain from returning.  Apparently, it took quite a while to build to the level of pain I was having so random hypermiling here and there didn't result in any discomfort returning.
Seasonal Tire Pressure Plug
The change has arrived! Gone are the mornings in the low 50's and here to stay (for 6 months) are the mornings in the 30's.  I run my tires around 43 PSI in Summer dropping to 42 PSI in Winter. With the individual TPMS readings on the newer LEAFs, checking pressures is easy so I spend roughly 1.4 seconds on EVERY startup and check them.
The reason we should adjust is tires should be set during the coldest part of the day. So like first thing in the morning before driving anywhere. Increased pressures as the day warms up is normal and ok. The reason we want to set tires before driving around is because the front tire wear faster which means they heat up faster. This can lead you to undershoot your target pressure.  As far as what pressure you choose, I will leave that up to you but NEVER exceed the max tire pressure on the sidewall.  Higher pressures do lead to less tire failure and longer tread life.
Now the pressure in tires adjust roughly one PSI per 10ºF temperature change.  As we know, clear sunny Fall days have one common characteristic in nearly all parts of the country; In the Sun, its glorious but when the Sun drops behind a cloud, it gets cold FAST!
The other day, it was a typical Fall day with temps in the fifties but there wasn't a cloud in the sky. The Sun felt great and avoiding shade was highly recommended.  I was at the mall getting free food for the car (I had to pay for my food) so its not hard to tell which side of the car was facing the Sun 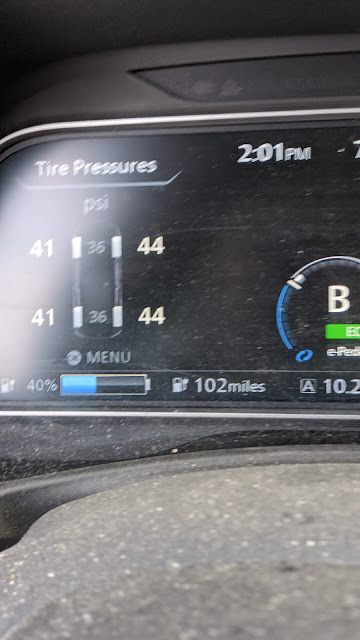 If EA was DA
Ok, if "Dave's America" public charging was doing this. I would have gone with a mixed pricing scheme. To be clear; there is no requirement to bill by the kwh "anywhere"  Now, tiered pricing shouldn't be an alien concept since EA had it already. They also had customary pricing for certain cars who were being billed tier 2 rates despite the fact that their car could achieve tier two speeds.
Obviously the ideal solution is simply build more stations and make them per kwh only but exactly how much money should we pay (yeah, its OUR money EA is spending BTW) to cater to the ¼ of 10%?
Now if EA's aim was more revenue, maybe they need to realize how much business they lose with one Chademo at each location.  Last Summer, I saw THREE at one location. One charging, the other two talking about which station to divert to. Believe it or not, neither used Plugshare and had no idea Tumwater Webasto existed. They did know about Olympia Nissan and were discussing failed charging attempts and workarounds when I walked up. Now EA supposedly closely monitors plugshare so I started doing failed check ins every time I happened upon a site where the lone Chademo was in use and other CCS only stations were sitting around bored with nothing to do. But after more than a year and a half of doing that, it doesn't appear to be working so maybe its time to bombard EA's customer service line with calls and emails complaining about the new pricing structure.
Moving
I should have taken way more pictures but most of you have already been there and done it so I do have one. Because my move was two fold; one to storage and one to mi casa,  I did it over 11 days and several dozen trips. 8 to pack, 3 to unpack although the last day had nearly nothing to haul.  I did have one pickup truck load of help but the rest was all LEAF ! 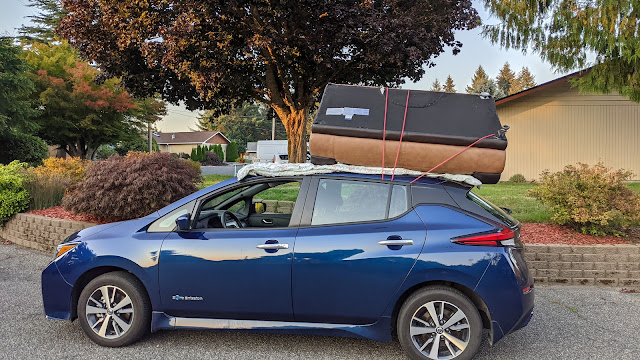 Posted by DaveinOlyWA at 1:08 PM No comments: