In keeping with my policy of mostly DC charging only and to no more than 80%, I felt this was my best bet for long term battery health.  Yes, when my NCTC runs out mid month, so there will be less DCing and more home charging.   Now, I did get a bit of a reprieve when Nissan added a $250 perk from EVGO for any new LEAF purchases starting November 1st.   Now, I can't help  but feel personally responsible for bringing this tidbit of good news to the EV community as I picked up my E Plus November 16th and the promotion was announced a week later and retro'd back to November 1st so I would be included despite actually getting my LEAF before the promotion was available.  No Thank yous needed, I get my thanks from seeing another converted EVer!

So my GREAT battery stats thru the first 3,000 miles were not a surprise. I had lost a mere few 10th of one percent on both the ahr and SOH fronts and all was golden.  So I did not hesitate when I heard there was a HUGE storm that would cover the entire Western Olympic Peninsula which sounded like a chance for a great road trip challenge of driving the Highway 101 loop where no DC chargers exist.  So I plugged my E Plus in to my home EVSE for the first time, charged to 98%.  This was the first time over 82% (done on the Volta level 2 while at Star Wars...) since bringing the car home, then took off.  It was a fun trip albeit a rather wet one.  I did DC 3 times (once in town at the end of the trip to check on Rapidgate effects) plus a handful of short level 2 stints. IOW, nothing major or unusual.

The next day was errand day so bunch of short in town trips. I had enough range to cover it w/o charging and thought nothing of it.  Then Saturday came, 2 days after my Highway 101 trip, and it happened.

As we know, starting in 2018, the LEAF pack stopped doing its random ups and downs loosely based on the distance drove and fast charges collected.  The stats actually never went up.  It was just a slow steady drop. Some days, no drop as much as 3,4,5 days.  Or a drop of .01- .02% here and there.  Nothing major.  But then, every 90 days a big drop as much as one percent or more. This went on like clockwork for 12 to 18 months all over the World and then all but stopped. In fact on my LEAF; month 15 my stats went UP! First time the numbers went up at all. Before not even a single .01% increase.  But that also signaled the start of a degradation rate that dropped even lower than the 89 days between adjustments.

So I went from expecting an SOH under 90% before the 4th of July to thinking I would be at 92 something % forever!  As we know, I traded up for the E Plus in Nov (which means two more adjustments that never happened) with SOH still around 92.23% or something having lost .08% the previous 6 weeks.

Now a few early E Plussers including ones who had the 40 kwh like me stated that they didn't see the adjustments and.... well, I should have known better since they were all in the 97's and 98's% SOH and I was still over 99½%.  Guessing with all that range, they simply didn't care and I don't blame them.  Either way, I felt that since I lost 7% in 1¾ years on the 40 kwh, the bigger E Plus would lose less because it was a bigger pack. I didn't expect my driving to change much so the average 16,000 miles a year wouldn't change. So I was looking at 4-5% initial drop then settling into a much slower degradation pattern.

Before anyone thinks that my process didn't work, I have to interject by saying all EVs experience a large capacity (as in ~4-7% more or less) drop initially then they settle down.  Granted, earlier LEAFs had undersized batteries which greatly hampered their ability to hold up. This along with Nissan instrumentation; created range anxiety and charging to a higher SOC than was likely needed. This obviously made it worse.


Other than less DC charging day to day, I won't be changing any charging habits.  I will still keep it no more than 60-70% most of the time only charging higher for longer excursions.  I know I had said this many times but too many people who charge to 100% and haven't lost a bar are on Facebook and other social media sites saying it doesn't matter and that is simply wrong.  It does matter. How much it matters all depends on what you plan to do with the car but for maximum longevity, its best to keep the pack around 50%.   Oh course, this won't be possible but you get the idea.  So yeah 80-20% is good but 70-30% is better.

For validation, one need look no farther than their phone. Battery management apps abound and all are chalked full of advice. Many will even give you predictions of screen time and battery longevity based on your actual usage history (Hopefully doing a better job than Nissan did on the GOM...)

So if you are the "plug it in and forget" type, then skip this sec... Oh too late, you already read most of it.  But if you want to stretch that battery (and keep the phone a bit longer)  here is a couple pix to digest. This is my phone's battery app.  (Notice where my SOC is?  With a wireless charging pad, its easy to do multiple charging sessions without worrying about wearing out the charging port)

So how inconvenient is charging to 60%? Well, its not.  Obviously the public charging thing can be inconvenient especially if you are doing nothing but watching the station run but I do have things to do which is mostly wants and rarely needs but it takes up all my time at the station.  Although I get 30 mins of charging free at EVgo, I frequently unplug at 20 mins give or take when I don't feel like waiting the extra 10 minutes which is the norm.

But soon, it will be nearly all home charging which means no real compromise. As far as making 60% work? I will find a way! 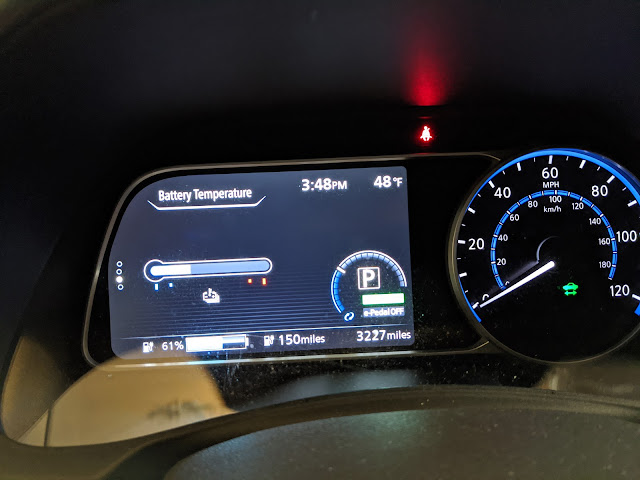 Finally for those who think my degradation rate will continue at the "current" pace, my extrapolated SOH @ 100,000 miles based on my current mileage and loss would be... 16.26%.
Posted by DaveinOlyWA at 6:36 PM 10 comments: