If you have been following my blogs or Facebook rants, you know that I have been seeing over 21 Kwh available on my LEAF! And the best part is all of this has happened without the normal tools we employ to boost our numbers!

No, I have not been camping out at the local Fast Charger (despite the fact that its free...) In fact, I have only had one fast charge event in the past 2 months and the event was not even long enough to get me to 5 temperature bars from 4!

No, I have not been driving my LEAF a lot. Right now, its slow at work which is pretty typical during the Christmas rush along with two 4 day vacations mixed in as well all adds up to me driving much less than normal.

But despite all this I saw 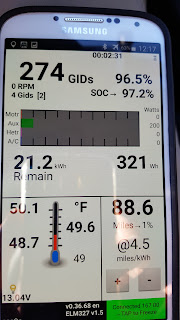 Previous to this jump (which is still being maintained a week later...) I was seeing GIDs in the 260-264 range with kwh available bouncing between 20.2 and 20.5 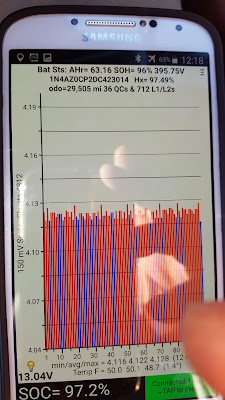 So we have no QCs to speak of, lots of days under 25 miles driven, and MUCH colder weather. All of which had tended to depress my numbers so whats going on??  I was already convinced long ago that my 2013 battery pack was improved over my 2011 pack but this is just weird!

For November the Corolla trudged 687.6 miles draining me for $34.71 resulting in a staggering 5.05 cents per mile managing to completely destroy the notion that we are currently experiencing cheap gas. And yes, the Corolla was driven 400 miles on trips that the LEAF could have done but I am still in "lease mileage reduction" mode at least thru the end of January.

Unlike last year, Winter has decided to make an appearance this year. We already have significant snowfall, tons of snowboarding pix from my nephew Thomas and it looks like the weather will be around for a while so likely not going to see another record breaking February but one can hope!

Ok, ignore everything I said above!! While writing this I plugged in the car and just went out to get a reading and this!! 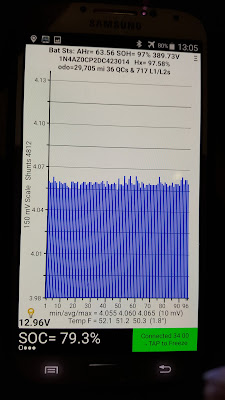 Ok garage temp 53.2º,  battery temps nearly the same. I am beginning to form a different opinion on the ideal temperature range for LEAF batteries for some reason...
Posted by DaveinOlyWA at 1:21 PM