End of the month, end of the year and the new year starts out by being 17º this morning! brrrr. Ended with paying an extra 11 cents a gallon for gas as well. Won't miss 2015 let me tell ya!  Yeah, definitely have had better years (like most of them) but it was at least partially memorable.  Going back to Michigan to see relatives I have not seen in decades was great!

As far as the LEAF goes?  Well I can claim my batteries have not aged a bit! and whats even better is that I have proof! 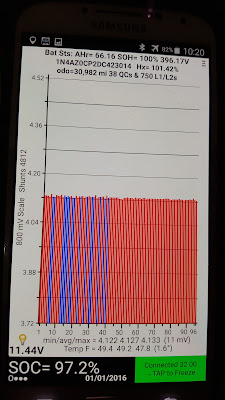 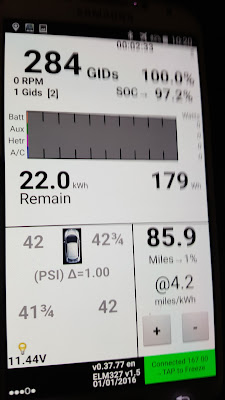 Not too bad for a old car now is it!


Now as much as I like to brag, I have to admit reality comes crashing down hard sometimes.  I took this reading before the charge cycle was complete. The lights were still blinking and all that and with these numbers, the car was obviously in the balancing stage.  I found that occasionally taking readings too soon after the end of the charge caused higher than normal readings.

This was pretty much verified when I went out a few hours later, drove 6 miles with dash reading of 4.0 miles/kwh and was left with  19.9 kwh and 257 GIDs left.  So why wasn't I at 20.5 kwh?  would make sense. I only had seat and steering wheel heaters on and total drive duration of probably less than 20 minutes for trip to store and back.

Actually I have to think my more realistic battery stats should be giving me just over 21 kwh available which is still pretty fabulous.  I did do a blast at the Oly Nissan Dealership a few days ago mostly to test my Chargepoint FOB (remember my other one failed to work at Puyallup and Oly Nissan so it was retired) I am glad they overdid it by sending me 3 of them.  Down to two so not sure why the first one stopped working although it being on my keychain means it goes thru a lot of abuse. Despite never taking my keys out of my pocket for the LEAF, I take them out a lot for other things like flashlights, box openers (ya, using keys not a good idea but at least I can't accidentally cut myself with them!) But the new tier of numbers basically happened after that fast charge. Before the charge, my ahr had been bouncing around the mid 65's. But after a 20 minute charge gaining 9.3 kwh I left and checked LEAF Spy and it was slightly higher but continued to rise pushing my Hx over 100% for first time in a long time.  That was on Wednesday. We shall see how long these numbers last.

Another thing I was checking on is charging speed. I had planned to hold on until the charge rate dropped to 6 kwh but lost patience with sitting there. This time no one came to charge so there was no pressure to leave early but 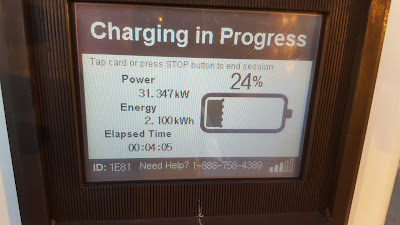 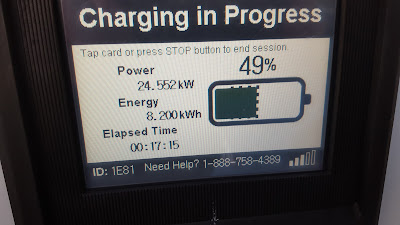 I don't have any idea what the max power output is at Oly but suspect its not near 48 kwh. The rate did start around 40-42 KW but dropped rapidly. As you can see it was approaching 30 KW before it was even ¼ charged.  Either way, glad newer 30 kwh packs charge at the fuller rate much deeper into the SOC curve.  Bodes well for us, not so well for station host especially this one which bills at the rate of 25 cents per minute. (my charge here is free)

Anyway for the month I did not do too well on transferring miles to the Corolla because I did not work very much. The period between Thanksgiving and Christmas is traditionally slow and I took the time to catch up on lying around... As the Corolla was purchased for those trips that simply could not be made with the time constraints of work, it is pretty much never driven for any other purpose and this was the case in December as the LEAF went 1277.3 miles for a cost of $30.77 or 2.4 cents per mile. The cost does include a few stops at Puyallup Nissan (16.67 cents a minute and yes, I do have to pay there) and random Blinks but mostly due to 3 trips running over 100 miles.  For the year, LEAF went 13,535.9 miles (down from over 17,000 miles last year) costing $279.82 or just under 2.1 cents per mile.