There has been a lot of talk about how the Lizard Batteries in the Nissan LEAF have not done any better than the "pre-Lizard" batteries.  Now, I always found that a bit hard to believe and no I did not expect Arizona degradation to disappear magically either so I was more than a bit surprised that there was no apparent improvement but then I read this;

Overall it seems to be holding up quite nicely...


Ok then! maybe there was a improvement after all. I had long contended (from day one pretty much) that the 2013 had more range. Not a lot, maybe 4-5 miles at the most but it undoubtedly went further than my 2011 and I regularly stretch the limits so I am pretty aware of what each LEAF could do.  I will admit the poster above went out and measured his battery stats and had more degradation than he predicted but still claimed it was much better than his 2011.

So naturally I mentioned my battery stats and got this response


Must be some sort of sampling error, right? So you either have to bring your Leaf to SoCal or I need to drive to WA so we can use the same diagnostic tools. Without that, who knows whether there's a real difference. Seriously, you need to locate another Leaf owner in WA to corroborate your data!

Bottom Line: Your are one of the very very few that reports this great of a delta for your mileage. Your battery in some cases has more capacity than a new 2015, which indicates a potential error somewhere.


Well, only one way to respond to that and that is RANGE TEST!!  So I charged up the battery and first thing I noticed is my stats are starting to drop. Oh well, lets try it and see what happens I guess. 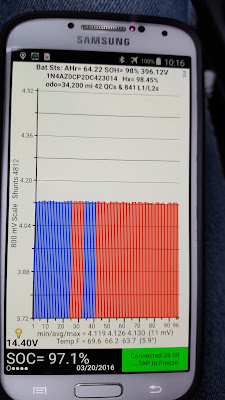 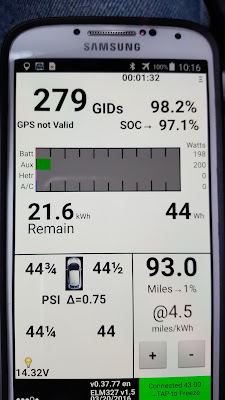 LEAF Spy reading at the beginning of the test

Wasn't sure where I was going but then was invited to Breakfast at my Sister's house which is about a 63 mile roundtrip so I decided to start there.  Well despite being the first day of Spring, the weather was still fairly Winter-like. The temps weren't too bad in the mid 40's with rain off and on.  Traffic was light going there so no major slowdowns, speeds per LEAF speedometer ran 60-65 on the freeway with a roughly 7 mile jaunt on some State Highways ranging in speed from 45 to 55 mph.  Either way my range predictor of 93 miles should be fairly accurate for this time of year. I used the 4.5 miles/kwh as a guide for "mild Winter"  days defined as cold, rain but light or scattered.

After breakfast, I was headed back to Oly when accidents were reported so detoured the back way home thru Yelm on Hwy 507. Its 55 mph with a few slowdowns as it winds thru a couple of towns. I left my Sister's house with desert that needs to be refrigerated so I stopped by home to drop it off then hit up various shopping destinations.  FYI: shopping in this area on a Sunday afternoon is a big mistake. Way too many people out and about.  Anyway, I got home and 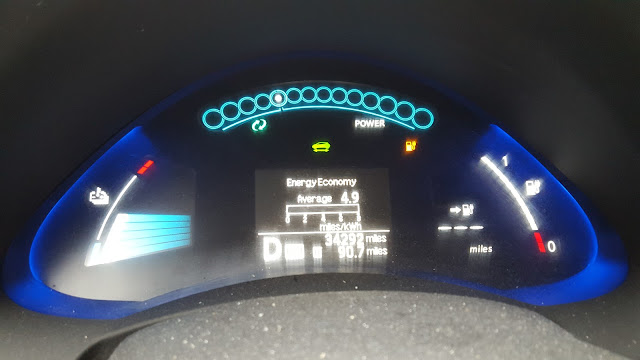 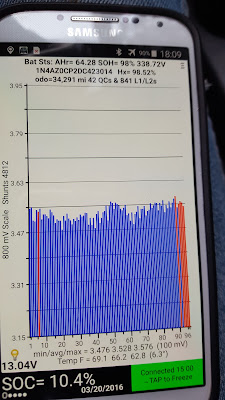 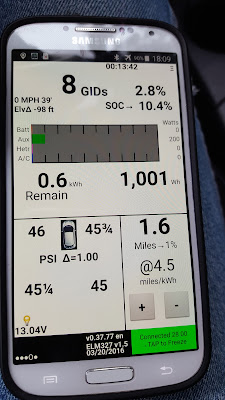 So I supposedly had 1.6 miles left (my personal feeling says less than a mile...) and I went 90.7 miles which is only 92.3  miles so he was right! I did lose something!  But then again, if we look at the starting numbers; if there is 21.6 kwh available then most of that at 4.5 miles/kwh would be 97.2 miles but my range is set to 1% SOC not zero which the implies the meaning of the "kwh remain" so the original 93 miles at 4.5 miles/kwh means 20.66 kwh would be applied to moving the car down the road or roughly 95%.  This makes sense. I did defrost a bit, not too much, radio, etc...

The remaining range of 1.6 miles at 4.5 miles/kwh would only use .4 kwh so I guess in this case, Turtleland lies at .2 kwh

Notes;  The dash shows 4.9 miles/kwh and I did gain .3 while idling thru town in traffic but the dash does seem to exaggerate a bit. Two independent GPS systems will also claim the 90.7 miles driven is closer to roughly 89.2 miles as well.

FYI; Many people ask why I take pix of the phone instead of using screenshots. LEAF Spy is not on my primary phone and yes, I have done screen shots occasionally but they are a pain. Anyone who knows phones would quickly realize this phone does not even have a SIM card in it. So yes, I could do screen shots and pix would look prettier but that only happens when I feel ambitious...

Confession; I confess to artificially inflating my battery stats to perform the test. None of the pix have been altered. That is actually beyond my skill level. I understand Photoshop and what it can do but being able to do something that is not easily detectable is what I struggle with plus I don't have a graphic program other than the basic stuff that comes with my phone.