Well another month, another set of stats!  February was a different kind of month than my normal driving habit. After a very busy January, things slowed down quite a bit at work so most of the mileage on the LEAF this month was personal which included a handful of long drives which of course meant public charging stops.  We will get to that later but for the month the LEAF traveled 1424.3 miles costing $36.67  (remember that figure) which includes $9.14 in public charging fees. Despite that, I still managed to get less than 2.6 cents per mile.

The Corolla as always was used only for work and only went 292 miles costing $13.91 or 4.8 cents per mile. Gas continues to be cheap but still nowhere cheap enough as the econobox costs nearly twice as much as my LEAF but that is only the beginning. Remember the figure I told you to remember?  Well the Corolla also had an oil change during the month costing $36.32.   Now, I could have changed the oil myself and saved a bit of money but the oil change does two things; gets me a free car wash coupon and also allows the mechanic to check on the car since its old and has the VERY high potential of  developing random old age things. It also helps that I know the mechanic and the service advisor at the dealership (AKA Sister and BiL :) )

I mentioned the $9.14 in public charging fees and that runs the gamut from 49 cents per kwh at a Blink L3 to nothing at some Chargepoints.  My local LEAF Dealer in Oly allows me to charge for free cause I got my LEAF there I but didn't use them this month which is normal.  Too bad they could not move to DuPont or something. That comment makes a lot more sense if you read my blog about getting a tow because I could not make it home one day.  But the tow was not due to my poor planning but the fact that our public charging network still has HUGE holes in it after nearly 6 years.  I was headed to a charging station I had used several times before because there was a eatery in the same parking lot and I simply was hungry so I passed up dozens of stops in Tacoma, Parkland, and Lakewood including the NRG station at Tacoma Mall shown below. In fact, this was the very day this pix was taken! 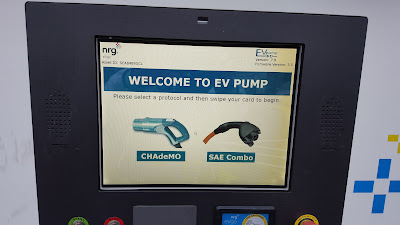 Losing the TWO locations DuPont had including the 3 Blinks at the hotel I went to now makes the Olympia area a kind of charging oasis with no public chargers radiating from it IN ANY direction.  This is a pretty sad statement for a State Capital that should be leading by example!

But Olympia is not the only area having issues. Seattle is well known and admired for the hundreds of charging options it provides but after the sidewalks are rolled up, that rosy picture seems to be a bit wilted.  Recently a Seattleite   was burning the Midnite oil on the job and needed a quick charge to address some last minute issues but all he found were stations locked up or broken. Ultimately, he could not finish the job and the client is unhappy and he went home.  It was 11 pm at night so the last thing he needed to do was wait over an hour for L2 charging when 15 minutes at a quick charger would have done the trick.

I have already commented several times that the State should have been  responsible for putting in the public charging infrastructure. There is no viable business model for the private sector to do this unless its a public utility that has the ability to absorb a lot of the installation costs. So the State simply makes the only sense.  They already have a billing system in place for ferries, toll bridges, etc.  Adding an EV swipe card tied to one's "Good to Go"  account would be simple and cheap. One of the most economically depressed areas of the State is Grays Harbor County, WA. Not coincidentally, its also one of the most isolated areas where public charging is concerned.  I still find it hard to believe that no one at the governmental level has not realized that putting  charging stations in Grays Harbor would bring revenue to local businesses in the area.  Ok, Aberdeen maybe not be the destination we all pine for during the week (well they do have Kurt Cobain's childhood home...) but is on the way to both Westport and Ocean Shores which we do pine for!!

So why is the State dragging its feet after all this time?  A change that would have provided funding specifically earmarked for public charging in Washington State was removed when the sales tax waiver was modified adding a purchase price cap of qualifying vehicles. The only good thing that came out of that change was that Chevy Volts now qualify for the tax break .(if the price is below $35,000) Thankfully, it did not take long to realize that no one was happy with the new law and already a new one is being worked out.

I think the State simply thought it would not have to provide the network, that private interests would step forward and take up the reins. But as I mentioned above, there is no viable business model that will support a public charging network. NRG has already proven that high prices are not acceptable in the market and even their business model is not going to be a moderate money maker under the best of circumstances.

**DISCLAIMER** I love Tesla and what they are doing to promote Electric Vehicles, but nobody is perfect and Tesla is far from that.     **DISCLAIMER**

Part of the hesitation no doubt comes from the fact that Tesla has put in a nationwide public charging system which is well on its way to becoming a very effective option for longer range Electric Vehicles.  I think its a great way for Elon to marry his EV, battery storage and solar businesses together but it also gives everyone the wrong idea about how public charging should come about.  Tesla currently has the dubious benefit of being able to accomplish things without the burden of doing so  within the confines of a viable business model. IOW, they are spending money supporting the product that the product cannot provide.  Our current public charging networks were not paid for by Blink, Aeroenvironment or Chargepoint.  The government paid for nearly all of it.  Yes, there have been some private companies that have put in charging stations on their own dime to which I am grateful to. In fact; I used Group Health stations in Puyallup on Wednesday, free of charge.  But it has become painfully obvious that most privately funded charging stations are not being maintained. The Group Health location I charged at Wednesday had 5 Blink stations but 3 were out of order.

Now, I have talked A LOT about who benefits the most from public charging on the business side. It is the public utility by a long shot.  They always benefit from having someone pay for the electricity. In many cases, they pass the cost of infrastructure expansions and upgrades to the customer as part of the install process, etc.  But public utilities are hampered by red tape more so than nearly operation including the governments, so again everything points to the State as the only logical choice.

*Washington State has oil refineries so supporting EVs too much could upset the State Oil Lobbyist's applecart. I think I could live with this...

*Washington State has no carbon resources. No coal mines, no oil wells, no natural gas.  So no loss of highly coveted manufacturing jobs from a major shift away from these fuels.

** Washington State has a wealth of green fuel technologies, namely hydroelectric and wind. They also boast one of the strongest Solar incentive plans in the country.

*** Washington's Coasts have two things not really going for it. Isolation and unnavigable waters.  But that makes it a boon to develop offshore wind generators. Having a source of power very near by simply makes putting in charging stations cheaper. A network connecting the generators to the grid would have to be built. The big knock on Wind, Solar and Hydro is their inability to provide a reliable base load. Washington State currently uses coal and natural gas to provide our baseload. This has led to wind generators being turned off because they were providing power we could not use while the coal plants were going full steam.  For anyone who is familiar with the coast, we know that the wind almost never stops. In fact; steps would have to be taken to protect generators from high winds.  I don't know if this is possible yet, but I am guessing that smaller bladed models have the advantage of both withstanding high winds and being less visible although I do not think wind generators detract from the awesome beauty of the Washington Coast.

**** Because Washington State has no homegrown fossil fuel supplies, we must import it. Every dollar shifted away from imported Oil and spent on homegrown electricity is a hidden dividend paid back to the state in an endless (and very profitable Green) cycle!

As mentioned above. We have isolated communities in desperate need of new revenue sources. I know the Washington EV community enough that if charging stations were put into the parking lots of a restaurant in Elma, Montesano and Aberdeen, they WILL see increased business from EVers!  Right now, these towns are have the unenviable distinction of having thousands pass by them every day with nearly no one stopping.  An electric vehicle charging station will change that.  Yes, today it will only be a trickle but that trickle will become a flood if the State would only let it happen.

We are the trickle. To become a Flood, we need to start talking, letting our wishes be known.  I challenge everyone here to start filling out comment cards for every business you visit. Ask them for a charging station. I am not saying this will do the trick, but every time a comment card is filled out, public charging is in the forefront for a few seconds. Lets make that a few seconds times a thousand!

Posted by DaveinOlyWA at 9:48 AM