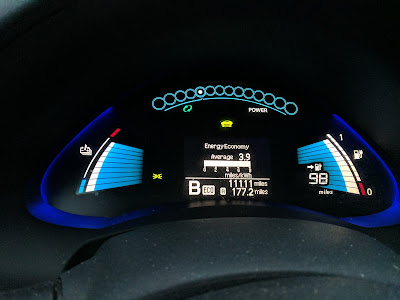 Sometimes, life reminds you that you have something to do. I had not planned on commemorating my 6 month anniversary of the day I took my 2016 S30 home but I just happen to be sitting at the light glanced down and saw this and it hit me like lightning.

But first off; the basics.  My LEAF has had 96 QCs, 132 L2's, and has not lost a single digit on LEAF Spy readings. The day I picked up the car, the numbers were good but keep in mind; the little time on the lot (likely a week or two at the most) would lower the numbers a bit. 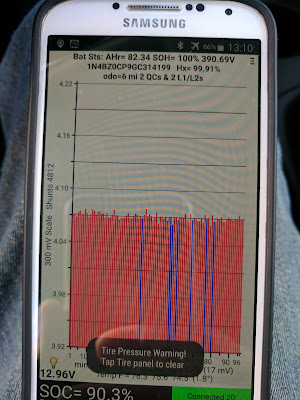 Now we all know that driving it frequently helps boost the numbers and I guess you can say I qualify for that. Recall, I did an experiment where I drove the LEAF less than 30 miles a day for 10 days (most were under 15 miles a day) while doing one full charge, zero QCs.  Did all this a few weeks after I received the LEAF and did see the numbers go down with Hx in the low 97's and ahr down to 81.28.   So in reality, I am well over 2,000 miles a month.

As you can see from the first picture; battery pack toasting is no stranger to this car! I maybe paying for it later, but indications point to the pack cooling slightly better and one Portlandier mentioned that there is now an air tunnel from the front grill that passes thru the battery compartment. Aaron McAfee also mentioned the 30 kwh pack is constructed ever so slightly different in that there is air space between modules as if they used 2 washers instead of one.  So nothing Earth shattering but maybe we don't need it to be.

I will say on "light" days when only 1-2 sessions on a 40 KW charger is involved, I am seeing pack temps nearly normalized over night.  This was a change from my 24 kwh LEAFs where it would take well over 24 hours. What has also been noticeable is frequently a single DCFC on a 40 KW station (Yes, EVGO, I am talking about you) is about half the time, I never hit 6 TBs. That is VERY different from the 24 kwh packs!

But hit an AV station (50 KW) and the scenario changes dramatically.  Just as the 6 kwh bump "seems" insignificant, a charger that is 10 KW faster doesn't seem like it would matter that much at all, right?  Well the dash shot was about 20 mins after a stop at the Centralia AV station.  AV sessions its easy to see 7, 8 or 9 TBs!  (haven't seen 10 yet even on 5 charge days!)  I have seen 9 TBs with just 2 charging sessions a half dozen times as long as the 2nd session is an AV.   And I am not really charging to that high an SOC (sort of...) In fact, I frequently shut AV down when charging rate drops below 25-30 KW.  In the below case, I had to upload the day's work assignments which meant I could do it when I got home or do it while charging. Guess which I chose?  As you can see below, it was 8 PM and my patience ended at 40 KW (along with the uploads) .  Can't even begin to tell you how much this matter! 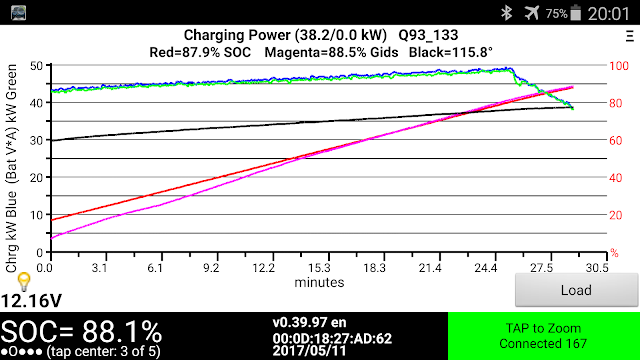 Let me explain further.  On my 24 kwh LEAFs, I would charge at full speed less than 10 mins.  Then the charge rate would start to drop.  So my 30 min charge session on the very same AV stations, would get me 50 to 65 miles of range depending on my starting SOC.  This made a trip of 200 miles very inconvenient. I was now hamstrung by charger placement.  I would frequently have to stop to charge 10-15 minutes simply because the next option was too far away with the problem being that as the SOC got higher, the rate of charge was too slow. We all have heard that its faster to charge on L2 than to stay on DCFC after 80% SOC which is a myth but like all myths, there is a bit of truth and the reality is you might still get a faster charge on DCFC but it will not be a runaway race over L2 after you hit about 85% SOC!

So we add a teeny bump of 6 kwh and BOOM!  Now, I am getting 80-90 miles of range in 15-20 minutes.  Check out my 300 mile roadtrip where I spent just over an hour charging.  The same trip on 24 kwh would have had me charging nearly 3 hours!  But that is only part of the story. Each stop requires time off the route besides plug time. Sometimes its a few minutes, sometimes not.  On my road trip, I stopped a few times for personal need. The car could have gone on so I could have reduced my plug time even further.  Also the trip was done during Winter during typically Northwest rainy wintery weather.  IOW; a real test of usability.  I did a similar trip on 24 kwh a few years back but during Summer or the best driving time and time spent charging was MUCH longer despite the higher efficiency numbers.

This brings me to the 2018 LEAF announcement in September.  There is now growing evidence that 40ish Kwh will be the top option with 60 kwh coming a year or two later.  I predicted the 60 kwh would be debuted by Nissan on another model (NV 200 or SUV?) so maybe a plausible explanation and this has not gone over well with the EV community who feels Nissan needs to meet the challenge of the Bolt (60 kwh) and the T 3 (55ish Kwh)  but I have to say that with the right price point, I can honestly say that it very well could be the LEAF I would buy.

Soooo, "again" I guess I am forced to say, its too early to make any long term predictions on battery improvement and what not since "again" there is nothing to report. By all indications, the pack still works like new.  Maybe I will have something to say at the end of the upcoming long hot Summer (its 42º right now...) or maybe at 22,222 miles (a few months from now. :) )
Posted by DaveinOlyWA at 7:56 AM