This statement may come as a bit of a shocker to most EVers since this is the very thing we do our best to avoid and or ignore.  But the reality is Lithium packs degrade starting almost immediately. Granted; proper maintenance, habits and good SW/BMS can slow the process to a crawl but at the same time, after 24,000 miles, the pack is NOT as good as new, period.  Now we could have a Tesla where most would say there has been no degradation at all armed with data showing they have a range of 103% of new or something crazy like that but whether you have so much range, a few miles here or there simply don't matter or it gets lost in the humongous battery pack, it is there.

But that would not really make sense or be realistic.  So maybe its time to look at Hx which I have been unable to get over 100% (like why is that even possible?)  for nearly 2 weeks despite doing "all the right stuff" but lets face it; we all know that quick charging and deep cycling the pack several days in a row does not make the pack stronger.  It more likely simply recalibrates the BMS making it more accurate. So you aren't gaining anything, only seeing what you already had.

I do choose my ahr reading which I have always preferred the most after GIDs but we all kinda have a fondness for GIDs simply because its not a Nissan thing, its a EV synergetic community thing.  But it is no longer at 82.34 ahr and unlike the last two times the metric dipped (due to extended rest periods) this time, it is not likely to come back.  In fact, despite driving 60 to 140 miles a day, it has slowly dropped every day. Its now wallowing in the mid 81's.

So the real question becomes what is my level of degradation really?  Ahr say just over 1% which is not likely. Remember, I have baked my pack into the red maybe 10 times, but hit 9 or 10 temperature bars DOZENS of times.  So 1%? Not likely.

Hx says 3 % (well not quite yet but guessing it will by tomorrow morning) So that might be more plausible but problem with both ahr and Hx is volatility.  Unlike SOH and GIDs that move rather slowly and somewhat predictably,  they are the two numbers that move the most making it difficult to determine exactly where they really are.  I can move them both down 3-4% quite easily by simply taking a 3 day weekend at home on the couch! This was possible back when my pack was still new (and likely undegraded!) so wonder how it far it would drop now if I did it?  Remember, I did the experiment with my LEAF driving it infrequently during the first month of Leasorship. I was able to get the Hx to pretty much where its at now but also had the ahr move to 81.49 ahr on November 29th, 2016. (My delivery date... why do we call it that? I had to go get it, so my "pickup date" was 11/11/16) 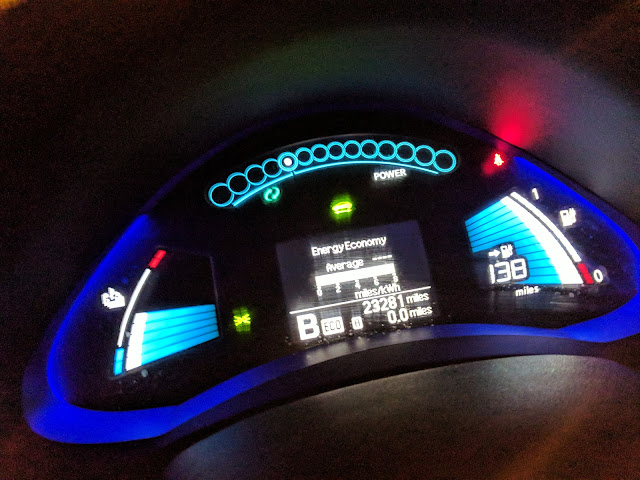 Now, I can't really go by remaining range due to too many variables with trips in my area.  I didn't do a real range test back when the LEAF was new other than random observations. Just didn't see the point. It was all about what I could do now that I couldn't do before and in the grand scheme of things, that is the only thing that counts. Now, my 24 kwh LEAF I could do casual range tests easily because one common work destination was 95.8 miles round trip (you don't have to drive it until it dies. That is lunacy anyway. You only need to drive to the point that the error in estimating your remaining range is minimal which is easy to do if you are guessing 2-5 miles)

So for now, I will be going with the 3 % loss. This means I have just about one less kwh available (despite what LEAF Spy says and realize, it ain't LEAF Spy saying it. LEAF Spy is just the messenger and you know the policy about violence against your messenger!) or 3-4 miles less range. I might see range in the high 80's this Winter (had one really nasty day with range in low 90's but that was aggravated by having 4 in the car which really kicked up the defrost need and it wasn't even that cold!)

This brings me to another point in that my 24 kwh LEAF numbers seemed to move more in concert with each other.  Hx and SOH were rarely more than 1-2% apart (good pack balance!) so wondering why the numbers are starting to spread?  I have also noticed this with several other people where their numbers are all over the map including a few with more than 10% differences! Crazy stuff!

But  now I can start a trend line and yeah, its likely to be readjusted but at this pace I will end my lease with 95% Capacity!!!.... if I honor the terms I agreed to of driving it 45,000 miles that is. We'll have to address that later.

Now I thought about waiting another 3-4 days or at least until my ahr and Hx stopped dropping but it getting near the end of the month and I found that putting stuff in the monthly drive report never seems to get noticed plus I have some spare time right now (which is rare but should be more plentiful within the next 6 weeks or so as work winds down for the holidays)  but I may well be back next week in a panic when my LEAF shoots below 95% or something... or not!