Well, its officially the slow season at work so was expecting to cut my mileage on the LEAF but the first part of the month was busier than expected so that didn't happen to the degree I was hoping for. Another issue was too much time off. I could sit at home... or not. So it was 80+ miles one way to test drive a Bolt and over 100 miles round trip to see a Tesla Model 3 in the flesh. Both well worth the time btw!

I did manage to get the 2nd lowest monthly total (No, the lowest monthly total was not the month I picked it up despite being only 20 days long) so far at 1544.9 miles.   As usual, public charging kept my costs down but had a hit from SemaConnect for $20 on my card refill. So my cost for the month balloons to $31.12 or  2.01 cents per mile. Without the Sema charge, it would have been 7/10th of a cent that did include a small charge from Blink. (32 cents) 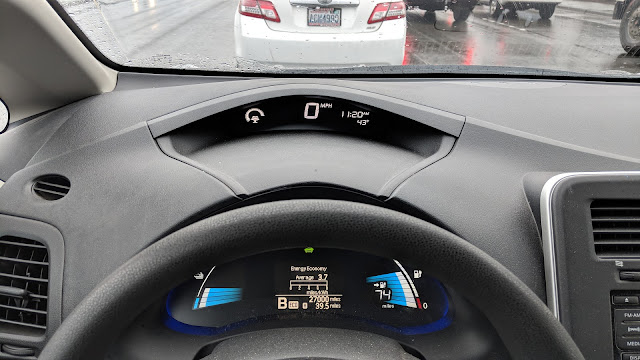 Another way of determining loss is simply changes in usability. This I have not really noticed.  As luck would have it, I took this pix and later realized it was a pretty good representation of where my pack is.  As always, I use climate controls only for defrost as needed relying solely on seat heaters to keep me warm. As you can see in this pix, its not that cold anyway.   Now as mentioned before; rain and snow on the road is the biggest range killer by far.  Cold weather has an impact but on dry streets, it not really that much.

Now this was taken on my way home from Puyallup and this would be as close to range test as I would do. I simply don't have the miles or motivation to drive on the course at steady speed, etc etc. Even that has too many variables.  But in my day to day meanderings around the sound, a lot of the trips are rather repeatable so a very small loss of range wouldn't be noticeable so much.  Unlike the 24 kwh LEAF, I don't have an easy range test. If you recall a common destination for me was Southcenter.  It was 96 miles round trip so a very good gauge for degradation since even when new, I would only have a handful of miles left.   Now I realize this is mostly GOM but if you look at miles driven along with the GOM estimate,  you are pretty much seeing what my average Winter range is.

The drive was somewhat normal. Early start meant driving there at speeds running from 60-72 mph with an average of probably 68 mph.  But the return trip was slower due to traffic, different routes (I use Google Maps and it selects the quickest which is almost never the shortest)  etc.  So the GOM estimate is actually high "if" I were to repeat my trip the same speed I came, etc.  It was raining pretty good both coming and going so that is a wash (close to wash out in some places!)

But to make a long story short, the range estimate adding the two together would be around 103-104.  Because of an additional 10 miles or so bombing around Olympia, I actually ended up with an estimate of 105 miles the only difference being that it was now 85 real miles with the GOM estimate. Because of the slower in town speeds, the real range would be likely to be in the 100-102 range.  If you recall, I guesstimated my range last year when the LEAF was new in Winter to be 92-105 miles depending mostly on how windy it was or how much water was on the road.

Obviously my range results are highly personal and not really translatable to anyone else's circumstances unless they live near here and is on the roads the same time I am.

On the dark side, the Corolla traveled 439.9 miles costing $30.79 (less than the LEAF!!...sort of ) or 7 cents per mile.  Assuming that its not a "skip gas Month" (Love those!) I generally fill up to get a much better idea of the cost of gas and this month was no different. Unfortunately, I picked the same day everyone else picked to get gas. 16 mins in and out... ick! 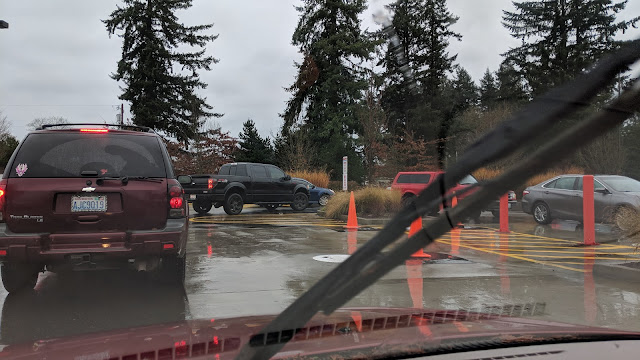 Costco Gas in Lacey WA. You would think with a HUGE number of pumps, the line
would never be this way? But that is not the case. Its always busy here but this was
a bit over the top!

Edit;  Have an expense to add. Ordered new wiper inserts for the LEAF. Got them, put them on and then 3 days later, I am cruising down the road near Nisqually (detouring to avoid traffic) and was zapped by a tree branch (well maybe not a branch but a big twig!) and it got stuck in the windshield wiper. The arm assembly survived but the blade did not.  The branch cut a couple notches in the blade before being thrown off the car so now the blade has a 3" section of glass nearly dead center of my driving view that does not really wipe.

Now I had had some doubts about the blades anyway. They were Trico's and nowhere near as heavy as the Nissan inserts I removed.  Well, I passed a few car parts stores on the way home and no one had any inserts available so I just put the old ones back on. In reality, the old ones still worked well (remember I scrub my windshield with steel wool maybe once a week or so and that helps a ton)  but it was time to change and I did it more out of habit than anything.

Anyway, I posted my situation online and as always, Social Media stepped up.  It seems that Nissan does not "officially" sell just the wiper inserts. They only sell the entire blade assembly which is $48 for the OEM parts from Japan or they have American part which is "just as good" according to the parts guy on the phone for $17.  So I was going to do the $17 thing when it was brought up that Honda sells inserts and one they sell just happens to be the exact right part.

So if you want to save a buck. Go to your local Honda dealer and ask for a

Cost? Well, some said as little as $5 but even it its $10, its still a significant savings and everyone who tried it said the wiper inserts worked very well!


EDIT
An MNL'er added that wiper blade replacements can be had for the LEAF by simply ordering parts from a different Nissan model.

If you want to keep your original windshield wipers and just replace the rubber inserts, here are the part numbers you need to order from Nissan. The passenger side refill is Nissan Part 28895-1AA1A, and the drivers side is 28895-1AA0A. These are the same as the ones on the Maxima and the Murano. These will fit all Leafs 2011 to 2015.

Now, I have a 2016 but not sure that even makes a difference.  Guessing it doesn't since the wiper sizes have not changed.
Posted by DaveinOlyWA at 7:46 AM