In June, 2008; California, Oregon and Washington came to an agreement to create the "West Coast Green Highway" that would provide alternative fuel options along I-5 to run from Canada to Mexico.   It was recognized that the I-5 corridor was one of the leading causes of pollution that was progressively getting worse making lower emission alternative transportation options a high priority.

The scope of the project was extended to include British Columbia, Canada and the West Coast Electric Highway was born.

In 2012, Aerovironment installed Fast Chargers along I-5 with the goal of making it possible for an EV like the Nissan LEAF to travel from Canada all the way to Mexico.  Oregon and Washington completed their legs rather quickly but California ran into obstacles which meant making the trip in a LEAF was not a "viable" one with the vision of the project.

But Washington's great start on the network of public charging was complicated by competing companies, jurisdictional restrictions and lack of continuous support. Also a lot of money was spent for level 2 charging that was and is underutilized in far too many areas.

But the few DCFCs installed by Aerovironment (AV) Blink and a handful of others did alleviate the strain on the stations installed at Nissan dealerships while Tesla showed us just how valuable a truly effective network could be.

Oregon used the West Coast Green Highway idea to electrify their coast along with the Columbia River Valley and the Central Oregon region. Being an EVer there was a dream! But I was only a visitor.   Don't get me wrong! Oregon is a beautiful state with a lot to see but so is Washington!

So, Thursday, August 2nd, I turned away from the coast and headed towards the passes of the Cascades to usher in the next/new chapter of the West Coast Electric Highway in Yakima, Washington!

As always, my car outlasted me in the "needs" department so I stopped at Snoqualmie for a break and grabbed a handful of electrons.  The line for the two bathrooms at Summit Deli was making me regret passing up on North Bend but at the time, my need was barely a twing and I still had 65% SOC!

In the end, all came out just fine and after 14 minutes and 8.372 kwh, I was on my way to my first "planned" stop of Ellensburg, WA.  Since it was only 145 miles from my house, it was quite reachable and charging there was key to the reason for going to Yakima which I will touch on soon.

As always, Ellensburg is a great location to charge because it has literally everything. So much to do and see and eat here.  If you are planning a trip thru the area and need a long charge, Ellensburg is the place!  This would be my 3rd time charging here and each time I have explored in different directions and so off I was headed South then East.   Since it was early a few local favorites weren't open (Most opened at 10:30 I noticed) so I got off easy with just a few donuts from ABC donuts which I discovered after walking well over a mile. (They were two blocks East of the station...) 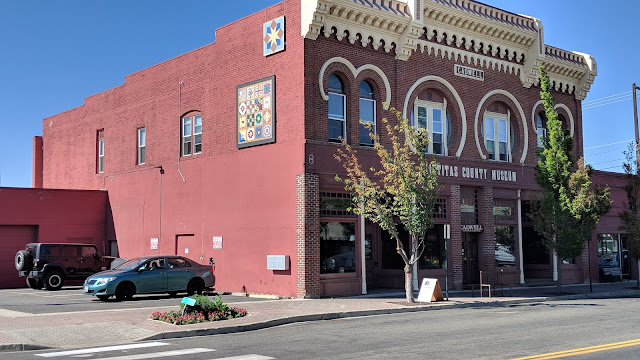 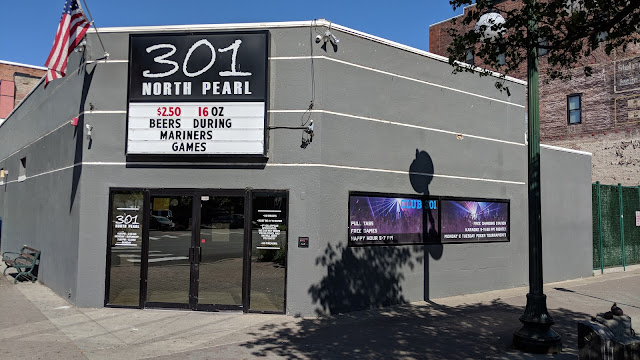 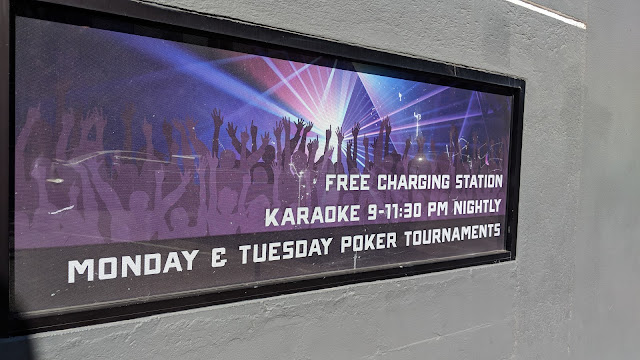 My kind of place!! But I didn't go in because I didn't want to be disappointed when the free charging would be for something inane like cell phones or something...

But finally it was on to Yakima. I unplugged after 53 minutes gaining 23.81 kwh  I elected to take Highway 821  following the river and I am glad I did.  Over a few million years, the river gouged the Yakima Valley creating a v-shaped path that would have been a perfect movie set for a flood disaster movie.  I had the river on my right and near vertical rock walls on my left.  It was beautiful in its barrenness, An awe inspiring result of the power of the Yakima River.  It is literally a 30 mile drive between the two DCFCs of Ellensburg and Yakima WITH NO TURNS! 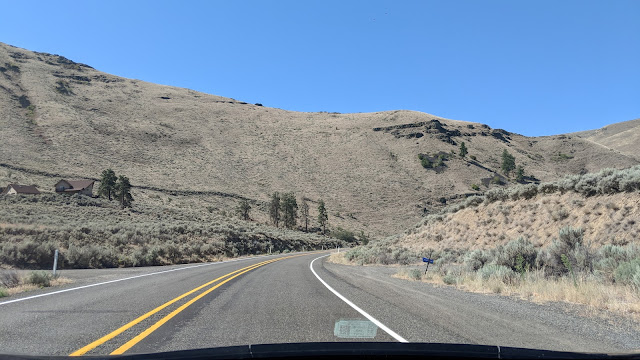 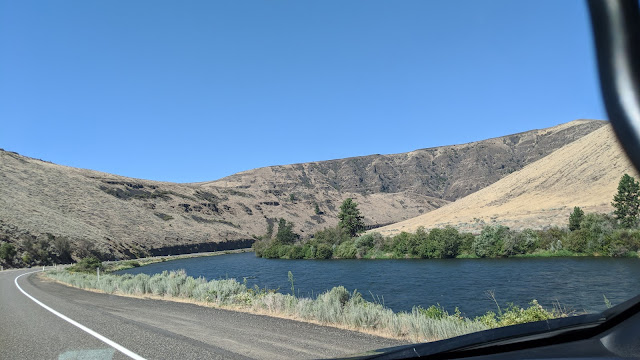 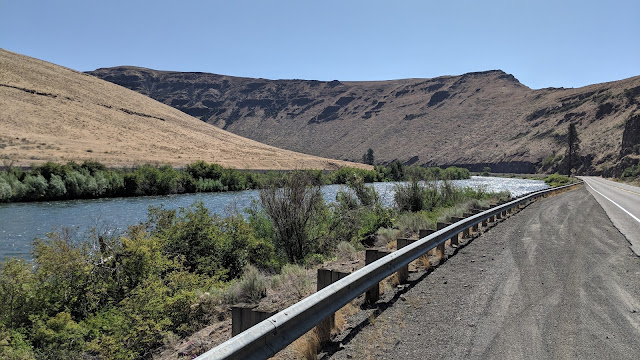 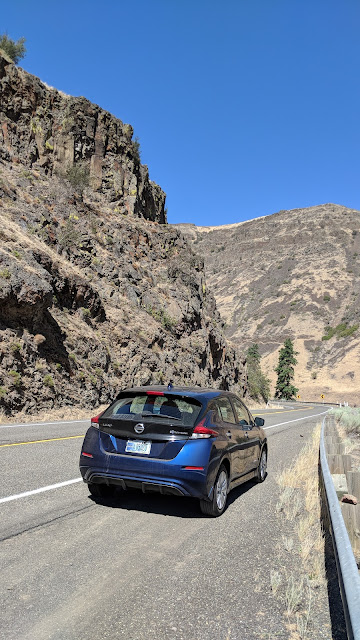 Just another stop the "car" didn't need to make... 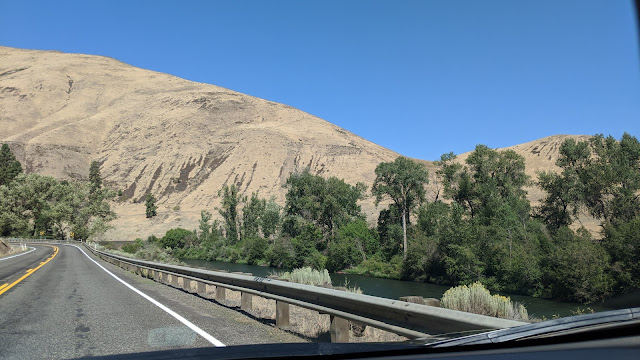 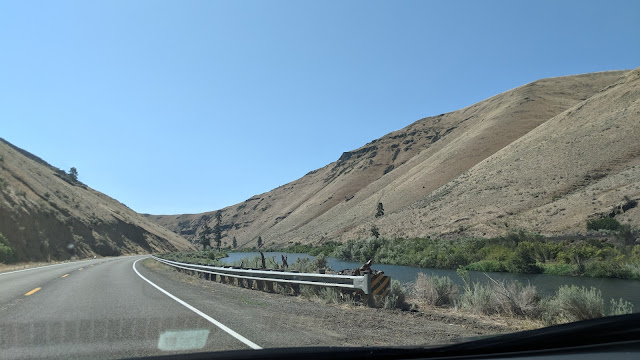 And if pix weren't enough, here is a video to check out! I do have more but this one is the only one that is short enough to post 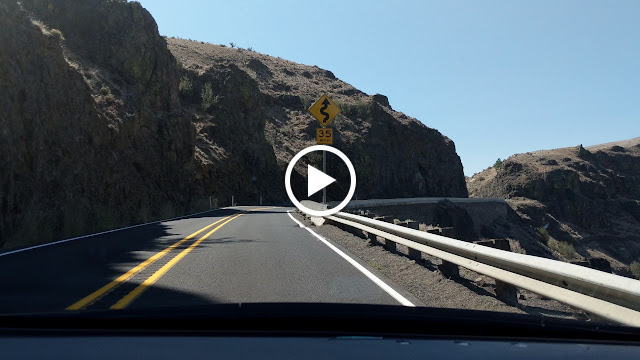 Sadly, the drive ended as I crested the top of the canyon and dropped down into Yakima but then again,  the Firing Range Chevron was the whole reason for the trip!

In case you don't recall, Washington decided to kick up the electric car tab fees to $150 from $100 and no, it was not a money grab. In fact, it was to benefit us!   The first million collected annually, $50 at a time would be set aside for funding the state's charging infrastructure.  Using a grant program stretched the State's dollars and gave vendors a financial boost to get started.  In 2017, several areas submitted proposals and 3 were funded to be completed this year.   EVITA in partnership with Energy Northwest (Electric Vehicle Infrastructure Transportation Association) was two of the three. Their project will add 9 dual format DCFC's in the South Central Washington region.  Yakima is the 3rd to open with Kennewick and Ellensburg already up and running.  EVITA will soon bring on Pasco, Connell, Richland, Prosser, Cle Elum and George making a trip to Spokane quite doable with SEVERAL EVs!  Cle Elum will include a very special surprise with a....ahh!!  Well, I guess it wouldn't be a surprise if I told you now! 😏 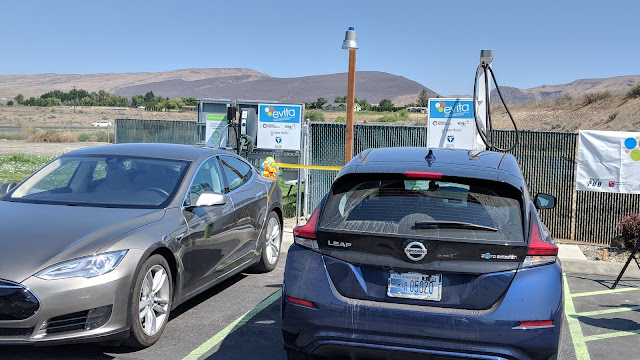 Juicing up with the big boys! For MNL fans, that is "Reddy" next to me!

Because its mostly downhill from Ellensburg, my 30 mile drive used about 10% of the pack so I did it mostly to get a Plugshare check in! but did get 6.25 kwh in 23 mins! 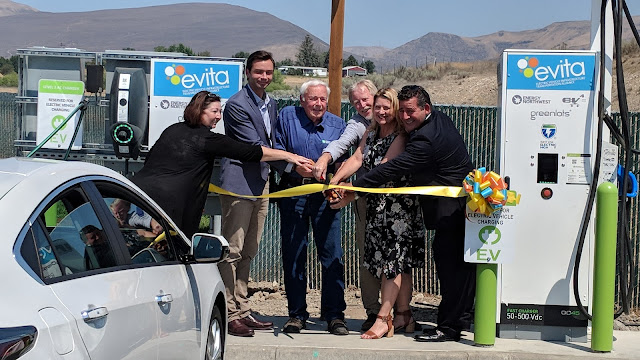 Many thanks to Sam Ali; owner and site host for his hospitality! Not only did he provide the site for the stations, he also provided free taco's and drinks (which was VERY nice since it was 95º!)  This is one of the better sites for travelers as it is at a main crossroads for the region.  A lot of charging stops adds 10-15 minutes to the trip just to detour off and back onto the route to the station. This one is literally seconds off the freeway.  The station boosts a large, clean, air conditioned dining area and for the VERY hungry... 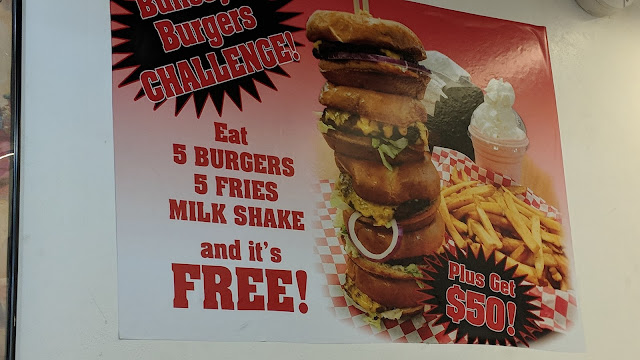 But it was time to go home but first I "had" to head East (Isn't that the wrong way??) to downtown Yakima to test some GE stations for compatibility and yes! They do work for the 2018 LEAF. So naturally after that strenuous test, refreshments were in order so a 2 block walk to the Pita Pit's neighbor Winegar's Homemade Ice Cream and Coffee Bar was in order!  When its hot (Realize Yakima is either very hot or very cold. They don't really do Spring or Fall) the espresso shakes are a GREAT choice!!. I ordered mine with 3 shots instead of the standard two and it was no extra charge! (I should have ordered 4...)

But it was time to head West to the clouds and I could have backtracked or simply head West! So West it was. I actually did have to backtrack 5 miles since we were now East of the Chevron. So off I went.  It was now 153 miles to hit the DCFC in Centralia but I was still at 96% so I decided to be conservative and drive slower... Ok, the real reason is I didn't want to pass by a good view pix!

Heading West on 82 to highway 12, the first order of business was climb! 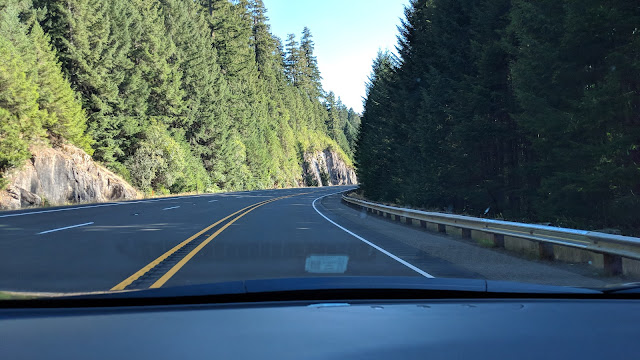 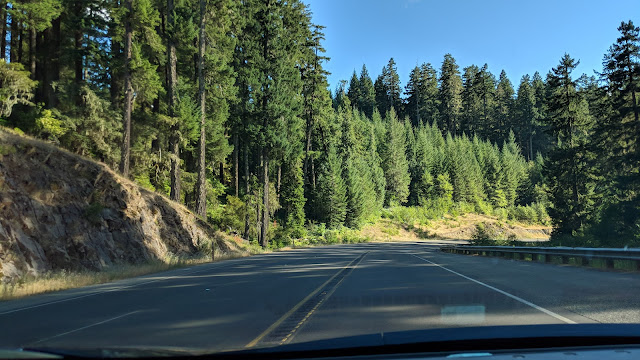 This would not mesh well with my range but I had my LEAF Spy phone sitting on the dash so couldn't see the GOM anyway so all was good!  But with the work, comes the reward! 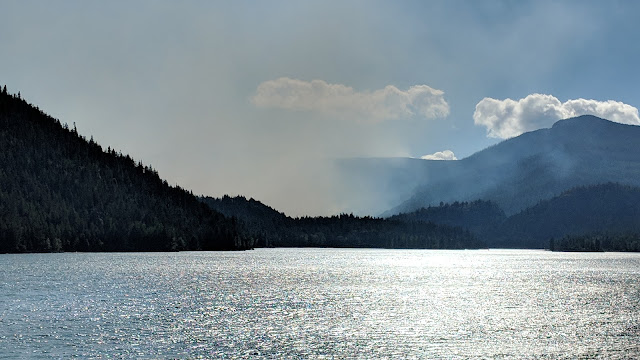 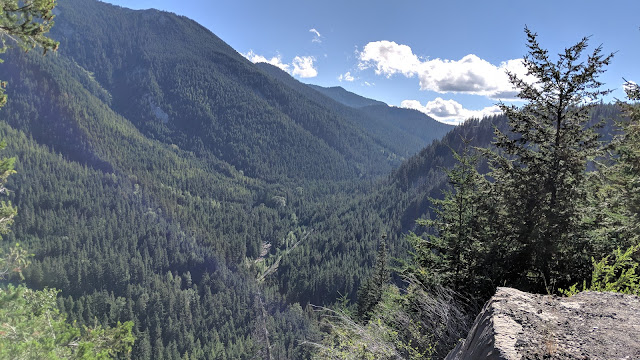 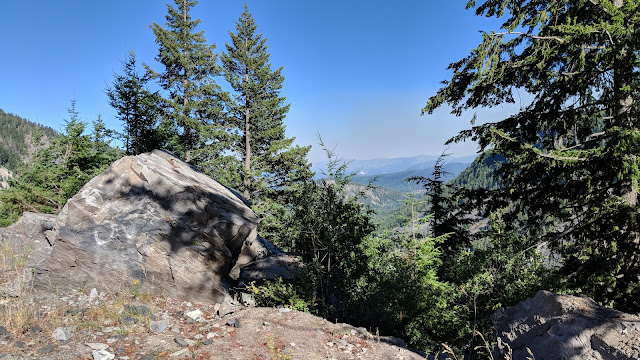 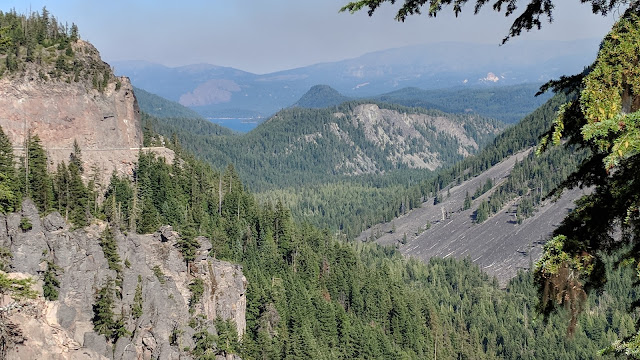 Tieton Dam on Rimrock Lake. Ok so "you" can't see the dam but I could! 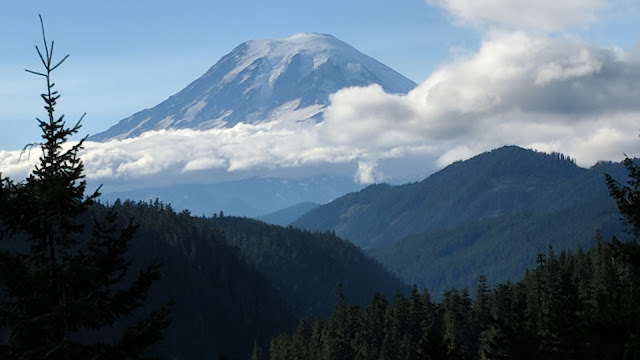 Mt. Rainer from White Pass. Even at 5,000 feet, she is still impressive! 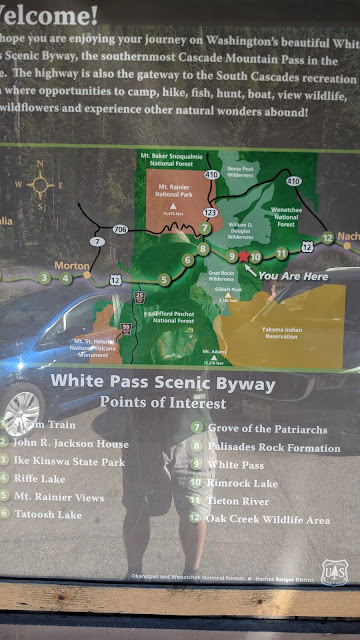 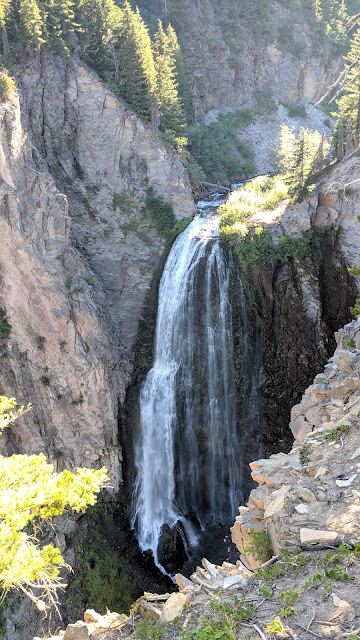 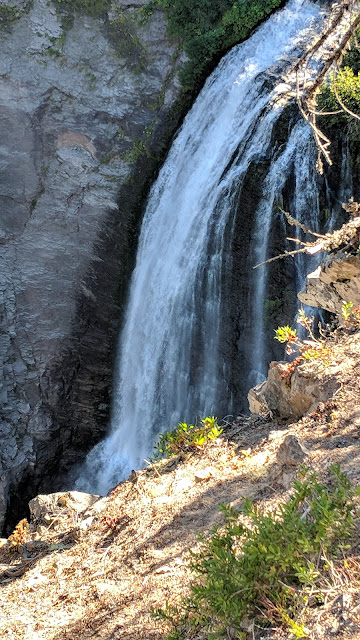 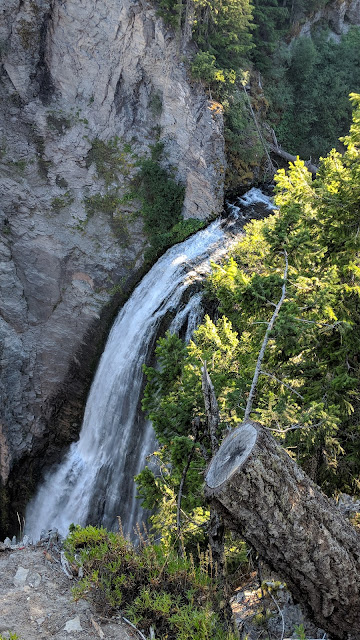 These pictures did not come close to capturing the majesty here.
Its hard to tell but I am hanging over a rail I had to walk a half mile to get to. The
bottom of the falls is probably 1500 feet below me.

I finally hit the DCFC at Centralia 153 miles and 65 mins later than estimated by Google so I am guessing my slower efficient driving combined with a "few" stops is the reason but have to say it was 65 minutes very well spent!!

Oh, that is right! I did mention that 3 projects were funded for this year, didn't I? Ok, well the 3rd partner is EV Forth and they are bolstering the I-5 corridor with 9 stations but they have been less forward with the locations but as we have known for a year, one is in Tacoma and will be online in less than a week.  For the others? Well, you might want to review site host possibilities *cough Walmart* for the other 8 possible locations 😇

It seems only fitting that Plugshare gets a plug! If you are a registered member (its free, takes a second) you will have received an email for a survey on new Plugshare features. Be heard! Be known! Let them know what you like, don't like and of course, please forward your Christmas list as well!
Posted by DaveinOlyWA at 9:22 AM