March is over, the weather is warming up and 5 miles per kwh is starting to reappear again which means driving season is nearly upon us!  For the month, I abused public charging for over 166 kwh reducing my home charging costs to $10... NOT!!! (It was actually $9.39...)  Since it wasn't January, April, July or October,  degradation was nearly non-existent! But... 😔 that is the reason this report is a bit late. More on that below.

On Saturday April 6th, I journeyed south to Milwaukie OR for the launch of Portland General Electric's (PGE) newest Electric Avenue location.  This is the 3rd location of 6 currently planned to open in the near future.  Milwaukie has 4 DCFCs with both CCS and Chademo along with a dual head level 2 outputting up to 30 amps.  The DCFCs are 50 KW and The Electric Avenue stations are priced at $3 for a 2 hour level 2 session,  $5 for a 2 hour DCFC session or you can opt for $25 monthly for unlimited.  Access is thru RFID card or the Greenlots mobile app. 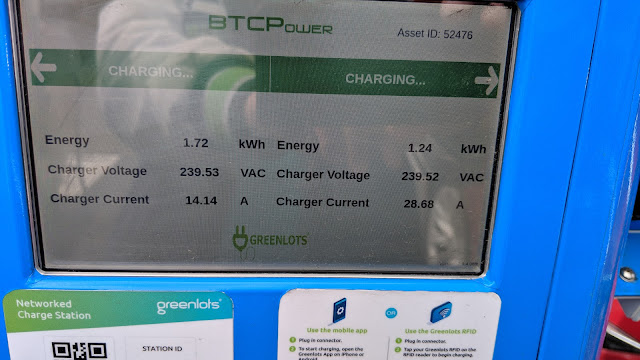 RAV plug in on the left, Tesla on the right! 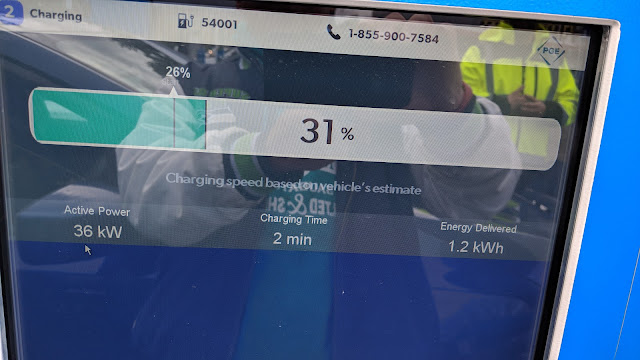 Normally you launch the Greenlots App, scan the QR code and the station is initialized. One QR code was scanning to a station at another location so that wasn't quite working but you can also type in the 5 digit station code as well.  The station was quick to react and took all of roughly 10 seconds for the charge to start.  My pack was roughly 105º so you can see RapidGate still flourishing unlike the Europeans who got a SW fix that greatly lessens the effect. 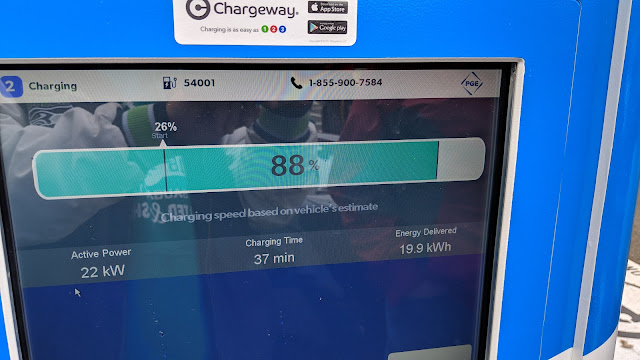 Despite the RapidGate issue, I still got what I needed in a decent amount of time.  Notice the 26%? That was my starting point. Very nice info to have! 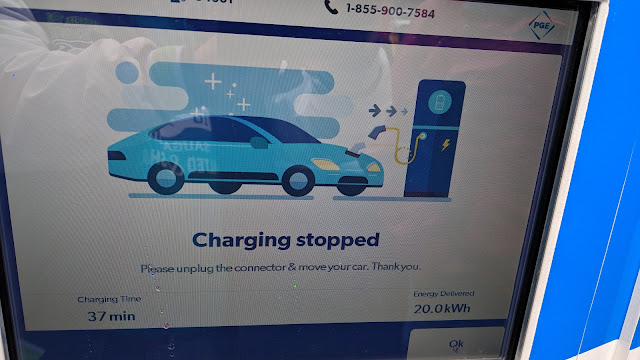 In talking with the PGE reps at the event, the initial planning will be 6 locations with Salem being the southern boundary.  The $25 unlimited monthly plan likely means every Uber driver in the area will be using these stations extensively.  With the PGE plan combined with the Webasto $20 a month unlimited plan, this becomes a HUGE financial advantage (see gas price comment below) when computing costs especially when claiming the standard federal mileage deduction.  Not hard to see why EVs are exploding with Uberites.

But for drive thrus and visitors to the area, $5 for a QC session up to 2 hours (most won't need that much time) means even a LEAFer suffering the full force of RapidGate will be able to get a charge to 90%.  Better yet, this allows a full meal stop.  Normally, the QCs I do don't allow a sit down meal. So its fast food or food to go. I am ok with that. I have had tons of jobs where time to eat was minimal (IF available) so it was eat it while you can so eating fast is something I do most of the time but there are those days where sitting down to taste the food while eating is a nice change of pace.   Bolts and newer LEAFs will be able to get a charge that rivals or even beats their home rates. A great deal for the EVer and hopefully won't be too abused by local residents.  Either way, when visiting the area, these stations are moving to the top of my list when my NCTC runs out in 10 months!

A company in Holland has live testing of range extender for the LEAF! We have a LEAFer testing a 17 kwh extender pack on his 24 kwh LEAF. Details are thin but looks like we may have a buyable product here soon.   Don't let the Holland location scare you. They are working on a DIY option for the US. If you want to get in line, do so here 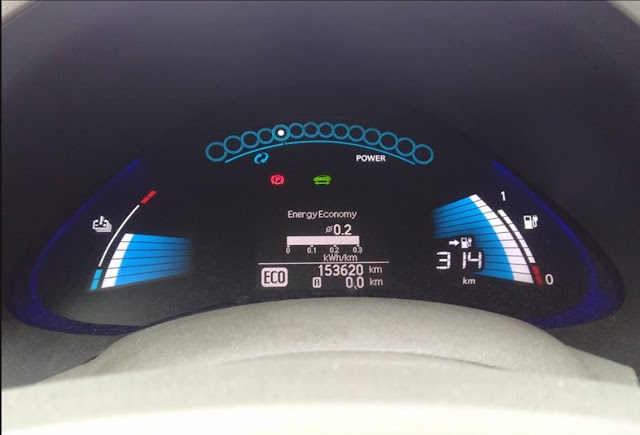 Not bad for a 9 bar LEAF, eh?
EA/EVGO
PGE is not the only one expanding our public charging choices.  EA is installing a 6 stall charging site at my local Walmart in Lacey less than 5 miles from my house. No idea when it will be live as some EA locations get built quickly then languish sometimes several months before getting turned on.  With their connect fees, high per minute rates and my 40 kwh RapidGate, they won't be used in anything other than an emergency for me but for Plus owners, it might not be too bad.  One reports the full 50 KW speed up to 89% SOC on his SL+.  That goes a long way towards getting decent additional range are a reasonable price. 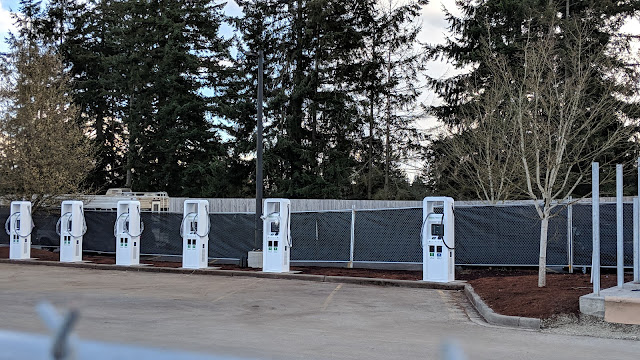 Walmart in Lacey, WA
EVGO is also on the move. As it always seems to be, I wanted to check out the new EVGO station in Bellingham but it was the same day as Milwaukie!  Don't it figure? Go all year with nothing to do then two things on the same day???  Must be DCFC season! 😄


Its A Bird! Its A Plane! NO!! Its The Price of Gasoline!

Rumor has it, the price of gas is skyrocketing and may hit $4 around here before tapering off shortly after Memorial Day. I have to admit, I drive by gas stations all the time but simply don't notice what gas is selling for.  This comes as a bit of a shock as back in my Prius days, I literally tracked the price of gas everywhere I went in my quest for that elusive 5 cents per mile.  I think back on those days and its hard for me to understand what the fuss was about? 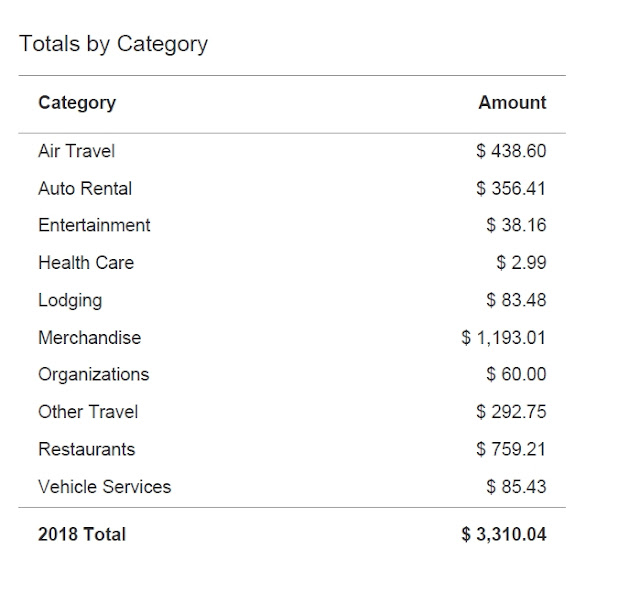 Costco CC Year End Summary
Last year, I spent $85.43 on vehicle services which means gasoline. I guess it "could" mean other things concerning cars but I have several credit cards used for specific purposes so in this case, it would be gasoline only. I did have my gasser until I got my 2018 and did give it away with a full tank of gas and I was forced to drive it for part of the 4 week delay between the death of my S30 and the arrival of my S40.  But the bulk of the cost was during vacation when I drove from Michigan to SW Ohio to visit my Son, Devin.  But this summary got me thinking so I looked back on previous years and found that even when I was part of a two Prius (and my ZENN) household, we were at or over $1,000 a year in gasoline.

Its kind of shocking I don't miss those days at all.  😏
Degradation On A Schedule
Its been nearly 90 days and I made a prediction privately to a handful of people and publicly in my blog,  that my "adjustment" was due.   Every 90ish days since my pack's conception (pack initialization, not delivery date) I have seen a rapid drop of SOH.   I purposely held off on the month's report to see it would happen and it did.  Remember the drop 90ish days ago last from Jan 8-14? Normally, the drop happens in a few days but my guess is light driving might have drawn out the adjustment, maybe?
Soooo... Starting April 8th to this morning, my SOH has dropped from 92.90% to 92.05% just as expected.  Unlike the previous 90 days (which saw the largest drop) mentioned above (which had nearly no fast charging and a highly managed SOC) I did go back to a slightly lower than normal (for me but probably higher for others) DCFC use so my reward?  I guess I have to say the drop, although still dramatic still was less than the previous 90 days.   For a reminder;

All this along with very similar numbers from other LEAF 40's from around the World is cultivating a growing doubt about the programming controlling the LBC (Lithium Battery Controller) and BMS.

Or maybe I have the degradation that is gradual and the BMS is only accurate after these adjustments?  Adding my 17,000 mile stats to the chart above bumps my extrapolated SOH (to 100,000 miles) to 60.1% but only because it misses the recent adjustment. Plugging in this morning's numbers drops my extrapolates SOH to 56.55%.  I am on pace to receive a replacement pack well before the 100,000 mile warranty period.  Makes the "dump it or trust it" decision at lease end time a bit more interesting.  I guess it's all about how well I will like driving a LEAF with 35% of its capacity missing while having to pay for nearly all my public charging. Makes me wish I could select which two years I get the free charging...
Posted by DaveinOlyWA at 8:51 AM