It was a short month so only went 1055.9 miles and this signifies the beginning of regular charging expense.  I home charged 44 kwh with power at 8.44 cents/kwh for a cost of $3.72.  I lost .09% SOH which was expected since my adjustment happened last month. Technically one day of the adjustment happened on February 1st but since March 1st saw no changes in SOH from February 29th, I did some creative accounting sliding the month over a day.  This accomplishes the feat of making February look better than it was along with making January worse than it actually was. Kinda like the Federal jobs report. 😎

For anyone getting a LEAF from November 1st, 2019 on, EVgo provides a $250 charging credit. Since my NCTC ran out February 16th, it was time to start using that perk. To get the best rate, I signed up for a monthly subscription thinking the $7.99 fee would be covered and it was not.  Right after I signed up, a $7.99 credit was applied to my account making the balance - $257.99.  A few weeks later, I received a notice that my CC was billed.   Well, I had planned to only use the EVgo credit while away from home since I had until Nov 16th to use it up.  But since $7.99 subscription fee wasn't part of the credit, it became financially wiser to use up the credit faster rather than slower since each month would increase my overall cost per kwh.

I had been tracking my charging performance and with EVgo's 25 cents per minute rate (Only 22 cents per minute after 8 PM), I was still averaging 32 to 33 cents per kwh despite not charging more than a minute or so past the knee.  IOW, I was getting the power for about as cheap as possible for the time of day and it still wasn't great.  Cheaper than Blink for sure along with others but nowhere near what EA was giving me when I was averaging 17 to 19 cents per kwh on their stations.

Now EA bills a $4 a month subscription rate but their higher charging speed along with their 18 cent per minute rates meant I only had to charge 57 minutes to overcome that $4 sub fee advantage EVgo provides (EVgo credits the first $7.99 of charging costs every month so the subscription fee is essentially zero'd out)

I happened upon a tech worker from the manufacturer of the DC station in DuPont and we got a chance to talk a bit about the issues both at DuPont and Chehalis.  Acheron had had a comm error message since Thanksgiving and apparently a part was ordered that was expected in two weeks which means by my reckoning, the station should be up and running this week. It is my plan to swing by there today sometime to check it out.   Chehalis had different issues and he was leaving DuPont to upgrade various components there. Apparently he had already been there several times to repair it.  I did verify it was working when returning from the Portland Auto Show a few weeks ago. Lets hope this station stays up for an extended period of time which would be the first time since it was turned on last year.

Edit; I just checked Acheron and he/she is still down. I also found a disturbing situation. 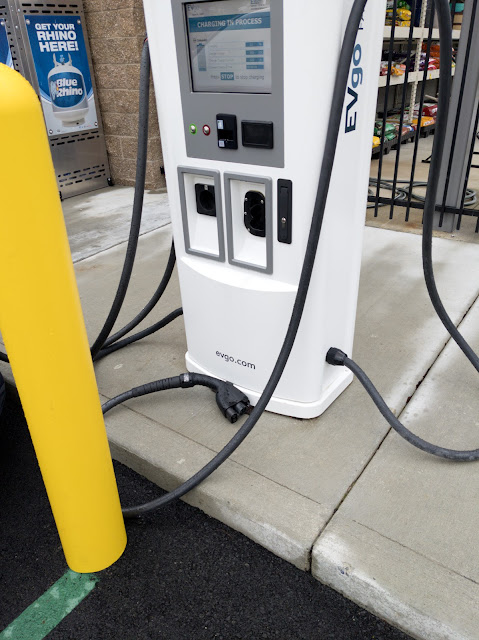 So, the stations have a proven track record of fragility and this is what we do?  Zoom in on the pix. Its raining, the handle is wet.  "Shouldn't" matter but a Bolter tried to use it and had 2 failed attempts.  I hope she knows that EA is only 8 miles down the road.

Electrify America is well into phase 2 of their 5 phase penalty and this phase promises a bit of redundancy, some connections to lesser traveled corridors, along with simply beefing up metro areas.  Despite their coming soon page, we have a surprise entry to announce.  Today someone alerted me to new stations in the ground at Target Plaza in West Olympia!

This came as a complete surprise and now makes me think I need to check out the Walmart in both Aberdeen and Shelton! Both would be VERY welcome locations to EVers vacationing on the Olympic Peninsula.  If anyone living in the area happens to notice something, let me know.

Believe it or not, Nissan has done a bit of an about face and is providing relief to LEAF owners with degraded packs in two ways;

The price of the 24 kwh pack which is no longer under warranty has been dropped to $5500 minus a required $1000 exchange credit.  This puts the cost at $4500 plus installation and in some cases (2011's and 12's) parts.  Remember in WA State; anything EV is still sales tax free and that does include parts AND labor.

30 kwh LEAF owners are the ones really making out...if they qualify for a warranty claim that is. Nissan is now replacing degraded 30 kwh packs with 40 kwh packs!  Like WOW!   This is not a rumor as 4 people have confirmed the higher capacity packs were installed.  BUT... Anyone with a 30  kwh LEAF who simply wants more range cannot buy the upgrade for anything less than a ridiculously exorbitant price!

What is even more confusing is that Nissan has NOT updated the parts price list for these  packs and a few dealerships were unaware of the new price until they actually went and ordered a pack to see the price come in at the $5500 cost instead of the $7,000 catalog listing.

One possible explanation is another rumor that Nissan is only offering the discounted price on the 24 kwh packs until the current supply is exhausted. This would explain why the catalog price was not changed or why the 40 kwh pack price is "seemingly" out of sync.  If this is the case, a $300 per kwh price point won't have many takers and that is a shame because...

Recently I celebrated a famous LEAF's 9th birthday with a drive! (build date 03/11 #1561)  It was amazing on several different levels.  For one thing; a year ago, this LEAF had a 35 mile range and 6 capacity bars. 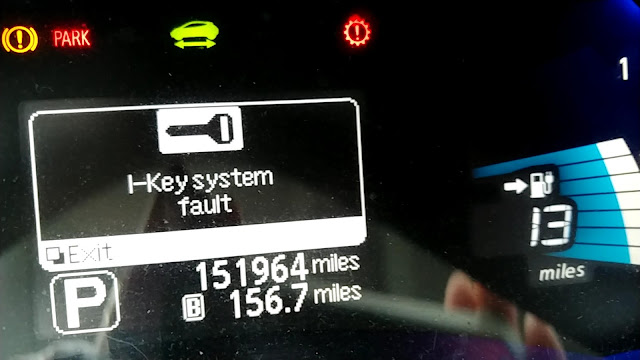 As I settled into the "very" light cream colored microfiber seats, I quickly wondered if I swapped seats with my E Plus, if they would notice?   I started the car and took off.  Despite the age, the miles, the degrada... oh wait.  Ignore that last comment.   Anyway, I marveled at how really nice the first LEAF was.  No rattles, no vibrations. Just the quite hum of the motor. I quickly realized that other than the motor sound which is all but gone in the E Plus; this car was in every way, nicer than mine.

Part of it was simply the owner. He really knew how to take care of cars and he might have amassed over a quarter MILLION miles on his two LEAFs, but I am still more awe struck at how long his tires lasted.  By now, this person is no longer a mystery to most of you and in a few days (sorry but have a gag order til Tuesday) , much more details on how this drive was even possible will be revealed.

Or Nissan instrumentation.  Remember LEAF Spy only parrots back what it reads, right?  Since I have more than tripled my level 2 charging this past month, I have noticed that Hx seems to go up when DC charging but goes down while AC charging?  What does that means? (not a rhetorical question!)

Since the super high Hx thing started with the 40 kwh packs, now wondering if its some sort of number that may indicate a score or evaluation of charging habits?   Since Nissan isn't really on board with LEAF Spy, they are not providing any kind of help to the developer and other than Hx is acting radically different since the 40 kwh packs, all we have is conjecture.

CARB Is In The House!

Well, actually the house just passed the bill which means WA will join California and others requiring all major auto manufacturers to provide us zero emission options (which means plugs!) in the near future. Unfortunately, after it becomes law, manufacturers have two years to comply so the wait is not over yet but the light at the end of the tunnel is on!
Posted by DaveinOlyWA at 4:18 PM