Now that most of the region was in phase 2, it was time for a range test. I could have just figured out a loop of the right length but there was no way my ass would survive nearly 4 hours in a car in one shot so decided that a goal was better so the plan was lunch in Portland and back to my home in Olympia. Round trip distance; 242 miles.  There is of course the Olympic Peninsula route but a pending EA site in Port Angeles means I might just have to wait for that site to open first. The other thing was I had already promised myself my next peninsula trip  would be with my Son camping... somewhere.

The route will be 90% freeway. I decided a Thursday would be best for minimal traffic. Heading down in mid morning, spending enough time in town and heading back mid afternoon, I would miss any rush hour traffic. Only real requirement. The destination has to be less than 3 miles off the freeway.

I used cruise control set to 65 mph and only needed to bump the speed in 1 mph increments up and down to account for traffic.  Over half the trip the speed limit was 70 with 60 in Olympia, Tumwater, Centralia/Chehalis and Vancouver/Kelso.

It should be well known that the dash info is not a good tool to use for a range test.  Recently someone did a range test in the Plus stopping at 1% SOC (maybe it was 2%)  to charge figuring that they had really "risked it for science" by going that far. It took me several minutes to recover from my uncontrollable bout of laughter which is why when anyone asks the best method to extend the range of the LEAF, my answer is "Get LEAF Spy."
LEAF Spy allows you to set your own miles/kwh.  So simply decide where you need to go, how far it is and then use LEAF Spy to find your target miles/kwh figure.  What I do is simply take off aiming for .1 mile/kwh over my target to see if I can reasonably hit it. This doesn't always work due to prevailing winds, terrain, etc.  but if its a goal that seems unreasonable, I start planning charging options while still over 80% SOC and 200 miles to play with.

So what I did is record the LEAF Spy SOC every time the GOM SOC ticked downwards.  I was able to capture each reading as the GOM updated except for 7 but at no time did I miss more than one reading (IOW, I caught 77%, missed 76% and caught 75%) I used the dictation program on my phone so it was simply a question of logging the data into a spreadsheet after I got home.

Now LEAF Spy only shows SOC in .1% increments but does not actually calculate it that way and there were a few times when LEAF Spy incremented a split second after the GOM so I took the lower reading in those cases.  This means a .1% variance is possible. 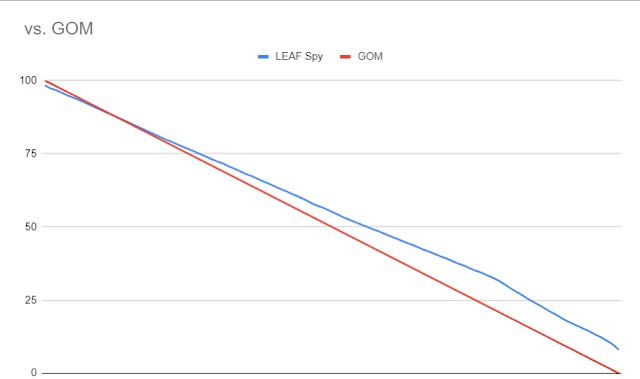 **The largest gap happened at 22 and 21% when the gap was 10.7%.  This a radical change from previous versions of the LEAF which includes the 40 kwh LEAF where the reserve continues to grow all the way to zero which means...

There are many scientific reasons why we should not charge beyond our needs. We all know full charges increase the rate of degradation but the ideology that 80% is a golden number is also wrong. You want to stay around 50% SOC as much as possible for longest life.  But I recently came across a LEAF Spy screenshot that I was convinced was altered or "something"

Has anyone ever seen anything like this? I was shocked when my 40 kwh pack charged to 99.3% It only did it once and 2nd highest was 98.54% The rest were in the 97% range. In an effort to see how high I could go I bumped my charge twice (unplug when charge is complete and plug in to restart) and got no more than 98.3% (poor top end balancing I guess?  This was only the 2nd time at 100% per dash. The first time was when I picked it up from the dealer)

But this "playing with fire" should be enough to make anyone nervous.  Just another reason why charging to full on a regular basis is a bad idea and should only be done when the need is that great and immediately after the charge is completed.  The reality is BMS/LBC programming is apparently still work in progress!

On my Winter Range test of sorts,  the end balancing of the pack too much longer than expected so I unplugged at 98% SOC. The car was only charging between 4 to 7 amps so wasn't missing a whole lot.  Well, the same thing happened here.  I get roughly 10% per hour of charge and the timer was set to start at 4 AM and add about 36% of charge.  At 8:30, I checked it expecting to be finished and it was still charging this time around 8 amps.  Ok, this was familiar. 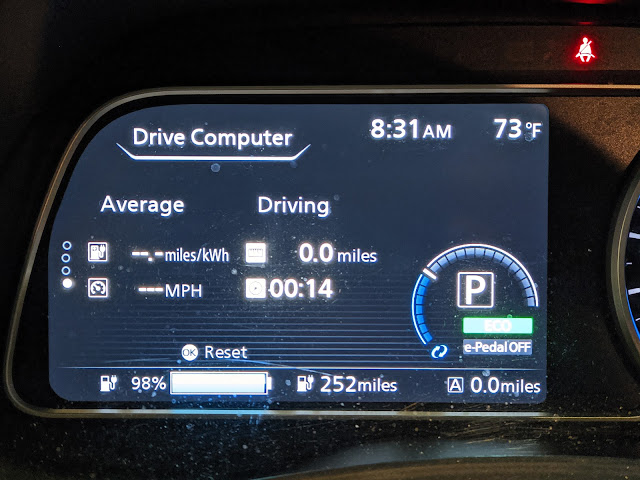 Notice the OAT of 73º? Garage was nowhere near that warm. Looks like thermometer is too close
to the inverter which does get warm during AC (doesn't heat up during DC charging) charging.

98% implies that there is still nearly 1.5 kwh to add. My meter which only shows one kwh increments did not change but its maximum  error could be 1.5 kwh so we will consider that if deciding to upgrade the meter some day.  BUT.... 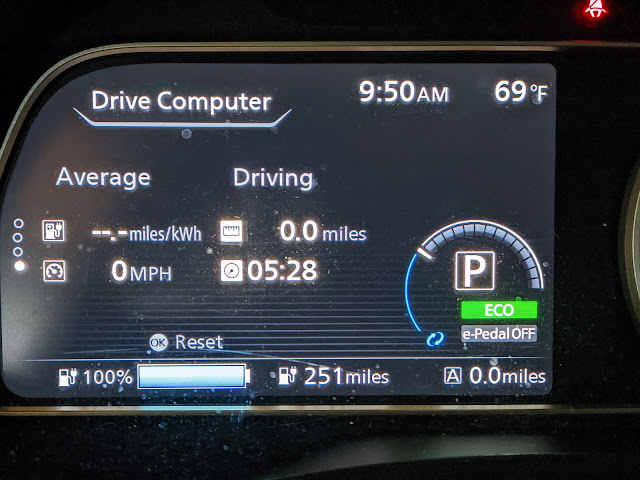 So after completing the charge AND bumping it twice, I am now at 100% SOC per the GOM and my range... has gone down.  Yeah well, its the GOM, right! 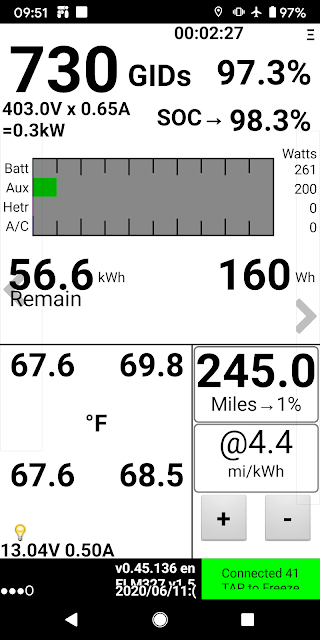 So everything was set...except for the weather. It was raining. The weather stated 40% chance of rain so it was kind of a coin flip.  Taking off, I decided to aim for downtown Vancouver instead which was a 15 mile shorter drive round trip.  The wet roads lasted until around Castle Rock, then we flipped to partially cloudy skies and by the time I got to Vancouver, the A/C was on. 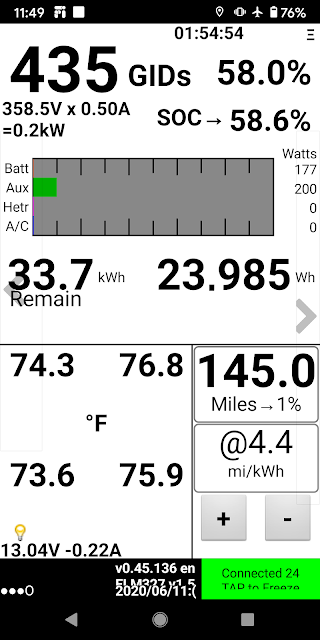 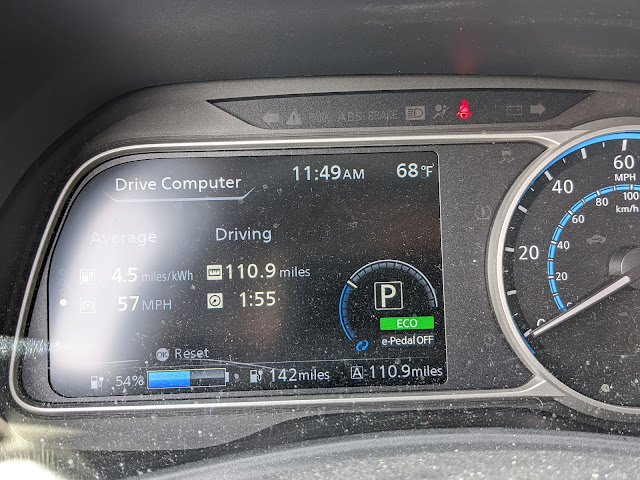 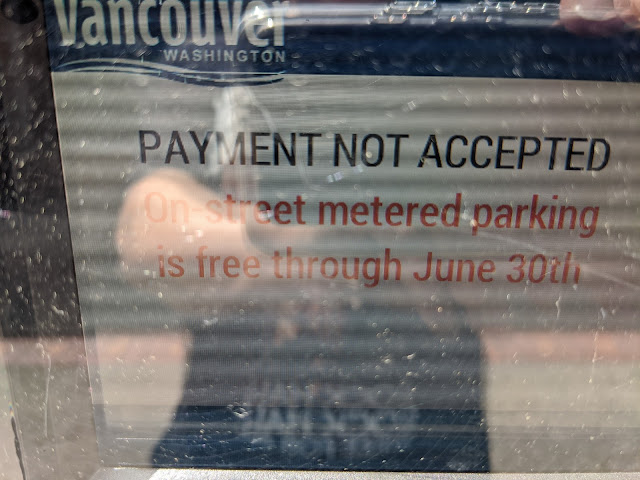 So Vancouver was turning out to be as good a decision as the weather! Using Yelp, I found a parking space that had at least a half dozen highly rated eateries within a few blocks.  I was literally 2 blocks down the street when I saw this 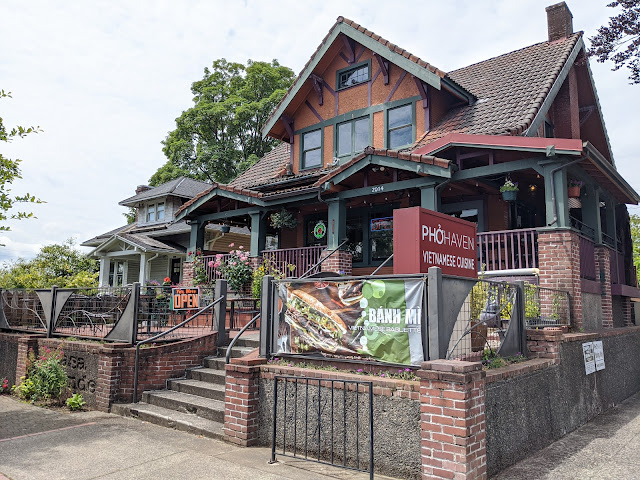 Outside dining on the covered porch was simply too good to pass up! But I elected to do the A/C inside and that turned out to be the right decision as it got very warm in the direct sun and after a large bowl of pho noodles, I was more than warmed up!

Another reason I selected Vancouver was due to a city park surrounding Lake Vancouver near by.  They had a lot of walking trails so after lunch I headed over there. 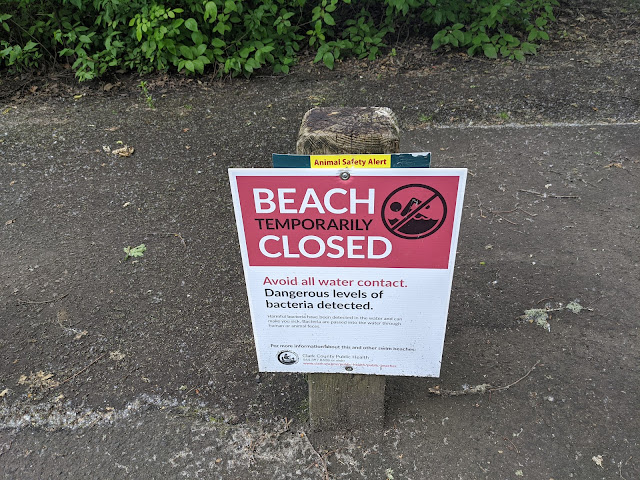 Obviously someone with COVID 19 had been swimming here! 😏

After a few miles of walking off the food (Got a sandwich as well!) It was time to head back. My plan was to get back to town before the afternoon rush started.  The drive home was uneventful and warm. A/C was on most of the trip. My A/C does not respond to the thermostat which means despite it being set to 84º, it gets a bit too cold sometimes.  So I toggle the compressor on and off. I guess its better than not cold enough. 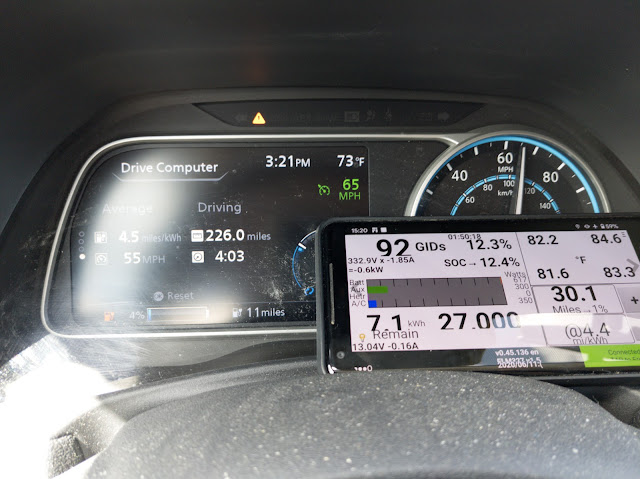 I got back to town a few miles later but couldn't stop since my SOC data was not complete so I wandered around town a bit, did make a few quick stops and finally 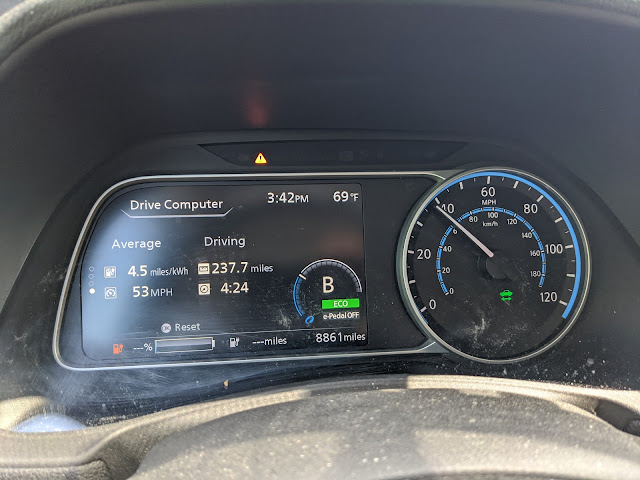 Zero % SOC on GOM achieved at 237.4 miles. Yeah, was slow taking picture but only because it too so long to change. Increment from 1% to zero was 1.8% SOC on LEAF Spy!

Why LEAF Spy Adds Range You Didn't Know You Had

Yeah well, we shall see. I decided to swing by the West Oly EA site to see if the cut cables had been replaced so that was a quick jaunt on the freeway there and back and then to the store and then home. Remember the 251 mile estimate on the GOM this morning?  Well, I have been bashing the GOM all day and well, lets face it; The job was not complete until... 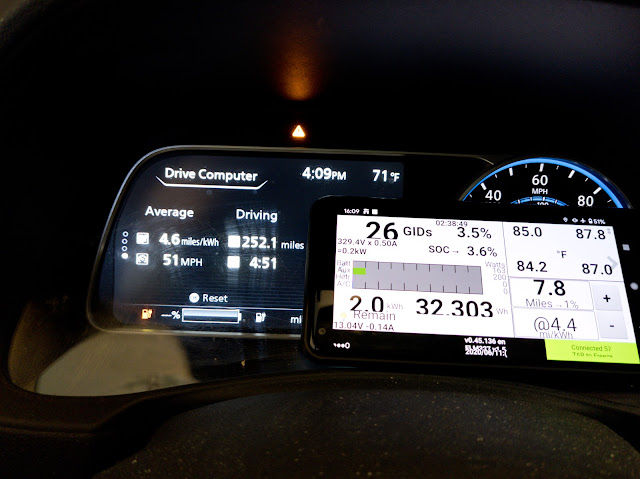 GOM exceeded and LEAF Spy says I still have enough for a MiSo run!

Posted by DaveinOlyWA at 8:13 AM