2021 promises a reset of the challenges faced in 2020 but the progress is slow. WA is still locked down for all social activities so its take out only, no sporting events, concerts, movies or much of anything else.  Although retail locations are restricted to 25% capacity, other than small (easy to track) shops in the malls, there is very little policing going on.  Each store does have people out front going thru the motions but I have only encountered one line at Costco (didn't go in) but other places like Safeway was packed and pretty sure they were well over the 25% limit but so far, no infections

As you can see; as of Wednesday the 7th (when I took the test) I am free to roam...with a mask of course. Since the test, I have only had close interaction with my Son who sees no one other than immediate family as he is still doing CFH (classes from home)  and a few different people I picked up food from and yes, I and they were wearing masks.

As far as when I will be able to take more advantage of my range, that remains to be seen. Restrictions were supposed to be "adjusted" on the 4th but were extended to the 11th and then an announcement by the governor is breaking up the state into regions where different levels of restrictions will apply. Due to paywall issues, I have no other information than that but its my hope by this time next week, I will be able to do something besides shuttling a few miles for food and groceries.

I will be getting the vaccine when its available and due to age and occupation, I will likely be in the first 3rd or so in WA? But still looks to be not before early to mid Spring, so that is a long way off not to mention the 30 day 2 shot process and the several days of immunity building before I am "relatively" safe.

December as expected saw me under 4 miles/kwh barely. I am actually surprised I came as close as I did due to my higher average speed on my commuting but guessing climate control experimentation played a small part but ended the month going 810.2 miles @ 3.96 miles/kwh costing $19.86 or 2.45 cents/mile. That is a slight drop from last month despite higher utility rates which I calculated at 12.21 cents/kwh. Due to the rate change in the middle of the month, a straightforward calculation would have been tedious so I split the taxes, etc. 50/50 although my tier one/ tier two usage was 600/450. All my EV charging was tier two.
For the year; entire fuel cost was $194 and change which included $42.10 in public charging fees, most of which happened when I was homeless. At 13,985 miles that works out to 1.39 cents per mile. I can live with that. Unfortunately the loss of NCTC likely means an estimated 240% increase in cost.

"Probably" should have waited another 2 weeks for my adjustment but as you can see (the black arrows) in the chart, the last one was hardly a thing and I am expecting more of the same. What the chart portrays is projected ahr/SOH @ 100,000 miles using current degradation trends from day one. Although I have date lines, this data points are logged every 1000 miles.
Now if we were to use only the trends of the recent past; .03% SOH the last 1k miles or .04% the previous 1K miles, I would hit 6 figures around 90% SOH. Unrealistic? Well, there are already 4 LEAFers over 100,000 miles and two of them are still over 90% SOH so yeah, its possible. Obviously they have a much lower level of time based degradation.

Here is the latest entry @ 16,003 miles and I guess we can say things are looking up

By miles
Notes; There are now 4 LEAFers (40 and 62 kwh) over 100,000 miles with no capacity bar loss including at least one still over 90% SOH.  Granted their timed based degradation will be less than mine, but so far things are looking good.  We are still searching for the first lost capacity bar. If you know of one, grab some pix and comment below!

Recently I discovered my Plus has gained a lot more climate control options.  Not sure my 40 kwh could do some of the stuff but I know my older LEAFs couldn't.

As we know, heat is the big range killer so using it sparingly is the easiest way to boost range on those longer drives. Here in the Pacific Northwest, the challenge is even greater due to the high humidity that comes hand in hand with lots of rain. So anyway, I am buzzing over to grab dinner and have defrost on and as usual, I am toggling the heat button on and off based on how much comfort I need and got stuck behind a smelly at the light. I immediately closed the vent but since it was pouring rain, I knew fogging would quickly become an issue so I left the A/C on. 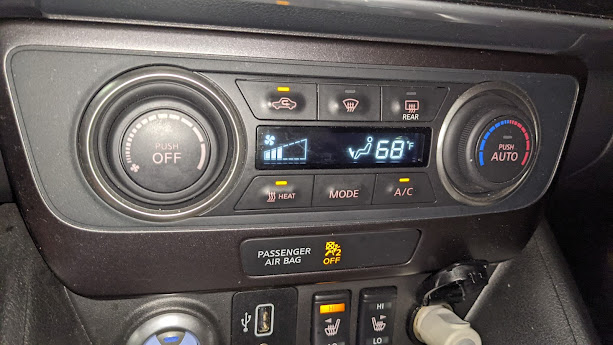 The light turned green, I proceeded to my destination and sat in the car waiting for my food to arrive. (carside delivery) The food came out after a 3 minute wait and off I went and that is when I realized the vent was still closed and until hot food was introduced,  the windshield stayed clear!  This was a shock!

So I decided that I would investigate further so the next day. I drove around this time with LEAF Spy running and results were pretty cool 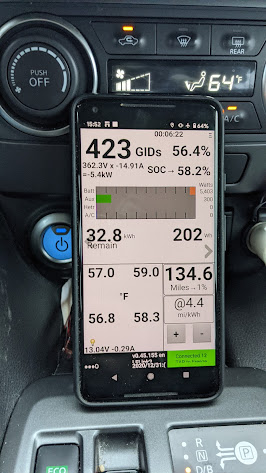 The phone covers it but I drove around all
day w/o heat. The day was mild so not an
issue!

Here there is no power draw but I did see power occasionally, so had to access LEAF Spy logs and saw power ranging from 200 to 350 watts briefly but mostly zeros.  On the chart below, the number you see is the power used in 50 watt increments. So 1 = 50 watts, 2 = 100 watts, etc.  Each reading happens roughly every 6 seconds 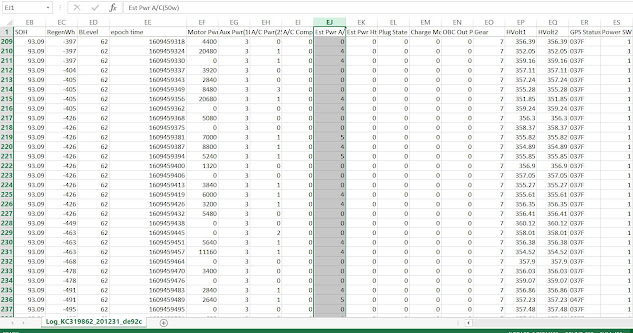 Now the weather was a lot drier than it was the previous night so unable to know how bad fogging would be but there would definitely some fogging normally as only the driest, sunniest days are fog free when the vents are closed. I did have light rain in the morning but it was mostly dry with sunbreaks in the afternoon.
Now there are caveats to this method. Although the A/C is not "technically" cooling the air, removing moisture will lower the temp of the air somewhat. I much prefer the closed vent option especially around town and found that blowing cold air on my feet was easier to tolerate than the face or windshield. It did irk me a bit as the front left vent on the dash leaks but I simply pointed it to the driver's window and that fixed it.
On milder days in the 50's, it was easy to never turn on the heat. I did toggle heat on/off on a roughly 30/70% cycle in colder weather in the 40's down to the upper 30's when the heat was on most of the time. I will be playing with much more but so far, very impressive results.

I can't even tell you how much it irritates me that my most hated public charging option is becoming so useful! As mentioned, the Olympic Peninsula Scenic Highway is a major challenge even for long range (200 mile plus) EVs due to no DC charging! Tesla has it covered but that is all.  Well, things have changed as EA has sited and will soon break ground on key locations in Aberdeen, (first convenient CCS/Chademo plug in Grays Harbor county!) Port Angeles, and Poulsbo, WA.  This makes the longest distance between DC chargers at no more than 164 miles which literally takes all the challenge away for me.  Even 40 kwh LEAFers can make it with a few short pit stops at one of free level 2's along the route and there is a LOT of places worthy of a visit! 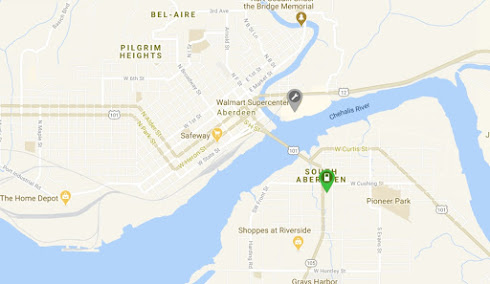 All will be located at Walmart.  To be fair, I should mention that Leavenworth, WA (our Bavarian mountainous, Christmasy town) another popular destination will also have an EA location but that area has several DC stations already but as we all know; on busy holidays, there is never enough plugs so the more the merrier!

We also have a state sponsored public charging rollout(most notably Highway 12 over White Pass) that EA is partially involved in (not sure how much the state has involved in these new EA locations) which means more stations coming.  I have requests for Forks and Shelton which will be very helpful as well.

But the convenience is "nearly" overridden by the crazy per kwh rates EA started last year. I suggest we all send our thoughts to EA about this. We live in one of the hottest EV adoption areas and we are paying THE highest rates for a charge. Something is not right here!