Its still early but things are not looking good.  I am losing hope that the forecasters have "over predicted" the impact of Hurricane Sandy.

Reports of hurricane force winds in a 175 mile radius makes this the largest hurricane to ever hit the United States. The satellite pictures are overwhelming. 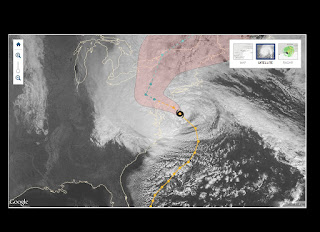 Once again, we have a weather event of epic proportions.  But that is how the World turns.  In my lifetime, I have heard of, seen or lived thru several of them and no matter how big, how fast, or how bad; there is always something bigger and badder around the corner.

But we used to get a few years respite between the really big events.  But lately "events" are coming in bunches. Its been barely a year since Irene. Now, I probably wouldnt consider Irene to be in the "100 Year" category today but wondering if I have simply become used to extreme weather events. It was devastating and very costly. It killed 65 people and caused over 16 Billion in damages and it was just a category 1 Storm but then again, so is Sandy, but the area and location is something not commonly seen.

In the Puget Sound Region, we went thru a record breaking heatwave in 2009 and this past Summer we went thru record breaking dry spells (along with the rest of the country) and normally its not all that newsworthy.  After all, what are records for if not to break them right?  But to break a rainfall record of a few inches to NOTHING and do it two months in a row is something we probably wont see again anytime soon. The last time we had anything close to weather that dry for that long was 1920...so guess it should be a "92 year" event.

Or is this our new normal?  The 14 "Billion Dollar Weather Events" in 2011 did set a record and part of that could simply be more people means more infrastructure means just more stuff lying around to get broken. Add to that, inflation and that could go a long way towards explaining that.

Now, the Pacific Northwest had a crippling snowstorm (in my front yard) this past January. Mind you, in an area where snow is not guaranteed every Winter, we got over 20 inches. It shutdown my town for 3 full days.  Some people in outlying areas had no power for over 3 weeks. It took 2 days to plow half the main roads and I live less than 5 miles from the state capitol.  Fact of the matter; the area was not prepared to handle something so far over what we normally see.  10 inches ok. Way more than we are used to but seen it before. That happens every 4-5 years. But more than 20? I have lived here since 1985 and the most snow I've seen at one time was like 12 inches. I have seen probably a half dozen Winters with no snow at all.

But its interesting how our seemingly insignificant effects of our habits have created havoc with the weather. Now we can argue that Mother Nature is a force far beyond our ability to affect its course and in a "one on one" basis; the arguments maybe correct but even the strongest castle will fall if the siege is carried out long enough.

We are all aware of the "1 degree rise in temperatures over the next XX years" stories. We have been inundated with them for a nearly a decade now.  But did they mention that the warmer air would hold more water so when we get these "water release" events that they would be MUCH worse?  Well, they probably mentioned it but I dont remember it.  They definitely did not emphasize it enough. Now they did mention that extreme weather events would be more extreme and I guess that was emphasized enough but we still didnt listen.

What we fought against and complained about the most was anything that might cause a dime rise in the price of gasoline because it would hurt too much. But in the meantime we were paying over $12 a gallon for bottled water because we no longer trust the public water supply.

Katrina was the most expensive storm in History (although I have to think most of that was due to the direct hit on a major population center that lies below sea level) at nearly 106 Billion but I think that the tally of Sandy will be much much worse.  It does not have the strength but at the same time; it looks to affect areas ill equipped to handle the effects of a hurricane only they "normally" only see every 100 years.

Posted by DaveinOlyWA at 1:02 PM