4 TB's and Regen. or "Heat Tolerance is only HALF the Battle!" 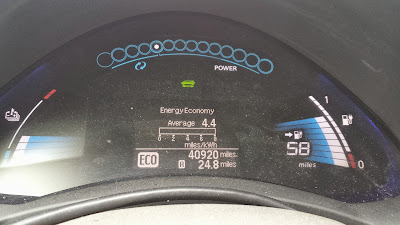 Starting with a picture is a new thing for this blog but this one does have at least a thousand words to say. For the newer LEAFers, we need to point out a few things along with some background info.

The two previous days I had charged overnight outside.  This allowed batt temps to drop until they were between 51 and 53ºF per the ELM.  I started from a full charge (235 GID) and trip meter was reset.  The picture shows 4 capacity bars used and nearly 25 miles driven (80% freeway @ 55 mph) and a temp rise of less than 2º (range of 52.4 to 54º.  FYI; normally batt temps drop on this early morning drive when batt temps are in the mid to upper 60's.  OAT varied from 43 to 52ºF)

Despite using more than one third of my capacity, full regen is still not available and probably due to the cold batt temps.  Another thing to note; it was very difficult to actually light up the 3rd regen circle. I could only get it lit very briefly. This is unusual in that I can normally (and quite easily) light up all circles available, especially the 4th one (farthest to the left) making me think that the 3rd one here is barely enabled.

The next morning was an earlier than normal one and car was garaged early in the day and door shut by 7 PM (normally open to as late as 10 or 11)  Charged finished before 1 AM and got 246 GID (highest reading since a 248 before the SW update) Batt temps were 65.6 to 68.9º. Departed at 3:15 AM and it was COLD! Climate controls used only enough to keep the windows clear. OAT was 35º per LEAF gauge.  To reduce interior fogging, I leave windows open on LEAF  but this only works if LEAF temp and OAT are close which they were not.  During the 4 mile drive to the freeway, I had both front windows down.  I rarely get cold during this because its fresh out of hot shower with very large cup of steaming coffee which would make me sweat in normal conditions. With a windbreaker on, I am actually very comfortable!

It was apparent early that my range would not be stellar and I dropped my speed to 50 mph after Nisqually Hill (about 5 miles on freeway) After a 9 hour day; I was on the way to an appointment so return speeds were between 55 and 58 mph but ended the day with a range estimated to be 72 miles to Turtle. This includes about 12 miles done at surface speeds of 25-40 mph.

Now hard to quantify the impact of climate controls on the day's drive and I guess I could dig out my Carwings password and at least get one number on the subject but guessing will have to wait a few days for Carwings to catch up so will edit with that info probably tomorrow.  But I only used defrost on a pulsing basis probably a dozen times for no more than a minute at a time so a small impact at best.  But does provide a decent picture of monthly driving (if you ignore the miles/kwh...) 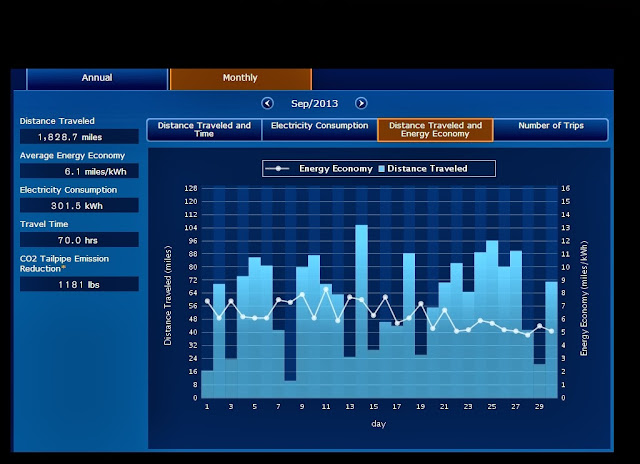 Now; you could look at this picture and surmise that I had 7 days off last month but keep in mind; I worked a single job in Olympia twice in September (actually worked in the Olympia area 4 times but the other two times there was other jobs to go to...)  FYI; my average energy economy taken from the daily Trip A resets was 4.5 miles/kwh

Either way, I am sidetracking (always happens when I look at Carwings. Must be the nagging feeling I am looking at something that does not relate to me at all!)  But the batteries Nissan is currently using suffers from permanent degradation in VERY moderate heat. Case in point;  A San Diego LEAFer only 22,000 miles on his LEAF. Normally charges to 80% rarely sees temps above the low 80's. Has only QC'd a few times and has NEVER seen TB #7. All this would seem to be the perfect conditions of a longer lasting pack, right?

Wrong! He posted his stats when he lost his first capacity bar on MNL.  In fact, it was his post that started me on this temperature experiment. I had originally kicked the idea of leaving the garage window open all Winter (ya, would be cold) but now seeing that would be a hit on my range.

So in conclusion; I have to put in a bit about TMS. Its apparent the LEAF's pack has little tolerance for temperature discomfort. It is very much human-like in its desire to be at room temperature.  So am I now a fan of TMS? Will I join the ranks of people saying "My next EV will have TMS or I aint buying it?"

Well, no. Was not a fan of TMS before and I am not now. The reasons are primarily financial and really no need to delve into that. We are all aware of the sales jump that happened when Nissan and Chevy cut prices.

But a story that happened very close to home (about 45 miles up the road as a matter of fact) of a Tesla catching fire and burning.  Now; is that a knock on EVs? No, not at all. The EV characteristic had no bearing whatsoever in the starting of the fire.  But like most car fires (about 2/3rds) the root cause was electrical and the fuel was a flammable fluid that WAS NOT gasoline.   Herein lies the weakness of all ICE vehicles and EV's with TMS.

The battery pack in all EVs are nearly bulletproof, just like a gas tank on the car. But like a gas car, its when that energy leaves the pack or the tank, it becomes vulnerable.  On my trip to Japan; TMS was discussed and it was made clear that the idea of liquid cooling system was not an option due to safety.  I thought this to be an overly cautious approach but now I cant help but wonder if the LEAF could have weathered a publicity nightmare such as this incident with Tesla as well as Tesla most likely will?


**Edit** too many requests for clarification of acronyms here sooo

TB= temperature bars which measure the heat in the battery pack. its the gauge on the leftTMS= temperature management system; which is used to control temperature of battery pack and something the LEAF does not haveELM; is a device that connects to CAN (computer automotive network or something like that which is a data port under steering wheel of ALL new cars) and transmits data via BT (bluetooth) to an android device. it displays a wealth of info about the LEAF.OAT= outside air temperature
Posted by DaveinOlyWA at 7:06 AM