A Billion Kilometers! Wow, what an achievement but that is only the beginning! Nissan is really starting to move away from the pack and recent revelations from the top promises to widen the gap.

hope everyone had a great Thanksgiving but its now time to fill out the Christmas Wishlist.

RANGE
Carlos Ghosn mentioned that much better batteries at a much cheaper price are just around the corner.  This is not surprising since the technology curve is always steepest in the beginning.  If press releases earlier this year are to be believed, then can we expect a 2017 LEAF with a 185 mile range in the low Thirties by Summer 2016?

That has been my hope which is part of the reason I did a 3 year lease a year ago.  Other than "stretching" the lease miles a bit, everything has worked out much better than I had hoped!

What I do have is the Mitsubishi MiEV with range that is too short and the Ford Focus without fast charging. Both are deal breakers for me. But Nissan's success will spur other car makers into action. I fully expect to have at least 3-4 cars to ponder over in two years. So Nissan; you have had a great start but no time to rest!!

EDUCATION Right now, the biggest drawback to EVs is still education. Thankfully, EVs have such a high owner satisfaction rating, word of mouth is helping in that area but even among owners, there is still a lot of misconceptions and features your EV may have that are not being used properly.

With Winter well under way, the major topic has been the range hit we have all been seeing.  Still tons of misinformation being passed about or simply info being relayed that many are simply misunderstanding.

An example is knowing how efficiently you drive. There is a miles/kwh meter I recommend resetting daily because its a gauge that can illustrate day to day differences you are not aware of.  I posted a pix in August of a commute where I averaged 5 miles per kilowatt-hour (kwh) and several were amazed stating they only drove at "3.8 in the Winter to 4.0 in the Summer."

Well that was an immediate red flag in this area.  The differences should have been much greater. Further questions revealed the person really had no clue how efficiently they drove because they were unaware that the number could be reset.  If that was all there was to it, then not really a big deal but a surprising number of LEAFers knew about it but didn't do it thinking it wasn't all that necessary.

That could not be further from the truth! Even routes repeated often like a work commute can have huge variances in performances in seemingly similar situations.  What it boils down to is a car that is highly efficient, any variance can greatly affect its performance.  I found that resetting my odometer and efficiency meter daily does give me great insight on my driving performance AND bragging rights! 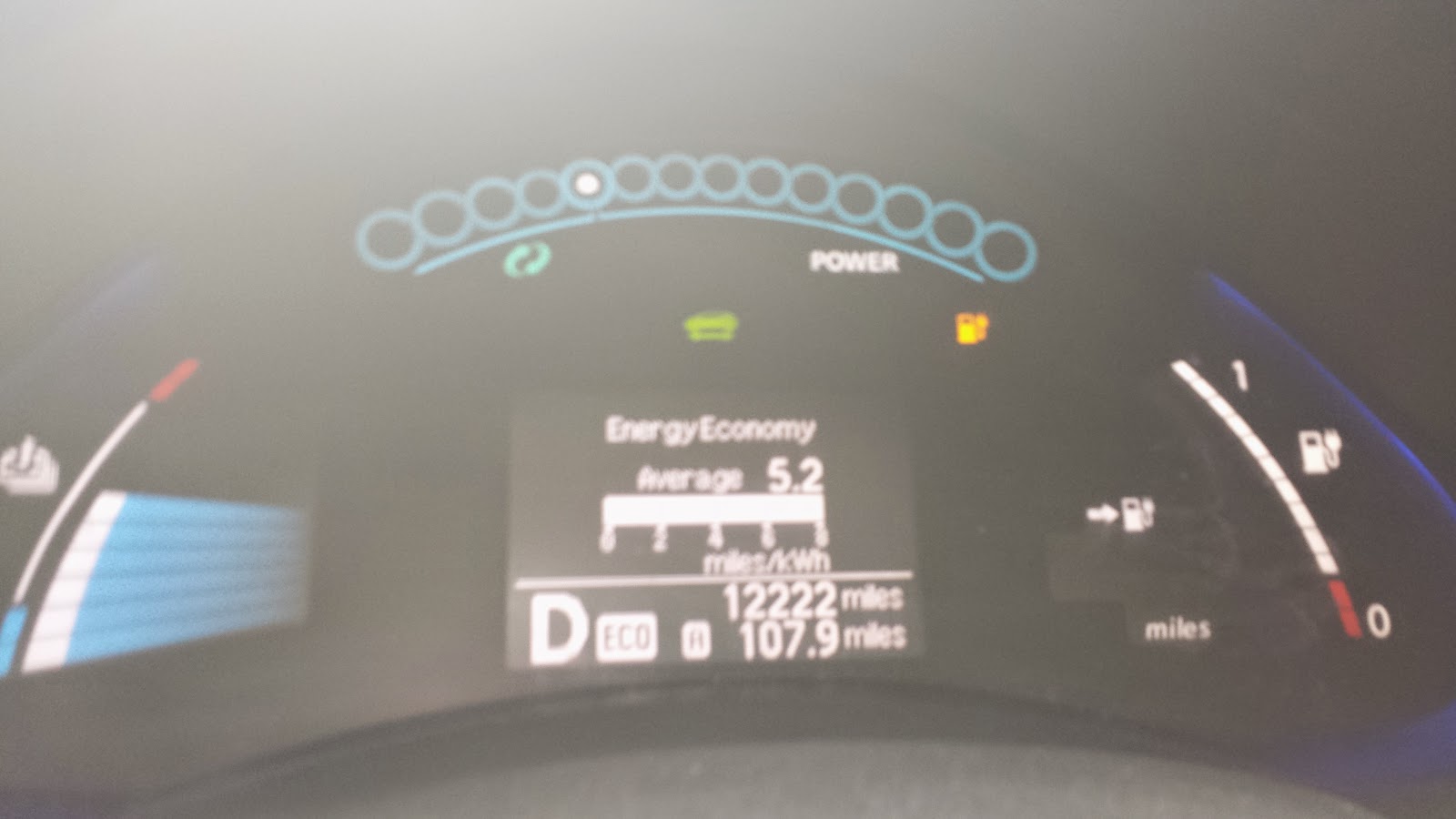 Another reason to do this is this also allows one a head's up to possible upcoming issues. A big drop in performance minus any obvious causes (track your weather! a change in wind direction will play havoc on your range!) is a red flag to investigate.  The other day, I started up my car to see my tire pressures ranging from 3940 PSI. I normally keep them at 44 but the cold weather reduced tire pressures a ton and the car's TPMS does not alert you until the pressures hit a ridiculously low number in the twenties!

AWARENESS  Nissan; its no longer a secret that you wish to corner the electric vehicle mainstream market. So, lets hear about it!!  Tell us what you are working on! What is your goal for 2016 or 2017? Give us something to look forward to!

SUPPORT Lets face it; other than Oregon (color me GREEN with envy) public infrastructure support has failed.  In a state that is one of the leaders in EV adoption, it really saddens me that I am experiencing some of the "best" we have to offer.  There has been some reports that more support is at least desired but I think the targets need to be changed.  As a 3rd time EVer, I am not likely to change my preferences the 4th time around, but many first timers are having a hard time adjusting.  More public charging does bring a great sense of security to EVers even if there are no plans to use the system.  Just knowing its there in case its needed goes a long long way.

Now this by no means means the chargers will lie unused. Too many times we are seeing this

This is the scene at the Burlington WA fast charger. What we have is one fast charger and 4 LEAFs waiting to use it. It is literally an oasis and in Winter it is a must stop. This needs to be changed.  There are too many holes in the infrastructure. The Washington Coast is pretty much been ignored. Grays Harbor County has ZERO public charging of any kind. Sure there are plugs for the imaginative. After all, its electricity and we pretty much all have it EVERYWHERE but I think its far past time the States take a lead role in this. One need look to the South to see how effective this can be in encouraging EV adoption!

But anyway, the stats for Nov, 2014 and FINALLY as promised, the LEAF has seen a reduced roll primarily due to very cold weather and lease mileage limitations.  But still managed to go 813.3 miles at at cost of $15.75 in electricity or just under 2 cents per mile. Work reimbursement was only $105 so with insurance added, it was a "break even" month.

The Corolla drove 954.7 miles using about $75.11 in gas on 3 fillups for the month costing 8 cents per mile.  The last fillup consisted of driving with temps primarily in the 20's but still managed 37.3 MPG which is pretty good considering one morning last week, I had to warm the car up about 10 mins because it took me that long to scrape ice and pry the trunk open due to a frozen latch.  That was no fun! (especially without gloves!)

Since I am just now hitting 17,000 miles with an anniversary date of Dec 23 and a lease limit of 15,000 miles per, I will continue to drive the Corolla for my longer commute options. The LEAF has been doing mostly the shorter errand type of things which helps to preserve my outstanding gas mileage.
Posted by DaveinOlyWA at 1:14 PM