Having logged over 90,000 EV miles, I am pretty aware of what my LEAF can and cannot do and yesterday was no different. I had a light morning workwise so had planned to charge after the 2 hour job just 10 miles away in Tumwater, WA.  But as luck would have it, a last minute change required me to get to the office and I had to do it before noon.

I had not charged the LEAF overnight because I try to avoid being at a high SOC if I am not needing that much and I figured I had plenty of time before my other job which was 20 miles away but did not start until 7:30 pm.  But I figured I had just enough to get to the office and almost all the way home.  Errands at the office took a bit longer than expected so I left there being roughly 3 miles short of what I needed to get home.  I then decided I would stop in DuPont for lunch at Happy Teriyaki while my car got a charge from the Blink stations at the hotel.  Because its a few blocks off the freeway, I have used these stations several times in the past.

I pulled in and swung around to the stations to see only one ICEer but there are 4 stations so I was good to go. As I parked, I immediately realized something was wrong. The stations did not look good. They looked neglected and sure enough, all 4 were DOA.  They appear to have been disconnected and abandoned.  Well, I was screwed... 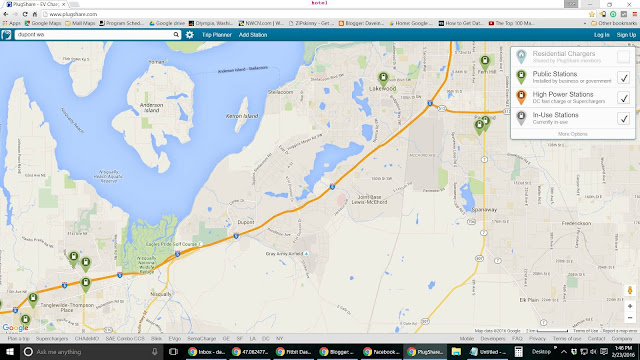 As you can see, Plugshare confirms DuPont is utterless plugless. The nearest station was the SemaConnect at Walgreens off exit 113. I was at exit 119 with roughly 3 miles of range left.  I had no choice but to hop back into the car and take off down the freeway.  It is almost all downhill from DuPont to the Nisqually Wildlife Refuge marked in green on the map. I got off the freeway at the Nisqually cutoff and first thought I would try to make it up the hill to Walgreens about 2 miles away at this point but as soon as I started up the hill, my power circles started disappearing.  I already knew my pack was not in good balance and it was showing. There is no way I should have been losing circles when I still had 6 GIDs!  I immediately slowed to 30 mph but to no avail. I went down to two power circles in the next ¼ mile and realized I would not have enough to get up the hill to a spot on the road wide enough to pull over so I did the unthinkable (for some but actually I have done this twice before on the same stretch of road) of making a u-turn over double yellow lines to coast back down the hill to the gas station.

Great... oh well, I called Roadside Assistance thinking it would be an all day affair getting my car to a plug. After a painful 14 minute conversation with customer service, a tow truck was sent out.  I received a text from the tow truck driver before we hung up. It stated about 90 minutes.... not unexpected.

But to my surprise, I had barely updated my status on Facebook when the driver pulled in 19 minutes after I received the text.  He laughed as he got out of his truck saying "A LEAF! I should have known!"

As it happens, this was his 4th stranded LEAF and talking to him really gave me some insight as to how valuable keeping a teeny tiny charge in the battery pack can be.  He had towed a young lady just a few weeks prior and her battery was so dead that he had to hook up a jump box to be able to boot the car up so he could put it in neutral.  Then after towing her to the charging station a few miles away, he was nice enough (lucky for her!) to hang around since it was very late at night by now to make sure she was ok and yeah, the battery was so dead, the LEAF would not recognize or take a charge. So he had to get the jumpbox out again to help her get the charge going.

I was very happy to have an experienced EV tow truck driver (less than a hour from the original call to plugging in in my garage) but at the same time a bit dismayed he had had so much practice lately.  But I had become careless in my EVness since I knew several charging companies had issues but until now, it had not affected me in a major way.  Its more than a bit shocking to me that after 5+ years that our public charging network seems to be regressing in the areas where its needed most. All I hear about is a new charger installed a few blocks away from and existing charger. Don't get me wrong; the more the merrier but it seems like we are not really making any headway as far developing a more effective network.

We still must navigate by leaps and bounds and this is not a good thing. Too many people complain as soon as someone hits 81% SOC without a hint of leaving but with these charging gaps, it is no longer easy to judge others for the time they take to charge. To address one's comfort level, maybe 90% or more is needed and its the thought that that possibility exists that we still have a lot of work to do.

**EDIT**  Lots of feedback on this post, both appreciated with a few "head scratchers"...

For the head scratchers; One thing to emphasize; I was not stranded due to limitations of the LEAF. I did mention that I passed dozens of viable charging options on the way to DuPont. So this is nothing about limited range, insufficient instrumentation, or poor planning.

When I mention DOA; I am talking about the current state of public charging in my area.  The LEAF is more than capable