Public Charging Effectiveness; There Has To Be A Better Way!

The Chevy Bolt trickled into existence last month (December.... This blog was started MANY weeks ago but I was derailed by several life things.  FYI; 98% of my blogs are conceptualized, written, and published in less than an hour...)  but that trickle promises to become a flood as the pent up demand for a 200 mile EV under $40,000 is unleashed to an unprepared public charging network already overburdened by Nissan's fire sale of the remaining 2016 LEAF stock.

Add to that, a half dozen promising new EV entrants for the first half of 2017 and I predict we will see a renewed "turf" war emerging between the 100% battery cars and the "half as.." I mean the plug in's over whose need is more important.  I have already seen a few Bolters who have done 2 consecutive 30 min fast charges!

But there is some light at the end of the tunnel. A new wave of announcements for new stations and partnerships to build, propose or encourage private businesses to invest in stations is addressing areas that have had little or no public support previously.

But there is still a basic realization that many providers have not come to grips with and that is how to allow multiple cars to access one charging station?   Too many times I will see 6 chargers occupying 6 consecutive parking spaces.  IOW; unless there is a space at either end of the row, you can't get better than a one to one ratio.

One hurdle is clear. It costs money to trench and install new power equipment especially when the power requirements are this robust so putting the stations adjacent to the power feed saves a ton of money.  This almost always means they will be located on the edge of the parking lot or against a wall which means access on one side only.  So this is a cost cutting move that makes sense.

But what about the process of bunching the stations all together?  How much more money does it cost run to spread the stations farther apart if they are all running parallel to the power feed?  Nearly every station now has a cable that is more than long enough that 3 LEAFs can easily reach one station.

Above we have the same six stations but instead of being able to charge or queue 6 to 8 cars,  we can now have 18 cars ready to roll, right!  In those rare cases when the stations can be put in the middle, we would have two rows of parking spaces meaning 36 cars can potentially access the 6 stations!

Well this would make the network much more effective but some states have ICEing laws where an EV parked in an EV charging space can be fined if not actively charging.  So this could be a problem... IF the law was actually being enforced.  In most cases, it is not. I am only aware of a handful of incidences at most where a ticket has been issued and all those instances likely only happened thru monumental efforts on another EVer's part.  IOW; if only relying on the diligence of the local constabulary, we be screwed!  So how to sort that out?  How can we tell if a car is waiting to charge or is simply wanting to park 25 feet closer to the entrance?

SemaConnect stations have LEDs  that provide status of the stations.  Blue means available, flashing Green means charging, Solid Green means charge complete, but more importantly Blue also means the car parked in the spot NEVER attempted to charge.  One thing that is impossible to know is whether someone who is plugged in, ever charged at all. What's to stop someone at another station from simply plugging in the car and not starting a session to avoid a ticket? or at least consternation from the EV community?

Obviously the ideal solution is each station having 3 cords allowing queuing between the 3 cars in question. This would not be cheap but would be cheaper than adding more stations.  This also opens up the possibility of upgrading the stations to higher outputs and possibly load sharing between the 3 vehicles.  Park and ride situations really need this. The bulk of the traffic in and out happens in the morning and afternoon with little action in between or even possible.  This means cars parked 9-10 hours.  Having 3 cars queued up can mean that all three could be at their desired charge level when owners return.


But bolstering the network will take time, money and motivation, all of which is in short supply. The other much easier idea is financial disincentives.  But parking fines as mentioned above has not been enforced for the most, can be tough to determine sometimes and simply creates too much hardship for some drivers in park and ride situations.  But one idea that is gaining traction is variable rate billing to encourage sharing and more turnover.

It has now been over two months since starting this blog entry and one thing is certain; EVs are gaining a lot of ground. Be it better range like the Bolt, versatility like the Volt or simply crazy discounts like the LEAF,  the battle for plugs will escalate and quickly.  We need to start moving on adding more plugs.

Finally; an interesting situation that I just have to share.  As we all know, fast chargers are the prime time destinations for people on the go. 80% in 30 mins just barely fits in most people's day so a slower option would be completely out of the question, right?...not always. 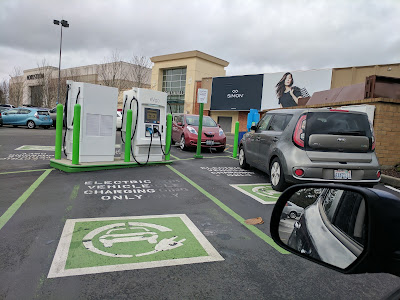 A few months ago, I reported that the L2's at Tacoma Mall were free. I observed people just pulling up and plugging in without scanning their cards.  So I was in need of a charge Friday (Yes, it was one of the 8 GID days!) so I pulled in with the idea of getting my free 30 minute fast charge courtesy of NCTC and then testing the free L2 on the way out.  Well, I got there and these two cars were plugged in and both drivers were in the car. I didn't think much of it. This is a common sight here.  I plugged into the DCFC and headed inside the mall to powerwalk for my usual 28 minutes. I returned and found the same two cars sitting there.  So my test of the free charging had to be put on hold because all the L2's were occupied while the fast chargers sat empty.  I have to say in 6+ years of publicly charging my LEAF, this was a first for me!

Posted by DaveinOlyWA at 9:23 AM