As mentioned MANY times in the 3 months I have had my S30, I have noticed the pack does not seem to retain the heat as much as my previous 24kwh LEAFs.  Now, it was a very warm Veteran's Day when I picked up the S30 but the weather has been pretty cold ever since. In fact, this Winter ranks as one of the coldest of this Century!

Anyway, me being cheap me (as usual) was avoiding home charging if I was even remotely going to be going by a free fast charger and the other day was no different.  But free was not to be! For one thing, it was very cold in the morning and I had a detour and defrost issues (I forgot my wiper. Took it inside to set over a heat register to dry it and forgot it!) so I basically had to stop at a Blink to gather enough juice before making it to the Tumwater AV so that was 44 cents down the drain!

So to put it mildly, I was in need when I got there. Unfortunately there was already someone there who was at 75% when I arrived but took another 28 mins before finishing.

So I plugged in and did random nothings and after 20 mins, I checked LEAF Spy to see how I was doing and pleased to see I was still over 40 KW charging (Ok, so I caught a temporary dip...) 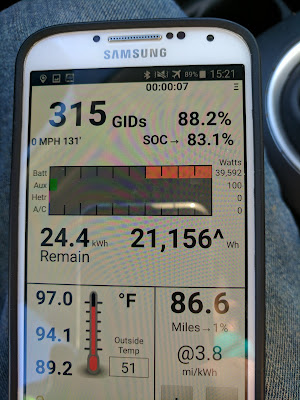 Either way, I only had about 30 miles or so for the day planned so decided at this point I would unplug when someone else arrived or when I dropped below 20 KW.

I then noticed I was at 7 TBs for the first time ever in this car.  The Sun was out so some solar radiation would be contributing but I was only in the 102ºish range so not too bad. A coolish Spring day in Phoenix really... :)

But the unthinkable happened.  The temperature started dropping! This was completely alien to everything I thought I knew about charging and TMSless LEAF battery packs! I was still charging over 20KW so how was this happening??

The Sun was still out so that wasn't it. I was so engrossed with what was happening I got a near full charge from the Chademo not unplugging until I was at 15 KW charging rate. The temps were still dropping now down to the mid 90's.  So I took off from the charger and about a minute later... I dropped to 6 TBs!

Final Stats (from LEAF Spy Log) GIDs 352,  charging speed; 14.7 KW.  SOC on dash would have been about 97%. I have to say, I am fairly confident I have never seen charging that fast at that high of an SOC! 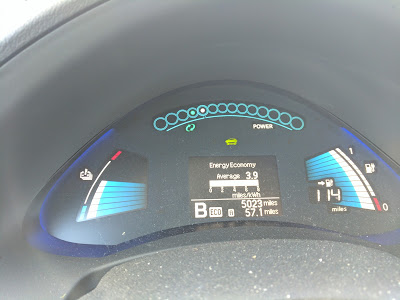 So again, very preliminary and despite a sunny day, the air temps were still in the mid 40's that day but still VERY interesting observations.

FYI; Tire rotation #1 in the books which means my new LEAF is "officially" no longer new...

**EDIT**
To clear up some confusion, I am in no way whatsoever implying that my LEAF has TMS. Notice the the title says "Temperature Management?"  TMS is used when manufacturers can't solve the problem.  Nissan chose to tackle the root cause instead. Have they found the answer?  Doubtful, but if the above can be repeated it would be obvious they are on the right path.
Posted by DaveinOlyWA at 10:39 AM