For those wondering; "TB" is LEAFspeak for the "Temperature Bars" gauge that indicates how glowing red your battery pack has become after that last fast charge.  As promised, I did make my LEAF road trip and it was quite frankly rather uneventful. No range anxiety at all.  On my last blog, I was mentioned a Bolter who was having issues making a 238 mile trip (I kid you not!) which just happened to be his EPA rated range but he was only making it 170 miles before having to stop and charge.  Granted, its Winter, rainy, cold, and all that range robbing stuff and this would be a non issue except that there is no CCS fast charge options on his route, a route that is lauded by many to be part of one of the best designed fast charge networks in the country. (Well, at least I think so) So when an opportunity to use that very same network came up, I simply could not pass it by.

My destination was Ilwaco, WA and I could have taken the route to the coast and down which would have been about 115 miles or take I-5 then across using the WCGH (West Coast Green Highway) that includes the Oregon extension to the coast.  It was a no brainer. It was longer at 243 miles but I literally had all day to complete two jobs with each job taking less than an hour so had plenty of time to drive!

Planning was easy.  I mean with a network like this, you really had to work hard to make it go wrong! I would only be skirting the OR/WA border but you get the idea! 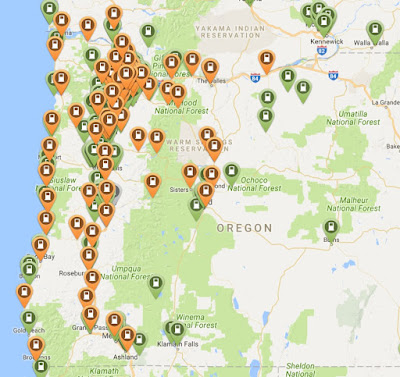 But smooth sailing took a hiccup almost immediately as my LEAF Spy phone failed to power up. Not sure why but looks like my Pixel XL will be doing double duty. A bit disappointing as I had hoped to have continuous logs for speed, etc. but that is not likely to happen now.  Damn phone is barely 5 years old. They just don't make em like they used to! 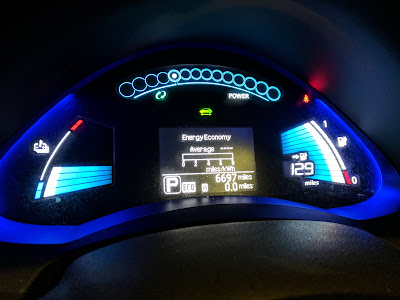 First order of business was a job in West Olympia near Capital Medical Center. Finished that around 9 AM so hit the road headed south on I-5 with 10 miles of my 300 mile trip completed.

Passed a few fast chargers and finally stopped in Castle Rock for a charge and some food from the Cascade Market Deli.  I could have skipped this station along with Tumwater and Centralia, but the deli simply wouldn't allow that! 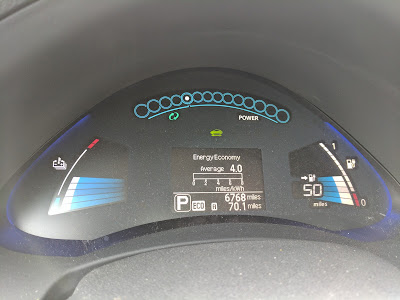 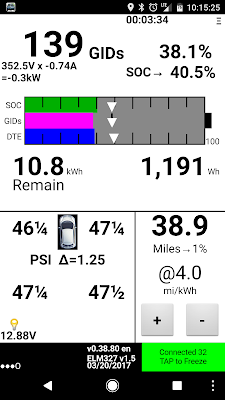 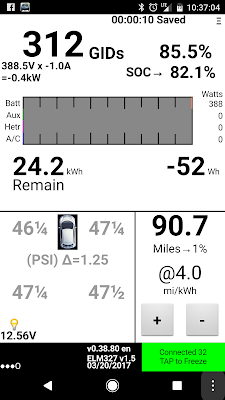 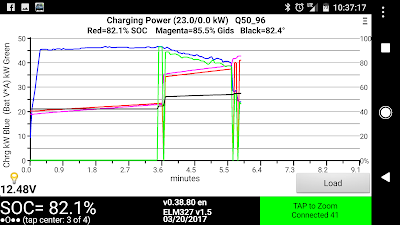 As you can see, the interruptions in the graph makes using one phone for both life and LEAF Spy something I could never understand.  From Day One, I have always used a 2nd phone and this is why!

Leaving Castle Rock stuffed (maybe I should have only gotten a ½ lb of Jos...) The weather was still sunny and dry but that ended less than 10 miles down the road.  At first the rain was pretty hard but then slowed to windy drizzle. As much as I could, I had cruise control set to 65 MPH which was easy on I-5 but that was only going to last a few more miles.

I crossed the Columbia on Highway 30 at Longview and began a series of hill climbing followed by hill coasting.  I know driving conservatively helps keep your batteries cooler but at the same time, on a single lane highway, the best opportunities to pass are when going uphill. During this stretch, my driving alternated between 8-10 power circle climbs and...oh wait?  I only have 8 power circles. Oh well maybe it was an 8 power circle climb wishing I had 10!...  The other side was coasting in neutral up to around 75 mph then slowing down with regen to about 60 or so and doing it again.  Now all this climbing didn't come without any benefits.  There were some pretty cool views. 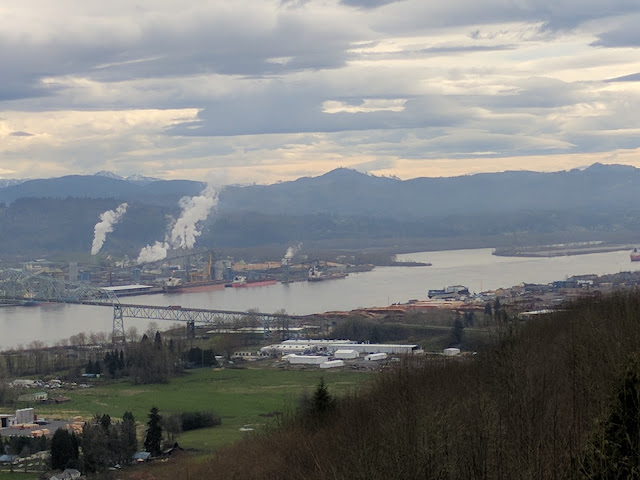 One thing for certain, my batteries were not going to cool down much driving like that but, it was kinda fun, so why not!   After about 65 miles, I stopped in Astoria to charge again and sure enough, the batt temps went up! 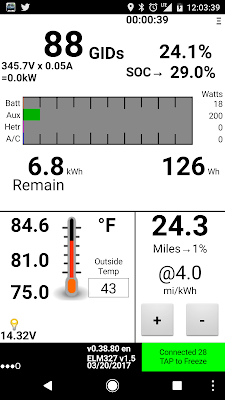 Here was simply too many things to see so I had to remind myself I was working, so 22 minutes, 16.37 kwh later and about 25 pix later, I was off to Ilwaco! 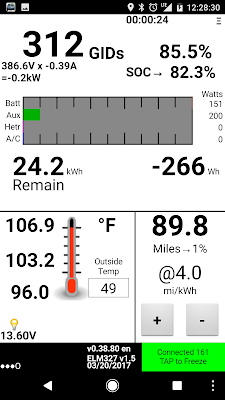 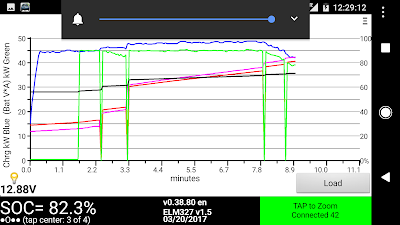 Batteries heating up now! Again the charge graph not very accurate
since I was using phone for pix taking. Actual charge time 22 mins.

Leaving Astoria and crossing over the Astoria-Megler Bridge that crosses over the outlet of the Columbia River to the Pacific Ocean. One big LOOOONG Bridge!  Ilwaco is a short 18 mile jaunt from Astoria and some very cool scenery.  I took a pix of the Bridge but you have to piece together two pix. I will tell you why in a sec.

Here is pix covering the first 1½ miles of the Bridge. 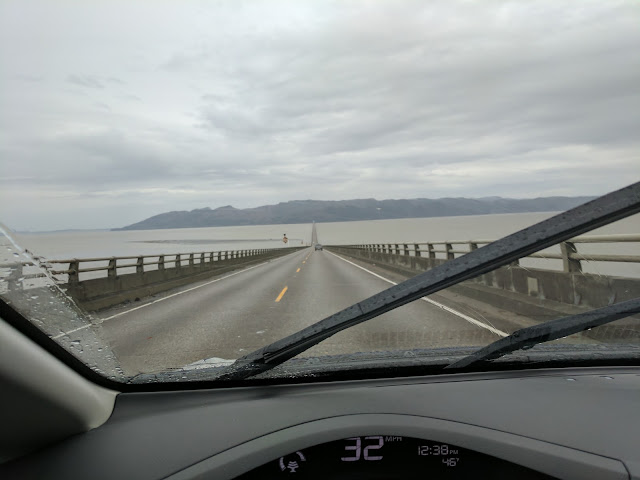 Here I am approximately where the first pix cuts off.
As you can see; I still really can't get it all in the pix

According to Wikipedia; It is the longest continuous truss bridge in North America. Well, I am convinced!

I arrived at the jobsite in Ilwaco and it literally took me 30 minutes to finish.  So now that I had extra time, I wanted to do some sightseeing but it was WIIINNNNDY!! and the rain wasn't helping either. 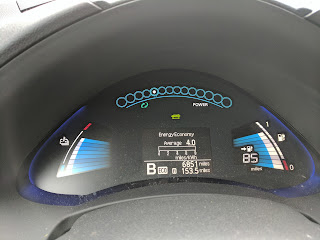 The following is filler so this post won't look too short. :) 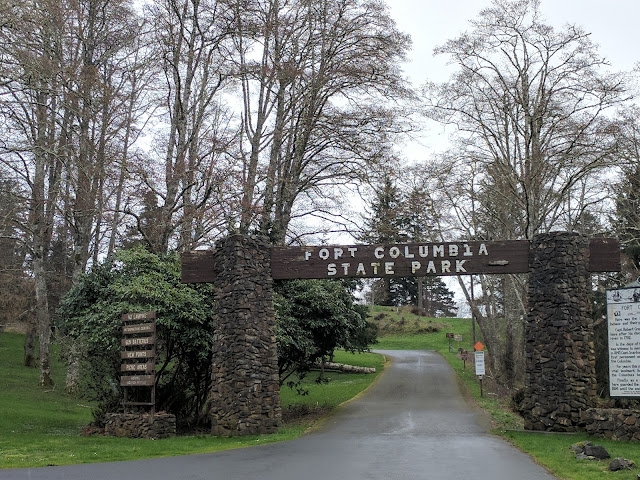 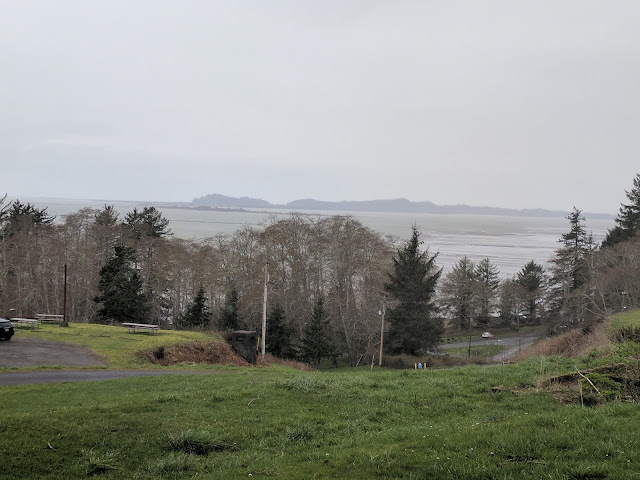 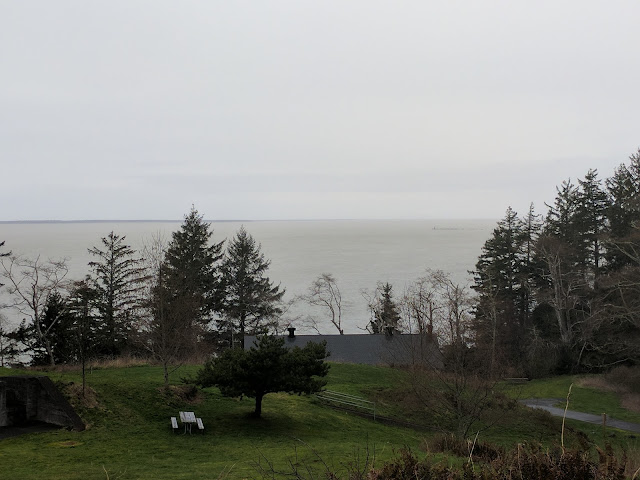 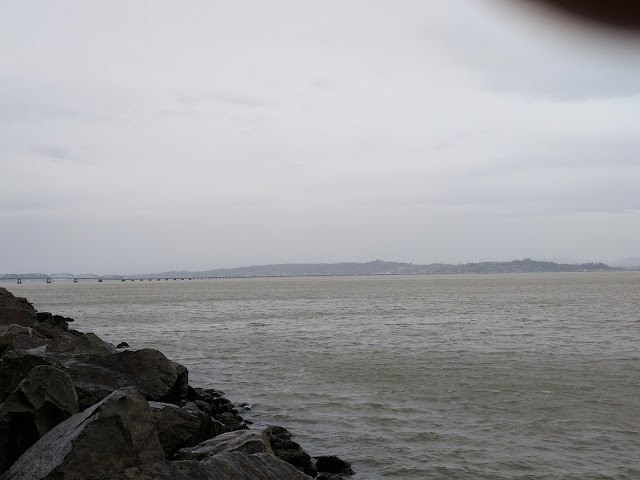 Well, it was getting to be time for food! (what can I say? JoJos just run right thru me!) Next stop on the agenda was Westport OR and the AV charging station located in the parking lot of the Berry Patch Restaurant!! 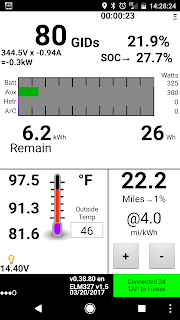 Notice batt temps dropping? I went from 8 bars to 7

Now the "one phone for all" issue was a nuisance but really hadn't hurt me so far but that was about to change.  I plugged in, set my timer with the goal of checking it in 30 mins.  I went in and missed the Hot Turkey lunch special. But it was 2:30 and they closed at 3 so was kinda feeling lucky I had made it on time.  I ordered food, ate most of it and finally decided to check the car. Probably had enough already so I go out there and only 29 minutes after the charge had started, it had already stopped! Oh oh, not good. I thought I might have overheated it.  I turned on the car, no warning lights and... Holy crap! It was full! 94% SOC. I finally found something that could eat faster than me!! 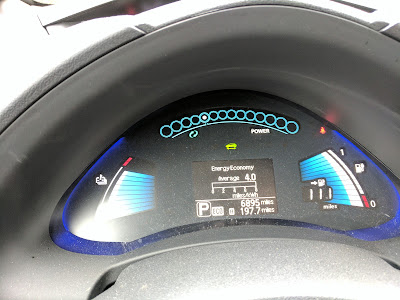 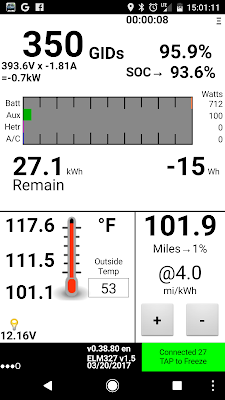 Now, not having a charging log was really pissing me off. I felt like going home and beating on my LEAF Spy phone! Oh well, no time for pie. On the road!

As I drove, I kept looking at my distance to home and the GOM.  The GOM was 4-10 miles ahead of my distance to home but LEAF Spy  was a steady 3 miles short. Well, we all know what that means. So next stop was Centralia. By now the rain was coming down pretty good and the OR adventure was over. I was back in my neighborhood. So, now it was time to get home, I kicked it up a bit and my steady 4,0-4.1 miles per kwh soon settled in around 3.8 miles per kwh. But again, it was not me, it was the rain!

I was in Centralia basically long enough to use the bathroom and leave picking up 10.05 kwh in 13 minutes. 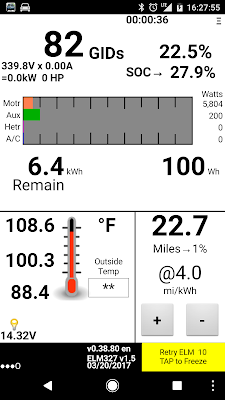 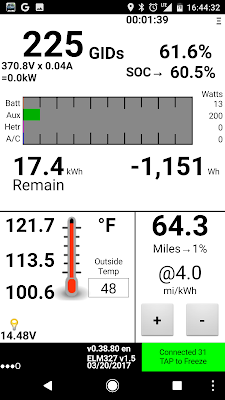 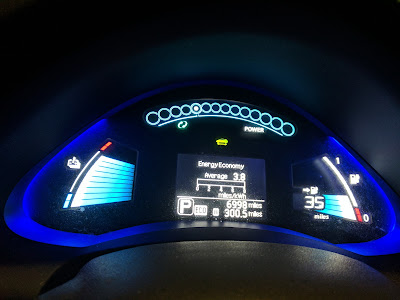 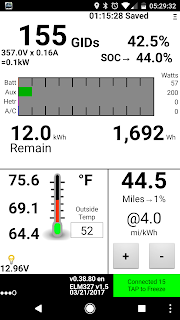 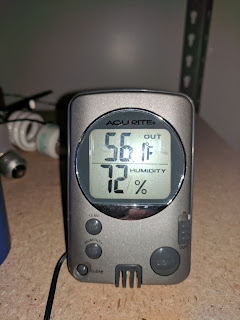 12 hours cooling off. Down to 5 TB's.  GREAT improvement over previous 24 kwh packs!

Previous packs generally took 24+ hours to cool down, sometimes 36.  But this time, I was back within ambient in less than 18 hours so not only does the 30 kwh pack go farther, charge faster but also seems to shed heat quicker as well.

But this trip really illustrated how much more effective the 30 kwh pack worked for longer trips.  I had done a trip of similar distance using many of the same chargers in my 2011 24 kwh LEAF and found that my 85 mile range was really only 50-60 miles after a two 30 minute sessions due to the quick ramp down of power.  After the 2nd charge despite chargers being roughly 25 miles apart, I found it difficult to skip chargers without some very careful driving. But the 30 kwh LEAF, I was able to leapfrog 2 of them stopping every  90 miles and as seen above, none of the charge sessions lasted 30 minutes despite my best effort.  When I did stop at every other charger, I was could be back on the road in 15-20 minutes with plenty of buffer on a windy rainy day.  A HUGE improvement!
Posted by DaveinOlyWA at 1:19 PM