Yesterday, I had the privilege of doing a test drive of a 2017 Chevy Bolt LT equipped with QC and Comfort package. Thank you Bob @ Chevy of Everett for hosting my drive!

So, before we get into the details, first off; I don't really care about the acceleration. Any EV has more than enough AFAIC, so didn't really check that out despite nearly EVERYONE saying that testing "Sports Mode" was a required part of the test.  My EVing is all about getting range and before you say "238 miles is more than enough" let me just mention that I approached or exceeded that 21 times in the past year in my LEAF and by large, did it without any stoplight drag races!

After reviewing some numbers, colors and availability, I was sent off with the keys to go "warm" up the Bolt. This gave me a chance to spend more time in the seat,  play with the controls, grab some screen shots, etc. Here are a few in no real order 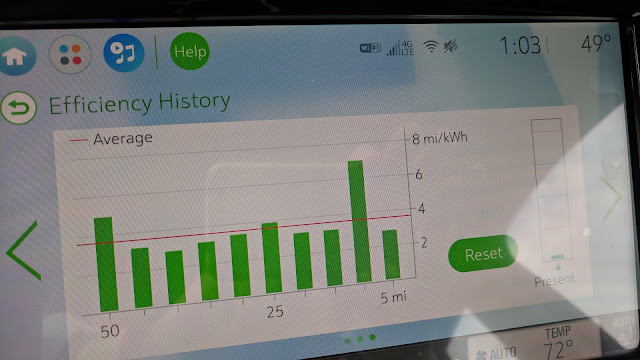 Efficiency Chart in 5 min increments. Seems like the Prius started
this and everyone is following suit. Liked it then and like it now! 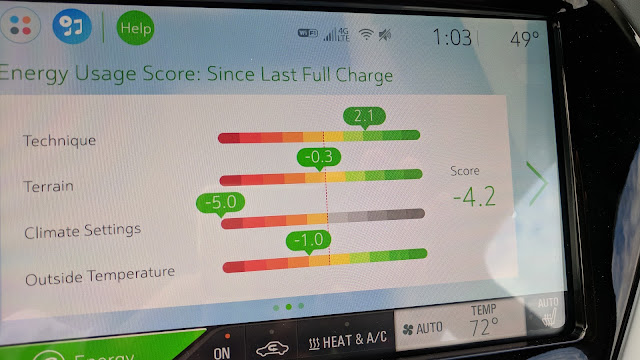 Super cool! I can concur with the climate settings. Car was much too warm for me!
Knowing the efficiency impact of wearing a hat and coat will be awesome! 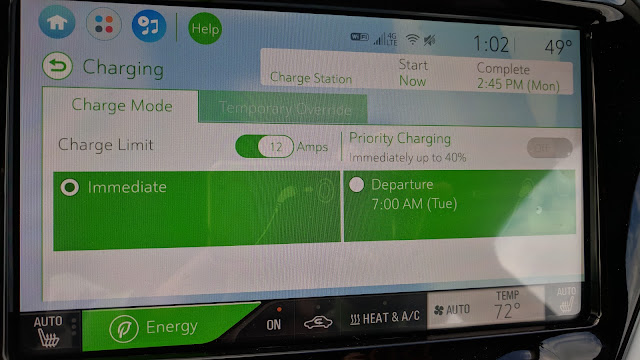 Ok, I admit I changed the amperage to 12 from 8 and hoping that the pop up resulting from
that change  is gone for good. Any current Bolters? Please assure me I don't
have to change this every time I start the car! 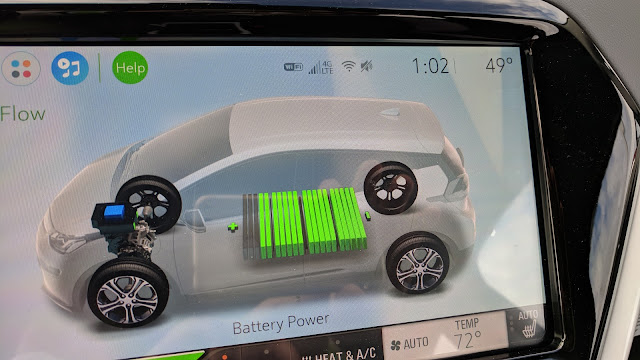 Another Prius Throwback Screen.  Nice I guess since it can be toggled to
the other much more informative screens above. :) 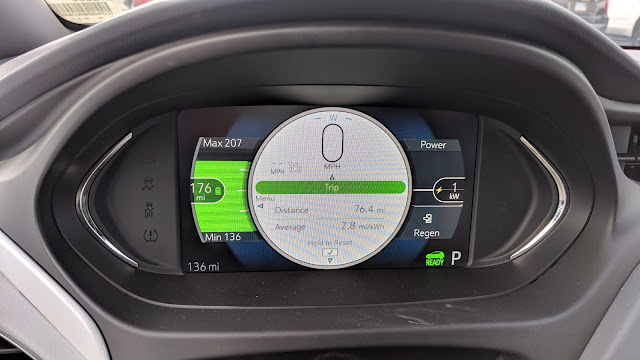 Driver Display.  Didn't find a dedicated one, but the power meter  is the teeny
tiny display on the right currently displaying 1 KW. The white line is actually the indicator and moves up and down while driving. The swing is very small though.   A bigger display accurately
showing regen, power and friction braking is what we need here. But it does
have the digital readout, So half a point! 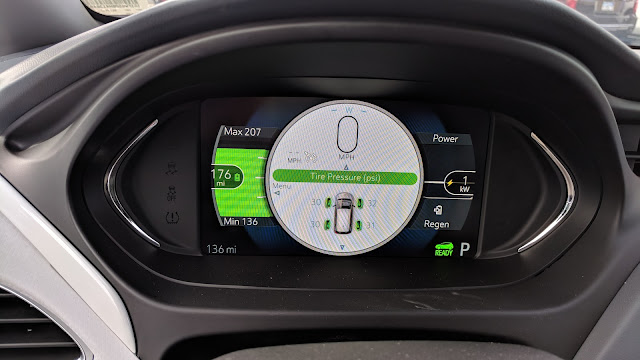 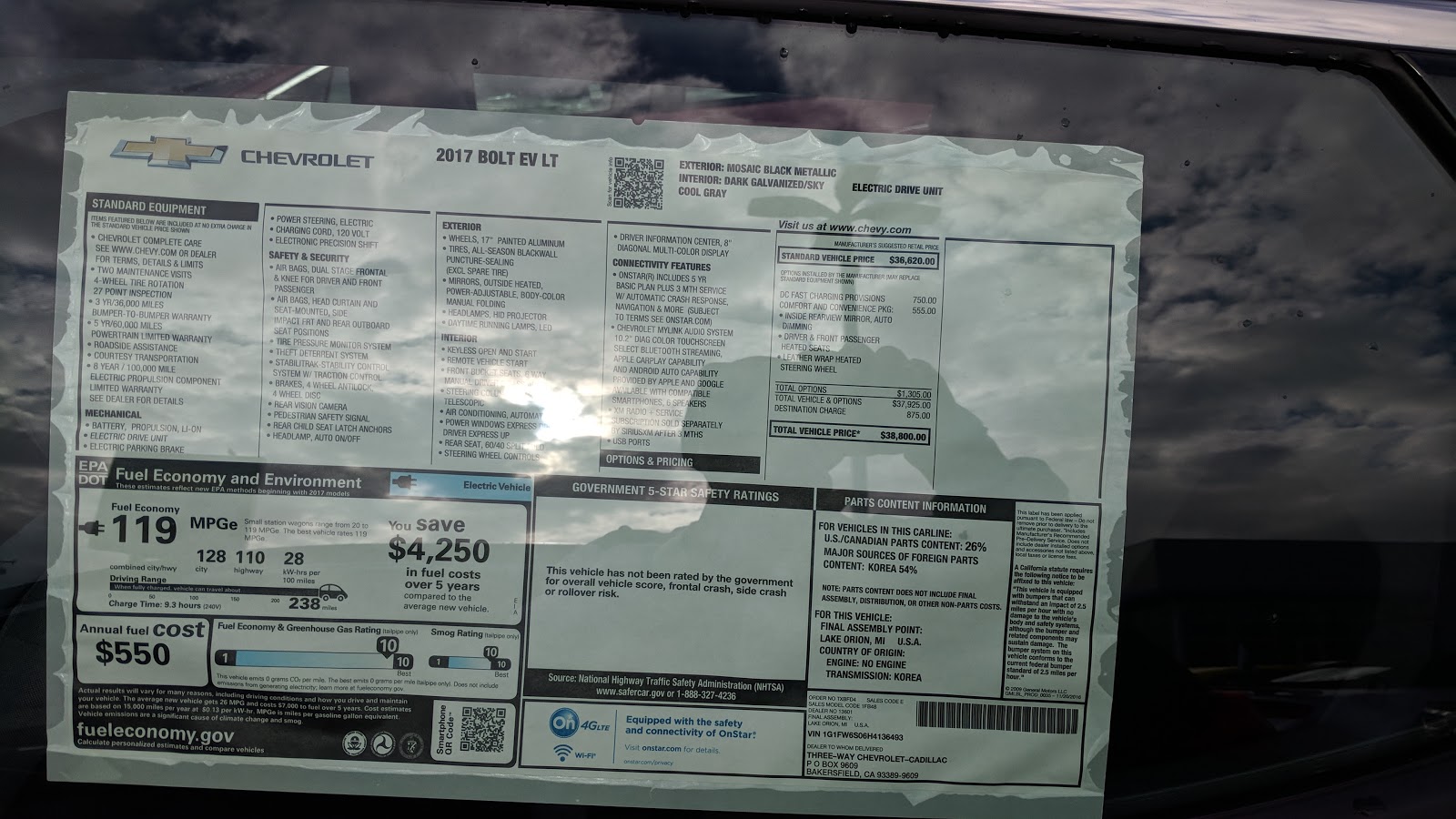 Sorry for the size of the pix but its all but unreadable unless displayed at original size.  Priced at $38,800. (Dealer dropped price about $3800 if purchased today) 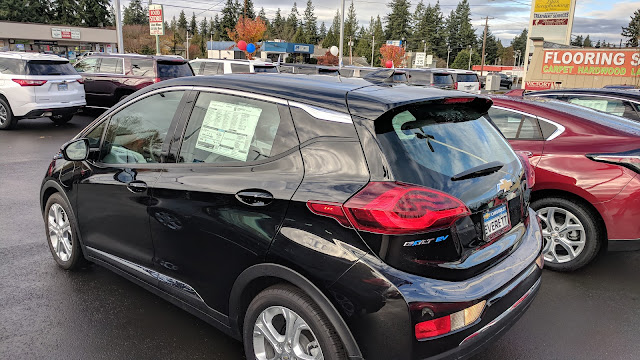 This was the one I drove and it was one of SEVERAL Black ones on the lot!

Ok, to address another big issue; The seats were not uncomfortable in any way.  Yes, there is a lack of padding which a seat cushion would easily fix but unlike other Bolts I have sat in, the side bar on the seatback did not jab me in the ribs.  I am not sure why. This is not a newer 2017 (delivered to dealer in May) so unlikely to have been tweaked by Chevy in response to the multitude of complaints over social media. Bob also confirmed Chevy made no changes.  My only thought was maybe it was the leather seats that I had the issue with. To be honest with you, I sat in so many Bolts during NDEW events (I went to THREE of them!) I lost track.

I have to say, I simply got lucky. I am not a big guy 5'8" (and shrinking... in one direction anyway) or extremely overweight.  I do feel myself settling into a distinct position held rather snugly in place. It is easy to see that someone bigger might  not fit as well as me.

On the drive, One pedal is of course a must and somewhat disappointed that the Bolt uses the old LEAF method of shift twice to get into "Low" for one pedal operation.  The Bolt shifter also requires you to squeeze a button on the side to shift. I guess it prevents accidental shifting. Didn't like that part. They should have instituted a delay for bad shifts like going from Forward to Reverse at higher speeds, etc.  I do a lot of shifting from neutral to B mode in the LEAF to take advantage of various levels of deceleration, slopes, etc.  Didn't try it on the test drive, but venture to say the Bolt won't shift to neutral like the LEAF did when an "illegal" shift was done.  In the grand scheme of things, it might not matter as much with the one pedal driving option that my current LEAF does not have.   I do like the 2018 LEAF's button selector option for one pedal though.

As expected, the drive was quiet and smooth. Absent is the high pitched sound of the LEAF motor (of course that also went bye bye in the LEAF for 2018).  I didn't really push the limits on corners but the Bolt seemed very rooted and stable also expected, compliments of a well placed heavy battery pack. There was the nice high seating position with good views and a much lesser obstruction of the A Pillars when making left turns as compared to the LEAF as well.

Also a few mentioned higher road and wind noise on the Bolt verses the LEAF which I did not notice.  Our freeway stint was short, only a few miles but the ride was smooth without any wind noise I could detect. The weather was windy but dry during the test drive on a day that saw small bursts of rain with mild wind gusts.

So there you have it! The Bolt is a great option and again, I think anyone having seat comfort issues can fix them relatively easily with a seat back cushion although I doubt I will do that.  During the ride, I felt no discomfort at all.

The cargo space is limited and could be an issue hauling what I need for work but it would only be an issue when there will be 4 occupants which only happened 12 times this year.  Most of the time, I would be fine with using the back seat for storage and having a 2 passenger car (or 3) and the key thing to remember, A Bolt in the house would be under completely different circumstances than a LEAF upgrade since both the LEAF and Bolt would be there. I could always switch to the LEAF for those 12 occasions if needed.

So the Bolt has the range, acceptable comfort, and is available right now.  It is definitely a go for me.

One thing to mention; It will not be easy to cover 2 destinations I have for work due to lack of CCS charging infrastructure in Winter.  That will change but when? Summer is doable. Its actually 238 miles RT to the farthest of the two (the other is 228 miles)  but this I have full confidence I can do. I simply need to avoid Sports mode :).  Since both these locations (Ilwaco and Long Beach) are in SW Washington,  public infrastructure enhancements cannot be relied on to happen in the near future. Both locations are easily reachable in my 30 kwh LEAF.

Purchasing would have to be the only option. But that brings on a whole new set of issues. Normally I wouldn't come close to qualifying for the full $7500 tax credit and this year is no different.  Add to that, I have already contributed to a previous employer's 401 K so my tax liability is even lower making a 2017 purchase out of the question.

Now, none of this includes the federal tax credit which "should" be still in place (I have faith that trump will be thwarted as usual) and again, won't qualify for the full credit but I would likely look to increase my tax burden likely by converting a portion of my 401K to a Roth. Not sure what that would cost, but again, that is for a later blog.

So faced with a lot to think about. The Bolt would be a long term car for me. Its range guarantees viability for many years down the road but its lack of tech concerns me. The price concerns me as well especially since the LEAF promises to be a much easier finance due to favorable lease terms along with the strong likelihood of being over $10,000 cheaper but all that could change.  Possible changes to the federal tax code along with the limited time left for the Washington EV sales tax credit (valued at over $3,000) could easily make the LEAF only slightly cheaper than the Bolt.

In the grand scheme of things, I really just want the two EV option but at the same time, I want the best cost/benefit option available and am willing to put forth the effort to make it work.

In conclusion; If not for THE best lease terms bar none and expected loyalty discounts from Nissan, I would be driving a Bolt right now.  It is a great EV option and yes, its expensive but realize that the average person would save about $1000 per year driving it over gas.  I however, am far from average.  I logged over 35,000 miles on my job in the past 12 months and that is my normal. Unlike previous years,  a greater percentage of those miles were logged on my personal vehicles, mostly the LEAF due to its small bump in range  (resulting in a huge increase in convenience of making extended trips) over the my 24 kwh LEAF.  Logging miles on an EV using rates designed to mitigate the cost of a gasser is a win win for me. 2 years ago, I ran the numbers on my 2013 LEAF and determined that my reimbursement from work paid EVERYTHING on my LEAF and still put money in my pocket. That means all my charging, all my personal driving, all my insurance, all my everything related to the cost of driving my LEAF.  The Bolt with its additional range will do just as good. Now it would do better if Chevy provided a program similar to NCTC but alas, we already knew that range does come with a price.

Some updates; Lease terms I mentioned above would likely be MUCH better for me in that the money factor I got on my worksheet can (and should) be MUCH lower.  So the $4000 in finance charges would be more than halved for my situation.

Also; the Disclaimer screen for changing to 12 Amp charging is apparently a cousin of the CARWINGS "I accept" screen and sadly, just as stubborn!!