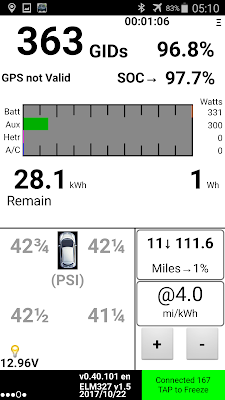 I finally hit my goal of reducing LEAF usage!!....Well sort of.  However I did have to do tire rotation #4 so it was definitely a month of mixed results.  I did become a "50-50" car with 227 Regular charges, 227 QCs. but that will be changing quite dramatically and I will explain that in my next blog.

But the Corolla went 163.7 miles for October costing $13.10 or a hair under 8 cents per mile.  I will be using the Corolla much more for November which means unlike October, I will be buying gas this month.  (last gas purchase was Sept 19th)

But to be clear; More Corolla usage has nothing to do with reduced Winter range on the LEAF. Its all about preservation. It is easy to sit the Corolla for several weeks at a time in the dry Summer but the wet Winter, its a completely different story. The car sits outside (under a tree so not "completely" exposed) so mold, mildew and what not will be a battle so driving it at least once a week with the heat blasting away to dry up the interior is pretty much required.  I should really get one of the portable carports from Harbor Freight or something for my Christmas present but... maybe.

The LEAF went only 1965.8 miles (first time under 2000 since last December!) costing $13.10 or less than a half a cent per mile.  Without NCTC, the cost would have been roughly $44.76 or 2.3 cents per mile.   My NCTC benefit, I was using the tier one rate of 9.3 cents per kwh which isn't technically right since its power reported as delivered to the car. In reality; the station is drawing more than that from the power company but its close enough.

The pix shows good battery stats and I actually finished the month at "new" numbers for the last 8 days of the month but there was a lull in the middle of the month where I did see lower figures of 79.88 ahr and 95.75% Hx. Both GIDs and SOH remained at the max of 363 and 100%.

But the real story is Western Washington's 6 month long Summer is finally over and with a bang. First we had a 3 day Fall complete with Monsoon's and we shifted right into Winter so check your tire pressures. Many will need adjustments. Remember there is roughly a one PSI drop per 10 degree temperature drop. Only adjust your tire pressures during the COLDEST PART OF THE DAY. First thing in the morning before any driving will do just fine.

As for me; I have washed my windshield wiper pads, conditioned the windshield and wipers, and put the electric blanket back into the car.

To condition your windshield; take some fine steel wool and basically polish the glass. Not as effective as Rain X but works pretty well and is much easier to do. Rain X is awesome but hard to apply correctly and it doesn't last more than a few weeks here.    With your wipers, you want to rub the blades down with denatured alcohol. This smoothes the blade allowing them to slide across the glass easier which means better contact with glass for a more effective wipe.
Posted by DaveinOlyWA at 10:00 AM