Yesterday was a very strange day.  First my weekend plans were canceled at the last second so I decided it was time to see if my new EVSE worked. I had actually not even looked at it yet.  So I grabbed the bag, took it out, removed the plastic and noticed it is heavier than previous versions so apparently Nissan beefed it up to handle 240 volts maybe?

So I started browsing Plugshare and first time I realized; There are hardly any 14-50 plugs around outside of campgrounds.  Most campgrounds were closed or charge a hefty fee for entry.

So after driving around the neighborhood including Pacific Raceway which was supposed to have several, I couldn't find any and couldn't figure out how to get behind the grandstand so not sure the right gate was open?? Oh well, another day.

So I got a coupon for a restaurant at Tacoma Mall so I figured I would go there to charge and eat so I get there and its its usual busy Saturday afternoon with several dozen jockeying for parking so I get to chargers and we have 3 campers; 2 LEAFs and a Volt that is parked blocking a DCFC. 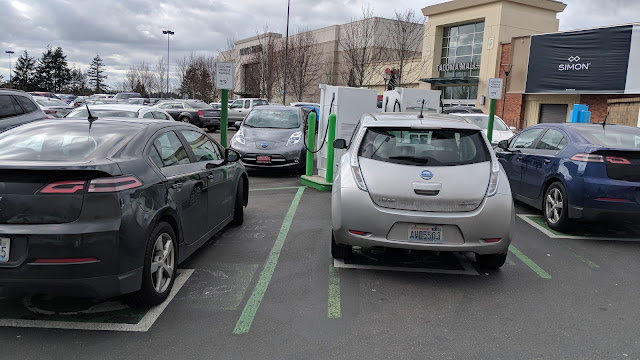 Luckily there was a space on the other side next to the Gray LEAF so I was able to charge.  Later a Facebooker reported that DC1 (facing pix) was inoperable which I confirmed 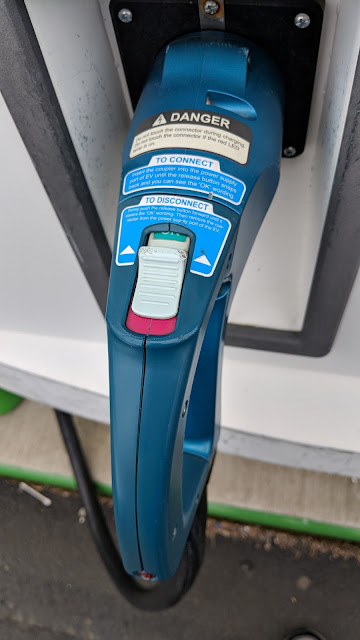 The button is stuck which means it will not lock into place when plugged in. Unlike the older AV plugs which could be fooled by holding them in place, these won't work.  I tried to loosen the plug and it simply did not work. Something internally is stuck or broken...

So as I was leaving, I was either delayed or witnessed (while not moving) a half dozen traffic issues caused by people who did not realize that nearly all of the lanes between parking spaces at Tacoma Mall are one way and most do not have enough space for two cars to pass...

One would think the angle in parking would be enough to determine which way you should go but apparently not.  But then again, signs that say  "Electric Vehicle Charging ONLY"  were ineffective so guessing spending money on One Way signs would be money best spent elsewhere... 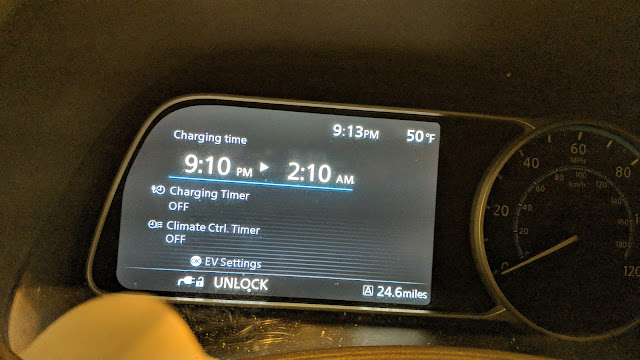 Ever wonder if your car will be charged on those days when you have to leave much earlier than normal? Here is one way to tell.  Now I am guessing the car is using standard 6.6 KW charging to calculate the time and I am only using 5.76 KW  EVSE so... I will say that at 3:30 AM when I did leave the charge was done!

I had thought about how I could test the Automatic Emergency Braking System.  Waaaaay back in the day when I was a die hard Prius fan,  Someone tested the AEB system by putting a bunch of cardboard boxes on the road and driving towards them.  The funeral for the boxes was a few days later... 😏

Now since I already have missing paint from the from a "hit and run" parking lot incident FIVE days after delivery, I decided not to risk any more paint.  But one thing I did notice is that in any case where the AEB senses that E Pedal is not decelerating fast enough, it will at least give a 3 beep warning.  Now will it do the braking too?  Don't know. Since I don't drink, its hard to get up the courage to test it...

Again??  Well, the first time I posted my test, I had someone who claimed LEAF Spy estimated range was not to be trusted. I simply could not let that go so I tried it and found out that...

GOM is what cannot be trusted but this time it has a HUGE  hidden reserve at the bottom.  So naturally I had to update the post!  Read more here

As reported earlier, my hoped for advantage over the Bolt concerning DCFC charging was simply not happening. Don't get me wrong. The LEAF still charges faster but nowhere near the HUGE  advantage my 30 kwh LEAF had.

But I did see a tiny sliver of hope!  The other day during our MUCH warmer than normal weather (Seattle smashed its all time high for the MONTH by 3º!)  the charge started its ramp down around 60% which is a significant jump over the 52-55% I had seen so far.  Does this mean back to a 75-80% full speed charge come Summer?... Probably not, but still nice to hope. Hope is good!

Jim, our LEAF Spy developer updated the formula that determines SOH because some were reporting a greater than 100% SOH and that caused my SOH to drop 2½% overnight!  As I had mentioned before, both my ahr and SOH have steadily declined.  Also,  the usual tricks to bolster the numbers are not working.  Drive a lot, cycle deeply, QC frequently, etc.  Nothing is working!

Now the thought that my driving need is no longer enough to overwhelm the pack like the old days did cross my mind so may have to wait for a 700 mile week to make a real determination but even that is seeming unlikely.

But I only post this for informational purposes only. The reality is the drop is hardly alarming.  Extrapolated, the rate is just at 3% a year.  Now, Jim has decided to go back to the "regular" method of determining SOH (Don't ask me, I have no idea how he does it)

BUT the drop has not affected my range in anyway whatsoever. I am still EASILY getting 150 miles of range in "real life" driving and yeah, that includes slowdowns for traffic but also includes 70 mph jaunts in the very early morning when traffic is "lighter"

But the BMS is still not behaving like I want it to.  The other day, I charged from a low state about 10% finishing at 4:00 AM. I know this because that was my planned departure time. Since it was only a 125 mile day, I didn't really care if the charge cycle completed or not, I would have enough 😎

Anyway,  taking off in the morning requires a few trips to the garage to load up and I saw the car still charging at 3:50ish but it was done at 4:06 when I left (I get paid for travel so yeah, the time is not approximate)

So now, I guess I need to define "overcharge"  and despite 30 days of ownership, I still can't do that.  I fear my only option is to charge to full every night for 5 days and average the results or see if any consistency shows up. But the damage that full charging can do especially with a rogue BMS scares me a bit... But...will probably do it since I don't see any real way around it.

BUT,,, its not all doom and gloom.  My Hx is is reputed to be a measure of internal resistance where the higher number means lower resistance which is the characteristic of a healthy pack. So.... 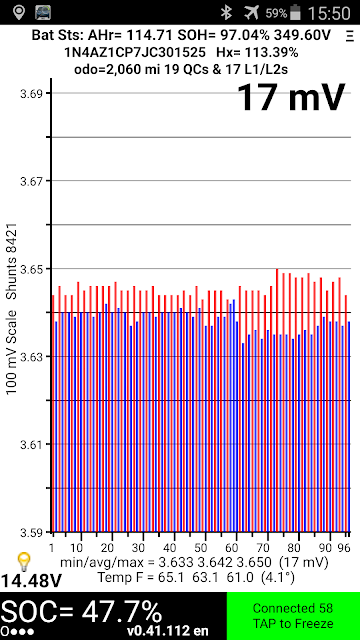 Posted by DaveinOlyWA at 8:56 AM