May 2018 Drive Report; The Trend Continues??

Ok, so first full month with new work commute and so not much of a surprise that this is lowest combined driving total in several years. The last time I drove less than 1081.0 miles was in July 2015 which made sense since I was out of town for 17 days of July returning in early August.   Now there have been several times with less than 1000 EV miles (4 in past 5 years) but gasser miles pushed the total over.  Since I no longer have a gasser of any kind (well, still have gas lawn mower but hasn't been started in 4 years) its ALL EV!

For the month of May, I drove either 1079.9 miles or 1081 miles costing me $6.74 or .6 cents per mile.  NCTC along with various free L2s that remain contributed 173.53 kwh and unlike the recent past, this month that cost me nothing.  I did not have a chance to Blink in May which was the source of most of my financial hits due to going beyond my 30 minute free sessions. Blink starts billing one second later with no grace period.   Some don't like this but its better than being cut off at 30 mins on EVGO especially if you are desiring 35 minutes of charge!   I also hit a high of 21 home charging sessions. Not since my 2013 have I charged that much at home so why bill so cheap?

Well, my new commute being as short as it is (roughly 24 miles RT depending on where I park at work) means charging a lot is not all that necessary.  During May, I charged to full one time ( for an experiment of course!) and then completed my 4 day commute with NO side trips during that period.  Drove 95.3 miles finishing the week with SOC of 48%, 88 miles on the GOM, 266 GIDs and 20.6 kwh available.

Well, if you haven't figured it out, I avoid charging to full as much as I can due to degradation fears partially but mostly because I simply don't need the 170 miles a full charge gives me.  So my charging habit has been to start the week with 45-70% SOC, drive to work on first day of week, then on the morning of days 2-4, I plug in when I get up in the morning. This gives about 75 mins of charging per day. More than enough.

For years, I have had to adjust my logs to match the Car's odometer.  I use trip A for daily logs, Trip B for monthly and they DO NOT match. In fact, they aren't even close.  The 1079.9 is the daily trip A totals while the 1081 miles is the Trip B reset.  While this does not seem like much, its actually one of the smaller discrepancies.   Now don't get me wrong, I occasionally forget to reset one meter or another so I don't reset it late, I simply let it ride until the next day since the FIRST thing I always do is log the mileage into a notebook I carry with me. So any combined days, I simply subtract one from the other to get the right total for each day.  I simply find it highly unusual that the adjustment always runs the same way each month?

Battery stats have continued their now very predictable downwards slope. Ahr and SOH continues to drop a hundredth of a percent daily, Kwh remains about the same, and Hx is spiraling ever upwards reaching (again!) a new high in May of 116.47%.  I have given up trying to make sense of the Hx so have to write that off is a erroneous reading from LEAF Spy or simply...well something.

First off, a clarification of my thought process. Despite a lot of noise to the contrary, each LEAF battery pack has been an improvement over the other from 2011 to 2013 to 2016 30 kwh (Yes, even that one!) so I was expecting the trend to continue, BUT.  The 40 kwh pack has changed all the rules and not sure its chemistry or simply still refining code changes in LEAF Spy.  Now, some think that LEAF Spy is useless and maybe the readings are not indicative of what they are supposed to be but up till now, LEAF Spy has demonstrated and been proven to be effective for calculating drive range and monitoring degradation based on several hundred if not thousands of user inputs.

The 24 kwh LEAFs exhibited just under 5% degradation annually which was VERY much unacceptable.  The 30 kwh LEAF showed well, 1 to 3% annually, maybe?  But the 2016 despite having nearly 30,000 miles I did not have to make a true prediction since many LEAF batteries hold up well delaying degradation initially.   Either way, a 5% annual loss or even 3% (my prediction) was also unacceptable.

So this should mean I would be unhappy with my 2018, right?  Well, no not really.  The larger pack should mean less stress on the cells over distance simply because there is "more to share" the load, right?  There is also an added benefit that the 40 kwh LEAF also provides more range than I normally need.  Granted my need is a LOT less now but I did drive it 2 months before changing jobs and the range was more than acceptable to the point that I rarely did a full charge despite facing things like 120  mile days in Winter, etc.  So a 5% loss annually still puts me at around 120 miles of range at the end of my lease.  The question becomes; Is $9200 to expensive for an EV with 120 miles of "usefulness?"  Range simply adds a lot of options!

Previously, it was rather easy to manipulate LEAF Spy stats based on driving and charging habits. Wanted the numbers to look good? Well, drive a bit more and fast charge a lot more.  This was almost always good for a 5% boost or more.  Well, the 2018 pack simply does not do that.  I have tried every previously known trick to no avail.  Without fail, my ahr and SOH has either stayed the same or dropped. Not one single time has either risen since the day I got the car.  I had thought it the numbers had bumped up one time but I went back to the paper logs and it turned out to be a "deciphering" problem (AKA; can't read my own handwriting...)

To date, I have lost 1.76 ahr and 1.52% of my SOH.  Granted, over half that loss happened literally within a few hours.  So in making a trend line, I had to either include that one day or not. So I put it in...for now.  In a few months, I will evaluate if the current much less dramatic trend continues, but if extrapolating the loss to the end of the year. I would be looking at ahr of 108 (7 ahr loss, 6% drop) and SOH of just under 95% (about a 5% loss) 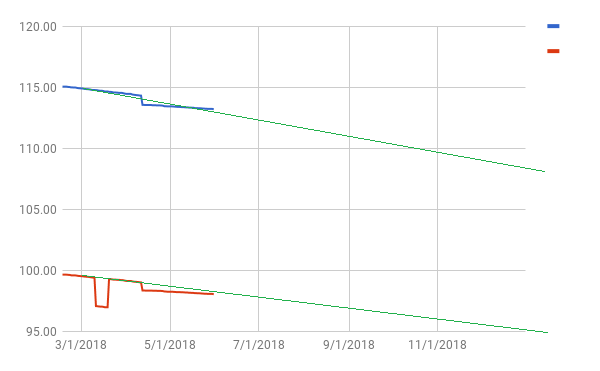 Obviously, maintaining the trend since that one day almost 2 months ago would be VERY nice but we shall see. Summer and its associated heat is arriving.  OBTW; some afterthoughts on the April 11th event. (my big drop day)  I parked the LEAF with a higher than normal SOC of 85%.  The day was rather cool so didn't think much of it and doubtful it played a part.  In reviewing temperatures of the pack; they were nowhere near the temps of either my OR trip or the Wild Horse trip, neither of which altered my stats trend in anyway.

Ok so that is the trend of ahr and SOH.  Now we can debate forever on which LEAF Spy reading is the most important but since hardly anyone comments on my blogs, I would win! 😁

But I have always looked at kwh available as a key indicator along with ahr.  Both use well defined terms unlike SOH which is also well defined but also hard to quantify with other packs and of course the Hx which seems to be off in a World of its own.

But the degradation of high SOC is still a concern so....well, I only have 15 examples to show you. I guess the key is the change from Full charge #1 the night I brought LEAF home to a few weeks ago on my work commute test.

Reminder; The date listed covers the miles driven while batt stats are taken the morning after before any driving is done that day so the full charge would be the night of the date listed. 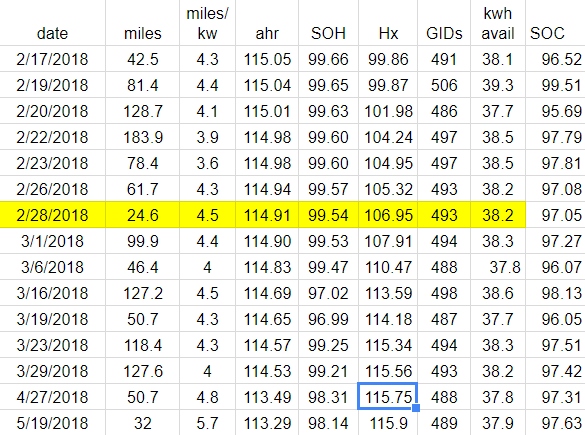 Looking at this chart, we can see when full charging was done more frequently, capacities went up.  This could show the benefit of top end balancing but again, the ONLY reason for top end balancing is getting a few more miles from a charge. There is no proven benefit other than that since LEAF cells balance all the time.  Since the car was new with build date in Jan 2018,  the first Feb 2018 session would have been the first full charge the pack had so guessing top end balance would be farthest off but it is a new pack, right?  So lets go to the April session which was my Wild Horse trip and nearly a month after last full charge and we have a .4 kwh difference and a 5 GID difference.

But the issue with full charges on this pack is the lack of consistency in any of the numbers, especially kwh available and GIDs.  ALL my other LEAF packs were rock solid on both GIDs and ahr.

I will contemplate trying full charges every day for at least a 7-10 day period but not willing to risk it until this Winter so stay tuned. I personally don't think I will see much of a change. Maybe a half a kwh?

Just kidding!!  Guess will just have to wait and see what next month brings!
Posted by DaveinOlyWA at 11:34 AM