This review of the Bolt, Tesla Model 3 and the LEAF is fairly balanced and like any good review, the results was a bit of a surprise which means each reviewer basically talks about the good points of each car right up to the end but the decision was unanimous so if you are not sure who should win, check it out!

Truth be told, in a general "use fits most" mode, it is a good review but its all about what you want to use your car for and if that involves a lot of 100+ mile trips from home then public charging options have to be part of the equation.  I did a review of the same 3 cars coming up with the same conclusions last Thanksgiving after having test driven the Bolt and LEAF and only reading about the Model 3.  I did get an up close look at the 3 and I will admit, I had the plan of getting the 3, accepting as much overtime at work as I could and using the mileage reimbursement to pay for the car, but...

Working on the road is tough. Much tougher than dealing with congestion, idiots on the road and far flung clients.  Eating on the road simply became much bigger challenge than I was up to and my blood tests were simply insane.  Over a year ago, I started taking meds to reduce my blood fat. The acceptable range was 25-125 or something and I was testing at TWO THOUSAND. All this was happening despite the fact that my job has a relatively high level of activity and I was not gaining weight.   So I did the meds for a year and rechecked my blood and although better,  450 was hardly anything to brag about. It was then I realized I might not survive long enough to pay off the car.

Then the accident happened and forced me into a decision that took out the #1 choice since getting a Tesla was out of the question.  So it was LEAF or Bolt but Bolt feel short on comfort and cargo space.  It was simply not doable with my work needs so LEAF it was. It was, after all, my true first choice anyway.    You see, part of my Tesla plan involved spending all my "Zombie Apocalypse" money, cashing in some stocks, etc.  At the time, it seemed doable but on retrospect, I was relying on an income from a company that guaranteed no hours, had no benefits and REALLY crappy healthcare plans.  My script cost me $160 for a 90 day supply. My current employer pays ALL the cost while my out of pocket did go up slightly but only because I added my Son to my Dental (RGIS didn't offer it since WA State does not require them to) and selected orthodontia coverage.  Basic Dental coverage for me only would have been like $6 a month. UNREAL!

So Summer is here so we should be concerned about heat, right?  The World is suffering thru a major heat wave of epic proportions setting eye popping records on several continents and its still (or was) only June. IOW, the real heat of Summer has yet to arrive.

Unlike the past few years, Olympia is experiencing... well, normal weather.  Despite seeing temps 10-15º above normal earlier in June, since the first day of Summer we have only cracked 80º a few times with most days at or below the average June high of 75º.  So the "local" concern with high temps has not been a common thing but nevertheless, I am sticking with my plan of no or very rare full charges until ambients drop below 60º consistently which means not till October and even then, they will be rare.

So for the month of June, 2018 I went 1490.7 miles with 196.196 kwh of public charging. This month there were no additional charges mostly because I didn't do any Blinks.  My real cost was  .86 cents per mile or $12.90 of home electricity.   Oh did I mention NCTC was also a consideration when selecting the LEAF over the Bolt?  To date; my charging costs of both home electricity and public charging fees were $63.01 at the end of June.  Not too bad!

Another benefit of the job change was commuting.  Yesterday I worked since it was 2.3 times pay and the holiday traffic or lack thereof did have an effect. Normally my drive times run 36-39 minutes with only a handful exceeding 40 minutes. Mind you this is "roundtrip" totals and the timer runs all the time so its not all even "drive" time so yesterday on the 4th, I set a new "speed" commute record. 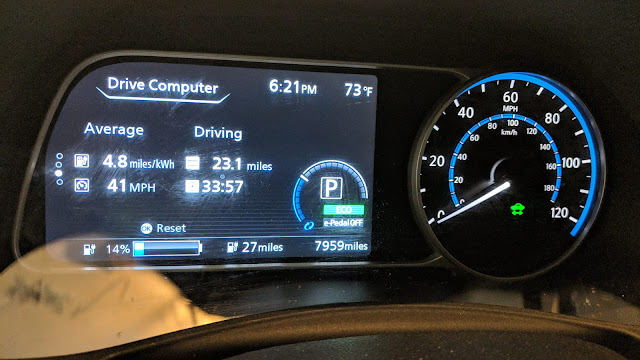 The benefits of such a short commute are literally priceless. It will be tough managing finances with less income but I am willing to try!

With a commute that short combined with my 4 day 10 hour per day work week, I also had the liberty to take road trips without an overriding concern of exceeding my lease mileage.  So half the mileage for the month was for the two I took to Central WA.  There it was warm!

For those that don't know. AV is no more...well at least in the public charging sense. They sold that division to Webasto and so far, I am liking the new owners!  Within a few weeks, they updated the stations so now my 2018 is compatible with their quick chargers.  They are rolling the update out in stages but the speed has been very impressive.  I will be out of town for a reunion but when I return, I will be doing a multi day road trip down the Oregon coast to test those Webasto stations

If you have a 30 kwh LEAF and have not yet heard (I received my notice in mail 2 days ago) there is a SW update that corrects an issue where the LBC (Lithium Battery Controller) is incorrectly calculating parameters of the pack which is possibly causing the BMS (Battery Management System) to restrict full access to the good usable range the pack has to offer.  As we know, some are experiencing CAAARAAZZEEE degradation on their 30 kwh packs even in the super cool (not temps mind you, just a measure of awesomeness we are drowning in! 😍) Pacific Northwest and this is probably why.

So should you run on down and get the update? Sure, why not?  The very early and limited info received from people who have done the update is mixed but generally positive.   Now there is ONE report of someone seeing greatly restricted fast charging speeds after the update but need a lot more collaboration before I will make that claim although that was a concern for me.  Since I live with the "heat penalty" without choice, I have to say, it does appear that the throttling of the charging speed can be inconvenient if you are not prepared for the additional charge time but it will likely extend your pack's life so that is a good thing, right!  In the end, its all about having the correct expectations.

But most have reported back that they had missing capacity bars restored, more range, etc.  Realize that any software update almost always requires the BMS to reset which means it loses everything it knew about the pack (which since it was based on erroneous info anyway is probably a good thing, right!) so bars restored could easily disappear soon.  I don't expect that to happen.  For all you guys out there who have done the update, let me know how it goes. If you have LEAF Spy data for capacity, QC charge rates, etc. that is even better.

All my road trips have been primarily illustrating the benefits of well placed public charging.  Although VW has yet to show up in our region,  Washington State is rolling out their new stations and most of them should be in this year. Ellensburg was one and soon, the tri-cities will have theirs along with Yakima making a trip to Eastern WA almost... easy!

Sadly, two neighboring counties; Mason and Grays Harbor, continue to be ignored.  I am beyond surprised this continues. Grays Harbor County has crazy demand fees so I can sort of see why anyone would be hesitant to put any fast chargers there but Mason County power is CHEAP! They also have front porch access to a huge variety of recreational activities.  Now, my 40 kwh LEAF has the range that most of the county is easily reachable for a day trip but elevation challenges of say a hike and picnic to Lake Cushman (105 miles RT) makes even a 30 kwh LEAF trip out of the question without several hours of charging "somewhere."

The pack continues is gradual loss and I have to report that the road trips that included 125º+ temps did cause a bigger drop of .06- .07 verses the .01 normal nearly daily drops.  Despite all that, my first full charge since May 19th on June 28th for the Webasto Central WA trip still had good numbers. 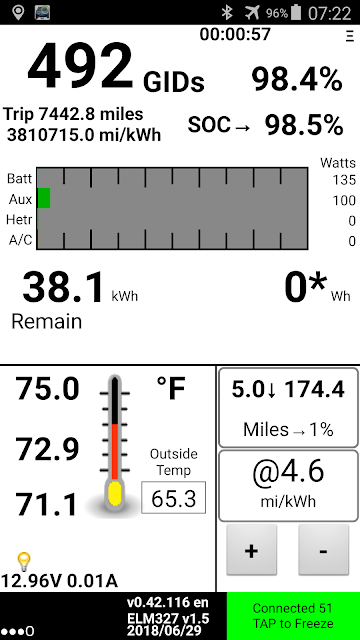 FYI; part of the good numbers was the charge went to 98.5%  which is not the highest but higher than most of the others that only hit the high 96's or low 97's.

Normally I would be posting charts extrapolating degradation out to a specific date like...day 500 or July 1st, 2019 but I am short of time. Right now I have to get things together for a plane ride so stay tuned!
Posted by DaveinOlyWA at 9:03 AM