Well for those who didn't know, I was out of town a few weeks for a family reunion back east, returning yesterday.  As always, when out of town there are things that we must consider when our LEAF sits patiently waiting our return.

Of course, you could elect to have someone drop you off and pick you up.  That was not as easy as I thought it would be since some of my options were headed the same place and weren't available.

A shuttle is also a consideration but I didn't even consider the option.  A quick search on Way.com found me a parking lot willing to do 12 days for $65 so I was in!

Finding a place to stay was done so the next thing was making sure the charge level on the LEAF  was enough to drive the 45 miles to the lot and have enough on the return to make it to a charging station for the ride home.  Although, the amount of charge lost would be unknown, I was confident it would be minimal.  I picked a 70% charge which worked out well putting me at 42% SOC. Not bad at all. 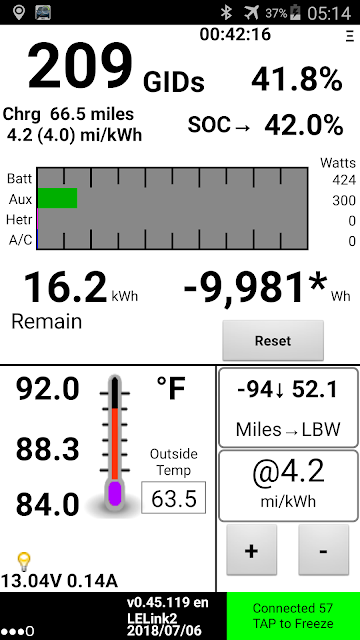 The trip was a two parter with the family reunion in Michigan. After that, I rented a car (gasser... ick!) and drove to see my Son who lived in the Cincinnati area.  In either case, its a 3 hour time zone difference.  Going there is ok but the return? Not so much.  Realize more than a third of us claimed to be affected by the single hour time change so 3 hours was going to be a challenge.  Selecting a 6:45 AM departure from Cincinnati (The airport is actually in Kentucky BTW...)  with a 47 mile drive to get there meant getting up at 3:00 AM to make sure I had enough time to drop off the car, go thru TSA, etc.  I did all that to get to the gate 52 minutes early only to have the flight delayed 20 minutes.  Realize that 3 AM Cincinnati time is MIDNIGHT Olympia time!

So I wanted my return to Olympia to be issue free.  IOW, I had to take steps to insure the car would start after sitting over 12½ days.  Unlike SL and SV LEAFers, disabling telematics I don't have to worry about so I only had to unplug my LEAF Spy dongle.

Well, the vacation went very well exceeding my expectations.  Tons of food, family and old friends. It was awesome!  Monday, I had a full day with nothing planned which allowed me to explore Cincinnati and wouldn't you know it? The World Club Championship Tournament was in town!

Like the World Cup, this is held every 4 years and involved  WFDF (World Flying Disc Federation) teams from 36 countries playing Team Frisbee; A cross between Soccer and Football.  The tournament was held in 3 different locations around Cincinnati and the one I visited in Lebanon, Ohio was a huge place with a lot of fields so I was able to walk around among the players. Very cool experience! 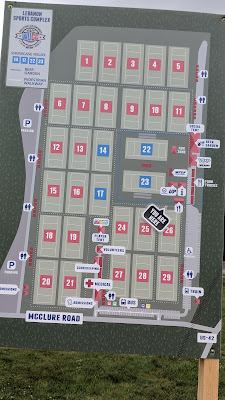 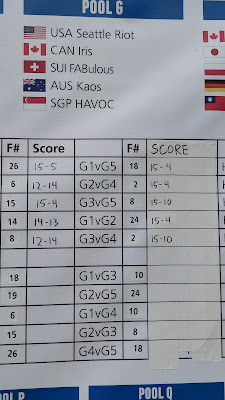 Seattle Riot; A women's team with a great
2-0 start to the tournament

Well, all good things must come to an end (hopefully before the bank balance!) so on a plane I went back to Seattle. With the exception of a few days and locations, the humidity was high and the temperatures were just as hot as the Pacific Northwest. I did see on the news where Puget Sound (and my car) had a string of days in the 90's.

Although the parking lot was described as a "self park"  the cars were packed into the lot like sardines which meant they had to be shuffled around when people returned to pick them up so my car was in a different spot so it was moved at least once. I didn't do an odometer check so not sure how much but guessed it wasn't much since I only lost 6 GID of charge. 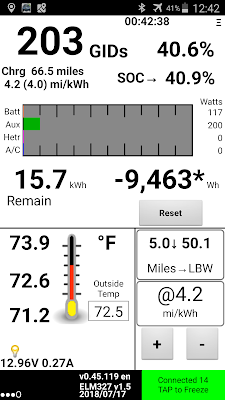 This I was happy with and right inline with my expectations. If you remember, (I would have been amazed cause I had to look it up!) in 2015 on my trip to Michigan, I parked my 2013 LEAF for over 22 days and only lost 9 GID.

So off I went pleased my batteries were cool despite the 90+ temps of the previous few days and plugged into the Blink at Tahoma Market and noticed I had lost a good chunk of battery capacity losing .6 ahr and .5% SOH.  Well, that was a bummer. I was hoping the pack was still not quite awake and I would regain something this morning but that was not the case. In fact, I lost another chunk!

Granted its all very early and still holding out hope that the numbers will go up. (They have NEVER gone up always remaining the same or dropping)

Right now, I am busy planning a road trip of 800 miles down the OR Coast so not a lot of time to think about what happened but did make a note to myself to select "covered parking" for my next vacation.

Back from trip and didn't make the 800 miles as planned as the Webasto QC station upgrades to cover the 2018 incompatibility stopped at Newport OR. I even went south to check both Yachats and Florence and neither worked.  I had called tech support and they did say 6 stations were upgraded and the rest were on hold due to wildfires in the vicinity so my trip was a more normal 650ish miles.

But the reason I mention it in this entry is the battery declined continued and I have to blame it on the storage of the car in an open lot. Without more evidence to the contrary, I can find no other suspects. 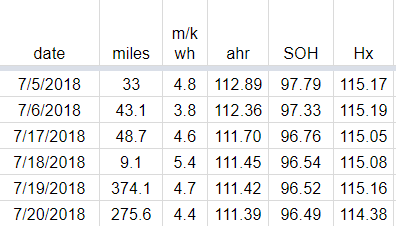 For clarification; The date listed is the date the mileage was driven but batt stats are taken on the next day.  So the key takeaway here is the July 6th reading was taken on July 17th when I returned and was taken immediately when I started the car to check to see how much charge I had lost which BTW was very minimal. (The only good news here)

Now, as you might guess, the driving on the last two days shown here was done mostly with a "warm" battery at least on day one of the trip.   Interesting that despite 12 QCs in two days, the battery seemed to hold up fine but in storage at a supposedly near perfect 42% SOC trashed it??

I guess I can possibly assume that I have simply taken readings too soon after the trip and the degradation from the 122º will simply show up tomorrow or something?  After all, after sitting in a 63º garage for the night, the pack was still in the mid 80's this morning.  But I have done this scenario several times and it didn't happen before and I strongly doubt it will happen this time. If it does I will edit the post again.

We are a day away from another heat advisory for the area with temps in the 90's for as much as the next 9 days before cooling back to the high 80's.  I will be keeping car in garage or shade as much as possible!
Posted by DaveinOlyWA at 11:26 AM