Is Volkswagen's Punishment For DieselGate Suddenly Become An Advantage?


In 2015, The US Government brought suit against Volkswagen for intentionally defeating the required emission testing for its "clean diesel" fleet.  For years, VW had confounded the auto industry in its ability to provide a powerful, high MPG car that easily met an increasingly strict diesel emission standard set by the United States.

Faced with indisputable evidence of tampering, VW admitted it had installed special software that would greatly reduce emissions (and power) during testing. Since the car was not actually moving, the reduced power levels went unnoticed.  As soon as the testing was done, the software was disabled and the VW with its power restored was passed.  But now its emissions were as much as 300% over the limits that other manufacturers were being held to.

Over half a million vehicles were involved having been sold and driven for years in the US.  If you were ever stuck behind one of them with the vents open, your "clean diesel" thoughts were right. They were far from clean.

Eventually courts levied up to 25 Billion in fines (the figure is inexact due to cost variances in the choices offered current VW owners) which included 2 Billion to be invested in public charging infrastructure evenly divided in 4 phases covering 10 years.  Phase one concentrating on completing a major highway network with stations ideally 80ish miles apart is slated to be completed by Summer 2019. 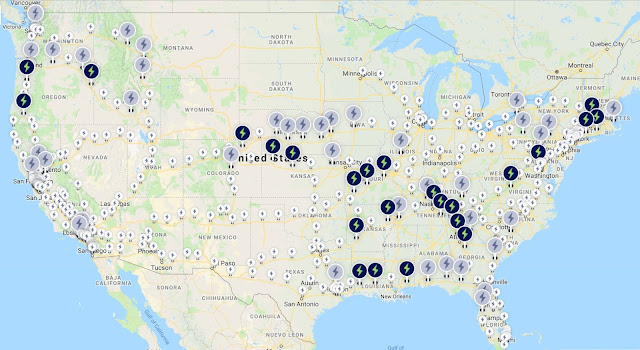 As of this writing, 30 locations are now open for business; many in key areas where other charging options are minimal or non existent. But one thing has become quite clear; The network is becoming less punitive and more advantageous to VW's future EV plans with every station opening up and it seems like we are all but accepting of that fact.

Tesla knew that their high priced cars would be much more attractive if they were able to be used well beyond their stated range. The Supercharger network exclusive to Tesla's allows exactly that to happen. Being an EV only manufacturer, it was easy for Tesla to make this mulimillion dollar decision but other EV manufacturers still rely very heavily on their carbon fueled products making an EV only investment of that magnitude that much harder to justify.  But the benefits of public charging are undeniable and most EV manufacturers have spent some money to that end. But a network that fails to cover the country end to end is exactly that; a failure.  A reason to keep gassing.

EA was created by VW to install and manage the network independent of VW... Well, at least that is what was stated on paper.

VW set up a new subsidiary called Electrify America to build the network independently from the company. The chargers will not be proprietary to VW and use Combined Charging System (CCS), CHAdeMO and open protocols like Open Charge Point Protocol (OCPP). 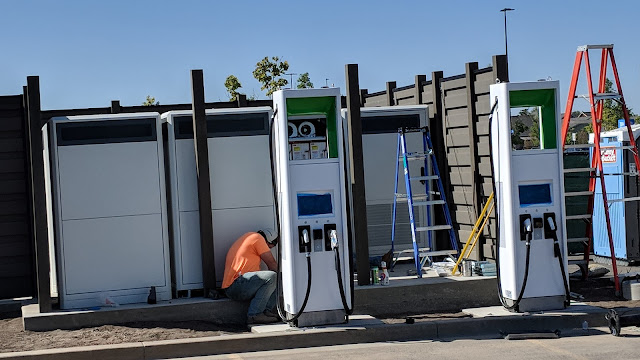 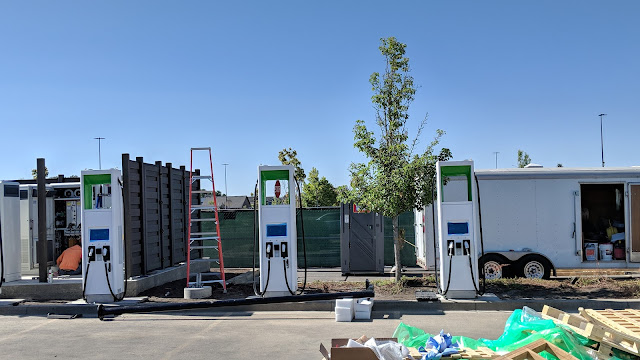 During my Oregon Coast trip, I took I-5 on the return so had a chance to see the Albany OR EA site at the Walmart there.  This site is advertised as having 4 CCS stations and one Chademo station implying that if you are the only Chademo compatible EV there, you are guaranteed a plug. This couldn't be farther from the truth.

In the top picture we see that the chademo plug is actually part of a dual format machine that anyone who has used EVGO would be very familiar with. Unfortunately (despite the additional power available) only one side can be used at a time.  These stations won't even queue a 2nd car despite rumors stating they do have the capability.

This means its possible a LEAFer or Souler could pull in with only ONE EV charging and not be able to charge if the ONE CCS compatible EV chose the dual format station.  Sounds ridiculous? It doesn't to me.  I have encountered a ton of clueless EVers out there including plug ins with only J1772 spending way more than a few minutes trying to figure out how to make the fast charger work.

Another thing to consider is Tesla's (except the 3) can use Chademo but not CCS which means even less likely to have access to the single chademo plug.

Ok so CCS is not a proprietary VW thing so how can they work it to their advantage?  How about pricing Chademo's out of the market.  EA announced pricing that includes a modest connect fee of a buck but an outrageous per minute fee.  Chademo is currently restricted to 50 KW (with no plans to upgrade) while CCS is slated to be at least 150 KW with 350 KW options for the upcoming 800 volt systems that will be hitting the streets next year.

The outrageously high per minute cost will all but guarantee that older LEAFs (ramp down happens around 40%) won't be taking up any space here.  Even the 30 kwh LEAFs and Souls (full speed charging to near 80%) will be cutting their visits short. With an 80 mile distance between chargers, they will likely not visit at all.

Finally (not really) don't be surprised when VW or Audi (VW in disguise) starts offering special sweetheart deals to EA's network. They have already delayed their big EV push so they won't be in direct competition price wise with Tesla or Chevy and their reduced fed perks.

All in all, a great way to minimize the pain of their penalty, right?  Too bad the government did not demand cash and hand it over to EVGO or someone else to spend on the network instead.

At this point, I would struggle to give them a C.  Many feel that they are doing a great job of rolling out the network since several have opened all in the last 6 months but EA is behind on its timetable having promised to have 200 plugs by the end of Q4 2018. That does not seem very likely especially considering the very slow progress being made in California.

Now if missing the timetable was all there was to it (Tesla's planned urban SC rollout has been MUCH worse) they would have scored better but the placement has been horrific.

Its quite obvious that EA is scrambling to play catch up desperate for host sites.  In my area when the entire Olympic Peninsula remains uncovered, they have placed two sites literally within 2 miles of each other in Everett WA. Why? mostly because that is how Walmart is. They swoop in and dominate the retail landscape and Everett was big enough to warrant more than one Walmart but 2 miles apart???

But that isn't even the worst example.  North Bend Outlets has been host to EVGO for years and soon, less than 200 feet away, EA will also be there!

Access is another story.  EVGO has dual format stations and although you can't queue your EV like Blink does, at least you have a parking space while you wait. Doesn't sound like much but its INVALUABLE on a busy weekend when the station is located at a mall or smaller parking lots where space is a premium.

But EA doesn't seem to understand that.  I am sure you noticed the EA Albany site that has 4 stations and only 4 parking spots. Design oversight? Nope. 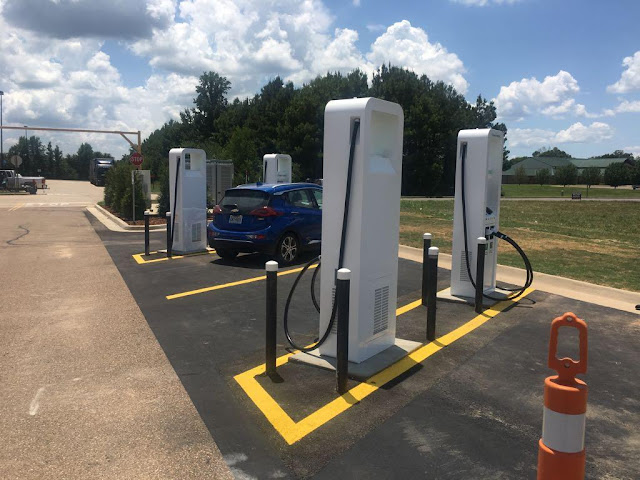 Now is this simply piss poor planning from EA? Or is it site host restrictions? If the locations were up front, I could see Walmart having an issue with giving up too many prime parking spaces but every site I have seen so far is located far away from the front parking spaces (A lesson EVGO needs to learn!!)  In fact; the placement of the stations in non prime parking areas is the ONLY reason why EA didn't get an F.   In all the pictures and site visits so far, the thought of stretching a cord from an adjoining parking space in the next row is not an option either. It almost seems as if to ensure cheap and easy access to feeder lines, green space was selected over blacktop.

Now, this is only phase one of four so holding out hope that things will improve with both location, access and balance but then again, the adage; "Its so bad, we can't possibly get worse" applies quite well here.

Looks like I am not the only one unhappy with EA...