As expected, my driving slows down a lot in Winter. Simply more into comfort food and Netflix I guess so only drove 935 miles. Since my needs were low, public charging becomes more of an inconvenience for the most part. I actually only charged due to need once, the rest simply because its free!

If you have not already heard, I had some HUGE hits to battery health all surrounding the two full charge events I had last month.  I lost 1.17% in health.  I went from an estimated 85% health @ 100,000 miles to less than 70% health (if using extrapolation from Day One)

Note; Keep in mind that battery stats are logged the day recorded but mileage is actually from the day before.  This simplifies the process for me as I can simply "write down everything I see"... Yeah, being lazy.   This is also the reason why you see a lot of entries where a lot of miles are driven the day after a full charge or an active public charging day.

Notice the same GIDs and kwh available on both charges?
But since that fateful first week of October, I have only lost .04%...or practically nothing. My Hx has also ballooned to 116.46% as well. Still kinda wondering what its measuring??

As mentioned above, I am relying a lot more on home charging but have been keeping my SOC between 20-50% for the most part. I plug in for 90 mins every morning before taking off for work saving QCs for my days off primarily.  This when my Hx started its rise. 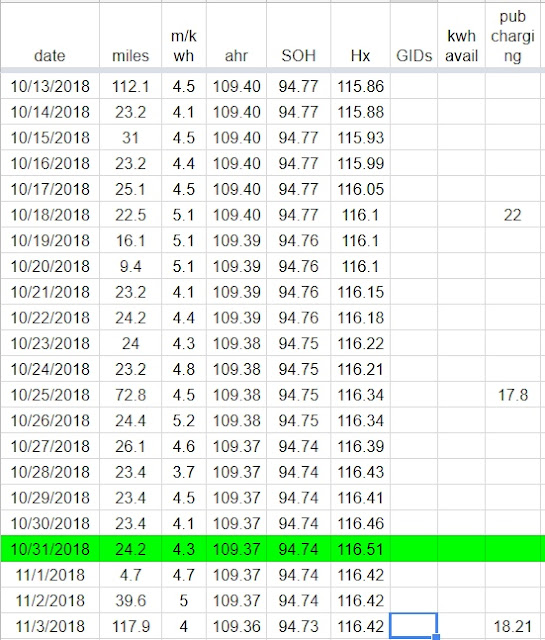 So what does this all mean? Well, its well established that 90% SOC is better than 100% and 70% is better than 80% for reducing the rate of degradation and this goes for ALL Lithium batteries.  So does the above mean that the 2018 is super susceptible to degradation at high SOC even in cool temps (both days, temps were in mid 50's to low 60's)

Probably not. As we all know, Nissan has had missteps with their BMS and LBC. I think what I saw was a pack recalibration by the BMS due to the very long period of time between full charges.  Remember the September and August drive reports? You know, the ones where I was bragging about how well my pack stood up? Well, I am thinking I saw 2 months of adjustment in 2 days is what happened.   Again, this means an SOH somewhere around 70% or less @ 100,000 miles.  Its more than enough range but to have it be that close to warranty exchange and not getting it would be very disappointing.

As always, the real takeaway here is its simply way too early to make any definitive statements as I have yet to notice any actual loss of range but as you can see, I have not been challenging the range lately either. I did do 117 miles the other day quite comfortably...

WA State realized the impact of being oil dependent decades ago so instituted a series of perks designed to reduce our fossil fuel addictions.  Most of us are only aware of the sales tax waiver for fully electric vehicles but that has not always been true. WA's awareness started with hybrids and the emergence of the Prius.  I purchased a 2010 Prius on May 19, 2009 that was also sales tax free.   FYI; No, Priuses were not going that cheaply especially the IVs. I received a special discount from Toyota (along with special early delivery.  The salesmen were much more interested in the car than I was! Remember the 2010 was the first major face lift after the Iconic version.) 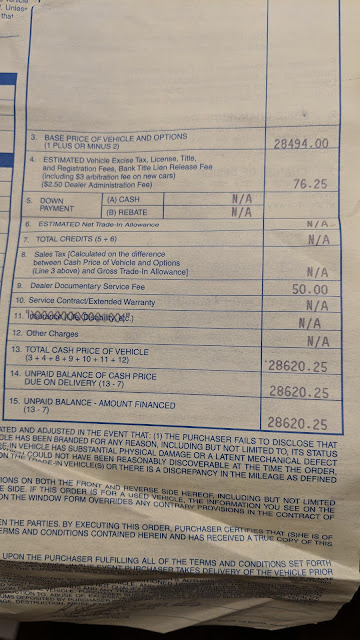 2010 Prius purchase contract May 19, 2009
Our legislators essentially passed a bill to extend EV sales tax credits but it failed to pass simply because they ran out of time. It was a short session by design and there simply wasn't enough momentum to push the bill higher up the agenda.  I can only hope that it will give time for the legislators to reexamine the bill and modify it to be more conducive to lower income households. As the bill stood, there were a lot of well to do households taking advantage simply because they could.
But now the state is investigating ways to increase revenue and one of the worst is RUC (Road Usage Charge). They came up with a cockananny formula of using the statewide fleet average of 20 MPG (thank you trucks and SUVs!) and the current gas tax to come up with a usage fee of 2.4 cents per mile.
IOW; someone somehow thought it was OK to penalize all the EVers and Hybriders who did what the State asked them to do and pay an equivalent of 100 to 200% higher tax to drive!  That is only half the problem since a usage tax does not take into consideration consumption which means there is no longer a disincentive to keep gas guzzlers of the road!
This is basically a "bait and switch" by the state.  We were "lured" into getting a highly efficient vehicle to help save the environment and reduce the hemorrhaging of cash taken by oil companies out of state and this is how we are treated??
I signed up and was accepted into the RUC trial program being run by the state. If you think that $150 EV tab fee is expensive, how about a bill equaling that EVERY 3 MONTHS?? 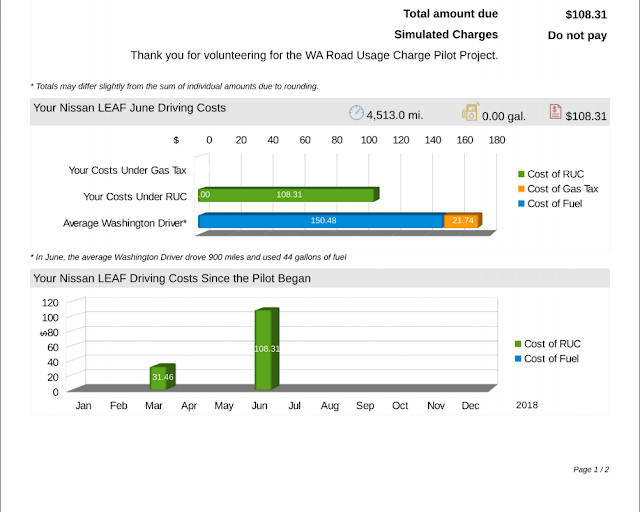 Quarterly Billing under proposed RUC program.
Here is a sample bill for 3 months driving only 4513 miles. Notice the chart? The average WA driver drives much farther than that and that is going up. Why you say?  The rising (its actually going down right now but its not like Seattle is suddenly affordable) cost of real estate has forced us to move farther and farther from work. Commutes are getting longer and more painful and there is no end in sight.
Know of anyone who would be hurt under this bill?  Definitely makes becoming a Uberite a much tougher decision doesn't it?  I personally don't understand the draw, but it seems like I know dozens of people doing Uber for extra money....
As always comment below.  My next blog concerns Electrify America or EA, the company put together to handle the public charging system the Feds mandated as part of VW's "dieselgate" scandal.  Sounded great, but VW is turning this "penalty" into an unfair advantage for its electric vehicles that will be on the road just about the same time Phase one of the penalty is completed, so stay tuned.